Whether a high-mix, low-volume parts manufacturer is new to automation or looking to further the use of automation at its shop by implementing cellular machining, standard automation packages are cost-effective and increase throughput, said Zachary S. Spencer, automation manager of robotics for Methods Machine Tools Inc. in Sudbury, Massachusetts.

“Anything we can quickly deploy and integrate to get machine shops churning out parts faster, that is our goal,” he said.

Spencer said the main difference between the two types of aforementioned customers is that those that have robots and horizontal pallet pool machine tools, for example, understand the productivity-boosting benefits that automated work cells provide, so that group doesn’t need to be convinced.

Those that are new to automation, however, need persuasion. 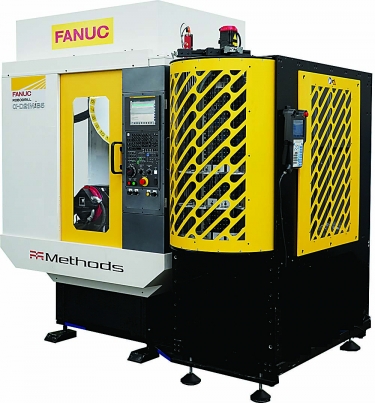 The rotary storage carousel on the Plus-K automation system can be filled with the number of workpiece carriers and extra tools required for the different workpieces to be machined, enabling end users to let the cell run.  Image courtesy of Methods Machine Tools

“They’re not used to setting up a machine and walking away from it,” Spencer said. “Everybody is always a little bit afraid of hitting that green go button for the first time. It’s really just a comfort level with having a yellow robot load and unload a machine rather than having a person standing in front of it.”

In addition to high-mix, low-volume production environments, the system is suitable for medium-volume jobs, Spencer said, because the robot is always picking from the same transport plate and not picking a specific workpiece.

Spencer said this arrangement enables an entry-level technician to load and unload parts at the machine instead of using a high-level operator, who instead can work with a more advanced four- or five-axis machine control. This is especially beneficial at shops where one programmer is responsible for programming all the machine tools.

“What we hear from customers pretty much every day is ‘I can’t find help’ or ‘I can’t find qualified help,’” he said. “Standard automation systems are a straightforward way to free up more machinists.”

In addition, Spencer said the Plus-K consumes about a third of the floor space of a conventional horizontal pallet pool machine and has a rotary storage carousel with 60 part/part carrier positions. 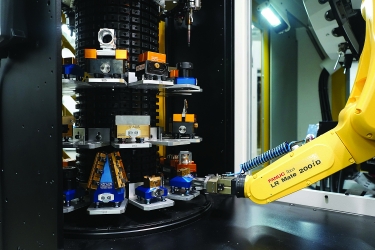 A robot collects a workholder and part from a Plus-K pallet. Image courtesy of Methods Machine Tools

He said one of the main applications for the Plus-K is making bone plates for the medical industry, in which two or three parts are produced before changing to the next one.

Although the Plus-K’s robot is enclosed for worker safety, Spencer said Methods Machine Tools is working on developing standard work cells with collaborative robots. He said cobot cells typically are designed to have less unattended run time and more ease of use for operators.

“Those are the ones we try to target to customers who are new to automation,” he said.

Initially, some employees at CDP Diamond Products were not convinced that Methods Machine Tools could automate the toolmaking process or that automation was the answer, said Steve Dillon, vice president of CDP Diamond Products. Once chips started flying, however, the staff was sold.

The work cell “has done nothing but boost my throughput,” he said.

Dillon estimated that the automation cell, which runs unattended on nights and weekends, increased productivity by 75% on the Robocuts.

“I’m getting more work because I’m able to produce more,” he said.

For shops looking to add automated cellular machining to operations, Spencer recommends starting with a part for which the cycle time and problem areas are well known, scrap is less than 10% and the job is repeating.

“If they are holding a tight tolerance on a couple of dimensions and scrapping half of the workpieces, maybe that’s not the best piece to start with,” he said, “because they are not always going to be able to diagnose what that issue is, whether it’s the robot or the machine.” 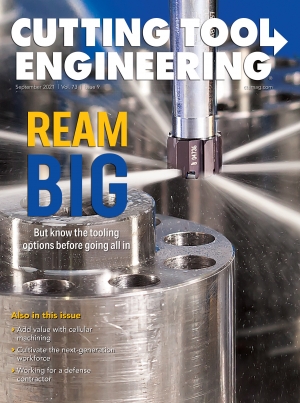