Several decades ago, after years of working as a machinist in his home state, Ohio native Sam Roberts decided to head south in search of manufacturing career opportunities. Weary from his 80-mile commute, he was ready for a change of scenery — and climate.

“I took the chance and drove to Georgia on my last paycheck and a prayer,” he said. “I baked cookies on Highway 5 in Douglasville for a couple of weeks until I found a manufacturing job.”

Through that job and a few others, Roberts honed his manual and CNC machining skills. In 1999, he was introduced to MastercamCAD/CAM software from CNC Software Inc. in Tolland, Connecticut. As a machinist proficient in G code, he was impressed with the software.

“When I saw Mastercam and had an opportunity to see what it could do,” he said, “I thought, ‘Wow, that’s impressive. That’s a lot better than typing in G code all day.’” 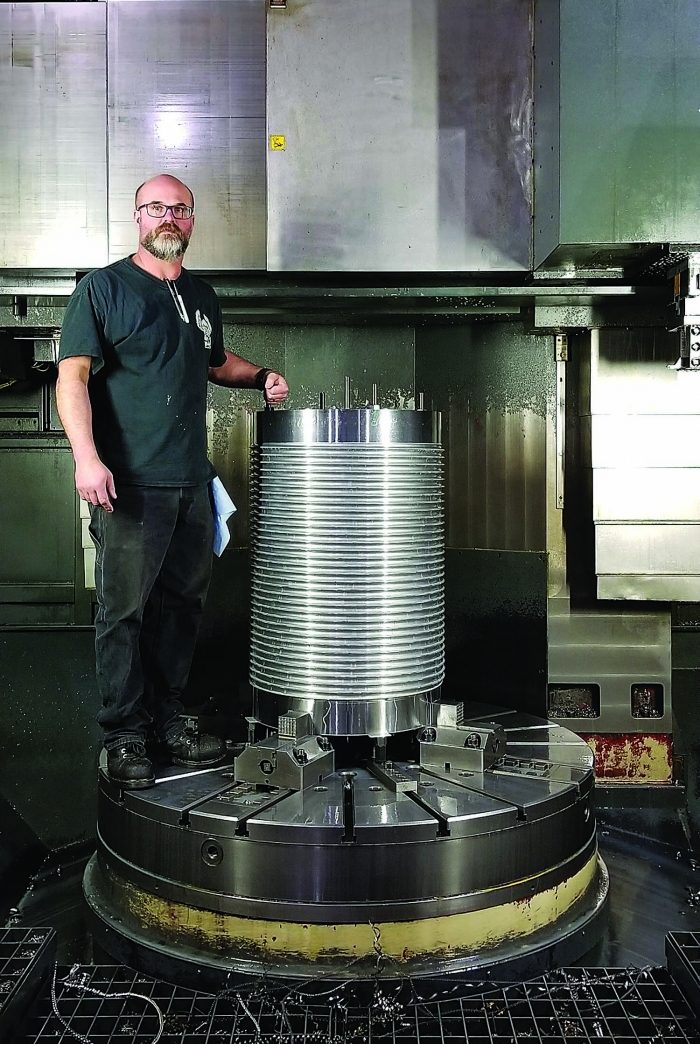 In 2001, Roberts seized a chance to run his own machine shop. Armed with Mastercam version six and a Haas VF-3 vertical machining center, he launched 3D-Machine Inc. Located more than 20 miles northwest of Atlanta in Powder Springs, the full-service shop specializes in precision milling and turning of parts ranging from less than 28 g (1 oz.) to 13,608 kg (30,000 lbs.). Industries served include hydropower and nuclear power, automotive, aerospace, communications and medical.

“I’ve got enough room to grow,” Roberts said. “We do a lot of shaft work, some pump work. We really do anything. If we think we can do it and not have to charge a crazy amount to make the part, we are not afraid to take something on. We’ll do whatever it takes.”

More than 20 years after his first encounter with his favorite CAD/CAM software, he still relies on it for his design and production needs. 3D-Machine stays current in Mastercam by using the latest release, which features Mastercam Mill, Mastercam Lathe, Mastercam Wire and Solids. In addition, the company participated in the beta program for Mastercam 2021. He appreciates the generous selection of toolpaths in the software.

The toolpath supports custom thread forms and expands support for modeling chucks and chuck jaws. The CAM software supports collet chucks as individual component types, which extends the range of machines that can be supported directly. The toolpath also streamlines and simplifies programming workflow.

By selecting chained geometry in Lathe Custom Thread, a programmer can choose the thread cross section or one of the following parametric definitions: rope, buttress, square or trapezoidal. The toolpath includes Mastercam Mill-Turn simulation enhancements, as well as support for select Swiss machining. 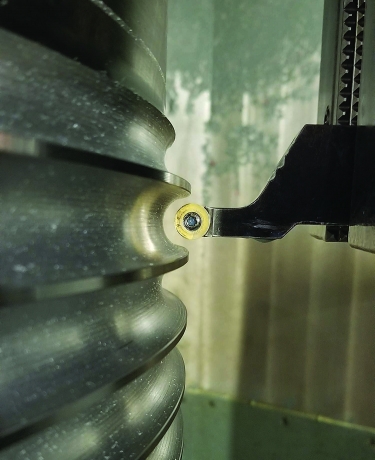 A close-up view is given of a hoist drum groove being machined on a vertical turning lathe programmed with Mastercam’s Lathe Custom Thread toolpath. Image courtesy of CNC Software

The part, a hoist drum, employs a wire rope or cable to lift or lower loads. The grooves keep steel cables from overlapping, which could damage them, and prevent inconsistent lifting and lowering of objects. Due to its size, the drum was machined on a large vertical turning lathe. The selected toolpath is not limited to vertical machining and just as easily can be performed on a horizontal lathe. In this case, the machinist cut a left-handed spiral, so the tool engaged in the cut from the bottom to the top to produce the shape.

“It took us seven hours to put in this groove, which — if you laid (it) out in a straight line — would measure 212 linear feet (64.6 m),” Roberts said. “We had to use a mill and a rotary to make, rough, then finish the part. We did the deburr on a VTL in seven hours. It’s just beautiful.”

Without the Lathe Custom Thread toolpath, part production would have taken at least 40 hours. 3D-Machine reduced production time for the hoist drum by 83%.

“It is very much like threading a part,” Roberts said. “The difference is you are roughing the thread using parameters typically found in straight grooving.”

To ensure that a shape is exactly what the company is looking for, he and his team rely on Verify, a CAM software feature that prevents tool collisions by letting programmers check for gouges, view finished part shapes and visualize inclusion of fixtures on a simulation screen. Productivity increases and problems are addressed before parts are cut. Programmers can confirm on a separate thread while continuing to program, saving production time.

Imagine a groove of any shape. If the chosen tool can profile that shape, the tool can be made to cut that profile at a thread pitch specified by a customer, Roberts said. Big parts traditionally would require large tools in a shape that matched the profile and would necessitate a lot of horsepower. Many parts need a follow rest to keep them from being pulled out of the chuck and center. 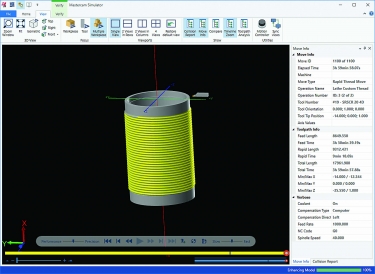 “Mastercam gives us an opportunity to take on work that other machine shops cannot do,” he said. “There are so many jobs that we’ve done because we do 3D surfacing. We have made several parts over the years that we never could have manufactured without CAD/CAM software.”

“When I create setup sheets, they include a description of the tool, a toolholder and required pullouts,” Roberts said. “If machinists follow those rules on the shop floor based on the pullouts that we give them, they don’t wreck the holder, they don’t hit clamps, they don’t have any surprises.”

Due to the number of fixtures designed and machined in Mastercam, he and his staff used the software to create a fixture database. They have acquired more than 100 fixtures so far. Anyone producing a part can bring a fixture and his or her part into the CAM software.

“It’s just a great tool,” Roberts said. “By maintaining a database of all our fixtures, we eliminated repetitive processes that we may have had to perform 20 years ago. Now we’re not reinventing the wheel every time we take on a new job.”

Having a reliable CAD/CAM reseller contributes additional value to 3D-Machine’s software investment. Based on his experiences with other software sellers, he rates the support provided by Steve Landkamer, owner of CAD/CAM Solutions Inc. in Snellville, Georgia, and his team as superior.

“Everyone at CAD/CAM Solutions is very helpful, very knowledgeable,” Roberts said. “I usually call Steve when I can’t figure something out. Most of the time, he can walk me through the process and get the issues resolved. They do a phenomenal job over there.”

Thanks to the flexibility of the CAD/CAM software, 3D-Machine can handle parts from less than 0.45 kg (1 lb.) up to 6,804 kg (15,000 lbs.). To date, the largest part machined was a 4,445 kg (9,800 lb.) oil rig valve. He said more than 50% of 3D-Machine’s work would not be possible without the software. In addition, the company boasts significant cost savings by taking advantage of conversion tools in the software.

“I used Mastercam to design and machine a lot of products,” Roberts said. “I’ve designed in it, I’ve drawn up assemblies in it, and I’ve taken parts of the drawing and assembly and converted them from metric stock material to inch. By performing this conversion, we saved $23,000 in material because metric material is so much more expensive in the United States.”

As for expanding business, the company plans to launch an e-commerce website to sell 3D-Machine’s original products, including a coolant nozzle block.

CNC Software Inc. is based in Tolland, Connecticut. For more information about Mastercam CAD/CAM software, call 800-228-2877 or visit www.mastercam.com. 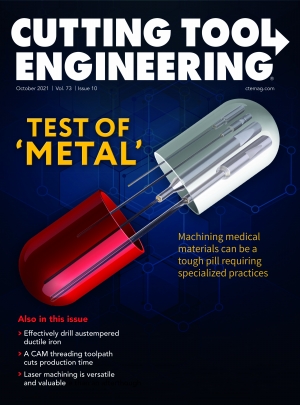