A faster spindle speed increases the removal rate of a machine tool, but the cutting tool and toolholder assembly must be more balanced and rigid than what runs on a slower spindle. Raym-Co Inc. realized that after the job shop installed 25 new DMG Mori machine tools with maximum spindle speeds from 15,000 to 20,000 rpm to replace 8,000-rpm machines from the early 1990s.

“We definitely saw an increase in the ability to hold tolerances and a decrease in cycle time,” said Raym-Co Vice President Brandon Artibani, “but not as much as we had hoped.”

The Farmington, Connecticut, manufacturer was founded nearly four decades ago and operates about 60 CNC machines at its 3,437-sq.-m (37,000-sq.-ft.) facility. The shop primarily serves the medical and semiconductor industries, as well as aerospace and defense.

“We are open to anything,” Artibani said.

He said the company initially cut only plastics but eventually diversified into metals and now cuts “a ton” of aluminum, stainless steel and titanium. Plastics, such as acrylic, polycarbonate and PEEK, still account for about half of the jobs.

Raym-Co had been holding tools in collet chucks, side lock holders and milling chucks. Artibani said he was hesitant to test shrink-fit holders because he was not familiar with Haimer products and their price points were at least double what he was used to spending for holders.

“I just couldn’t justify spending more on a holder upfront,” he said. “It seemed irresponsible to spend that much just to have someone slam it into a vise.”

Nonetheless, Artibani agreed to test a few shrink-fit holders and was asked to run any job that the shop previously ran using a proven program, with the only change being the toolholder.

“Instantaneously,” he said, “there was a difference in the sound. All the cutters ran whisper quiet.”

Artibani also said tool life increased up to 300% on some tools. 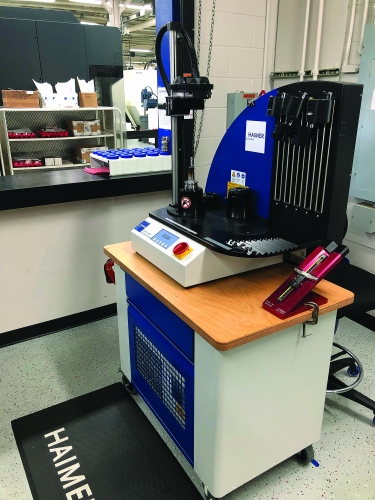 “After that,” he said, “we just started cranking the feed rates up until we got to where we were either snapping cutters off because the cutter couldn’t hold up or we were at the limitations of the machine. Now we incorporate that into our everyday programming, so the speeds and feeds are three times what they used to be on average.”

Even at elevated cutting speeds, vibration is not a concern.

“Chatter issues just don’t exist anymore,” Artibani said. “If we have chatter, it’s because the machine is shaking on the floor.”

He said he quickly learned that holding tolerances was effortless with the shrink-fit toolholders. Raym-Co holds ±0.005 mm (0.0002") on location and hole size without having to try.

To heat a holder’s bore so it expands enough to accept a tool shank and cool it so the tool is held solidly in place, Raym-Co took the recommendation of Mike O’Connor, regional sales manager at Haimer USA, and purchased a Power Clamp Economic Plus NG shrink-fit machine with an adjustable coil and two bases. 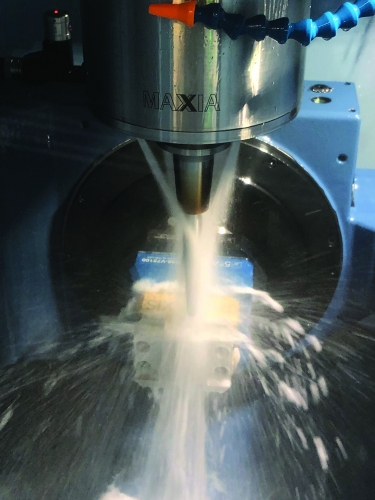 Raym-Co reports that it was able to triple or quadruple machining parameters after switching to shrink-fit toolholders. Image courtesy of Haimer USA

“You can heat one tool and move it to the side and have it in the cooling area while you heat a second tool,” Artibani said about the benefit of an additional base.

He said this capability enables Raym-Co to set up a shrink-fit holder as quickly as or quicker than assembling a collet chuck, primarily because a collet chuck must be checked for runout. Heating a holder consumes 10 seconds while cooling it takes 30 to 60 seconds.

“It is extremely rare that the tool is running out,” he said.

Artibani said runout occurs mostly when a toolholder is not cleaned properly before accepting a tool shank. To correctly clean a holder of any carbide residue or other debris, operators clean the bore with an appropriate-size wire brush and thoroughly wipe the holder with rubbing alcohol.

“Cleaning is actually the most important part of the process,” he said.

Since implementing shrink-fit holders into its operation, Raym-Co no longer uses mill chucks but still uses collet chucks for a lot of drilling and tapping and uses side lock holders for work that doesn’t require a tight tolerance.

“I would say 80% of our tools,” Artibani said, “such as endmills, are going in a shrink-fit holder — and even a lot of our high-end drills. If we are doing deep-hole drilling, we want high precision and are putting those in shrink fits.”

He said the solid-carbide and HSS endmills that the shop applies range from 0.2 mm to 32 mm (0.008" to 1.26") in diameter, and shrink-fit holders are suitable for roughing and finishing.

Artibani estimates that the return on investment was about three weeks for the first purchase of 15 holders and the shrink-fit machine. After purchasing 30 more holders six months later, Raym-Co has added another 30 each year.

“My return on investment was probably more instant than anything else I have purchased for the company,” he said.