Once confined mainly to laboratories and medical facilities, USPLs have become increasingly popular machining options over the last decade, thanks to lower prices and more-rugged designs intended for industrial settings.

For machining applications, one of the main selling points of USPLs is that they shrink—and sometimes eliminate—the heat-affected zone. “The pulses are so short that heat doesn’t have time to be absorbed significantly, or at all, into either the material you’re cutting or adjacent structures,” explained Ramsey Cook, business development manager for the micro-processing group at Trumpf Inc., Farmington, Conn., a USPL manufacturer.

If a manufacturer cuts a thin line into steel with a USPL, Cook said, the laser vaporizes steel molecules, leaving little melt or debris along the cut. 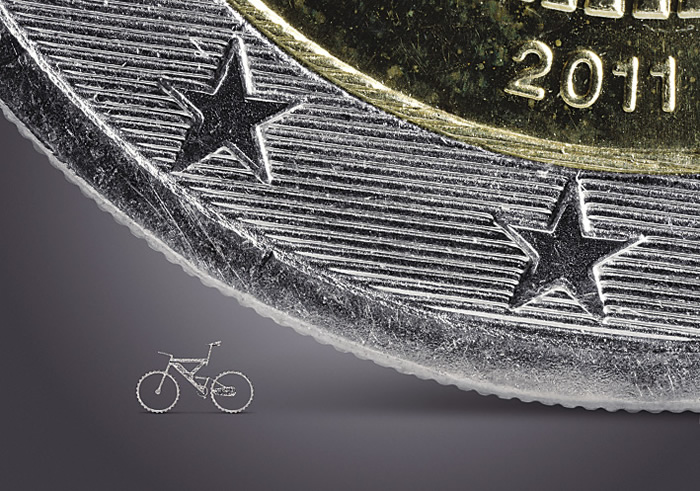 Cut by a TruMicro picosecond laser from Trumpf, this “bicycle” is dwarfed by a 2€ coin. Image courtesy Trumpf.

The idea is to eliminate secondary operations. "If you’re cutting metal heart stents, for example, you would prefer not to do any post-process operations to clean them because that improves throughput," said Jimmie Bates, director of operations and business development for Altos Photonics Inc., a USPL seller in Bozeman, Mont. "So you make the cut with a femtosecond laser, and you’re good to go."

Another advantage of ultrashort laser pulses is they cut transparent materials. "If you use a long pulse in glass, the beam might go right through it because there’s no absorption," said Ronald Schaeffer, CEO of PhotoMachining Inc., Pelham, N.H., which uses USPLs for micromachining. "When you get down to very short pulses, you actually have absorption in some of these otherwise transparent materials."

USPLs are used to cut and drill thin parts made of almost any material. In the U.S., Bates noted, there’s growing demand for femtosecond lasers to drill automotive nozzles. The medical device market is “growing quite large” as well, he said, with femtosecond lasers being used to make products like heart stents, catheters and guide wires, as well as for consumer-electronic applications such as cutting hardened cellphone glass.

In addition to those markets, Trumpf’s picosecond lasers are widely applied in the aerospace industry to cut turbine blades and drill engine holes, Cook said. He also sees welding of disparate materials while minimizing heat as a possible "new direction" for USPLs.

As for USPL downsides, Schaeffer noted processing is relatively slow, "so you want to stay with thinner materials." Anything over 1mm is generally considered too thick for USPLs, he said.

Cost is also an issue. Although prices are decreasing, the devices can be anywhere from three to 10 times more expensive than longer-pulse lasers, Schaeffer said.

In addition, cost of ownership is higher because it’s more difficult to keep USPLs running at their specified performance level over the long term than other types of lasers, Bates said. "We are making great strides in producing more-robust lasers, and there are now thousands of picosecond and femtosecond lasers in 24/7 production environments. But they’re a more-complex beast than a fiber laser, and, generally, that means they’re going to require more maintenance."

On the other hand, Cook said USPL owners benefit when it comes to cost per part. He pointed out that using a USPL to drill thousands of holes that require little post-processing is much more cost-effective than applying a cheaper drill but then spending a lot of time and money to remove plenty of burrs and debris and smooth rough edges.