Need a keyway or internal spline cut into an oversize part? Consider calling Reliable EDM Ltd., which bills itself as the largest EDM shop in North America. Unlike most shops, the Houston company specializes in unconventional EDMing of tall, large and otherwise unique parts.

Reliable is a family-owned business led by founder and President Carl Sommer, along with some of his children and even a grandchild.

“We take pride in helping our customers solve their big-part problems,” said Carl’s son Phil Sommer, vice president of operations. “After 32 years, it still excites us to hear a nervous customer ask about the capabilities of EDMing a large part and hearing them breathe a sigh of relief after hearing a bold ‘no problem’ from us.” 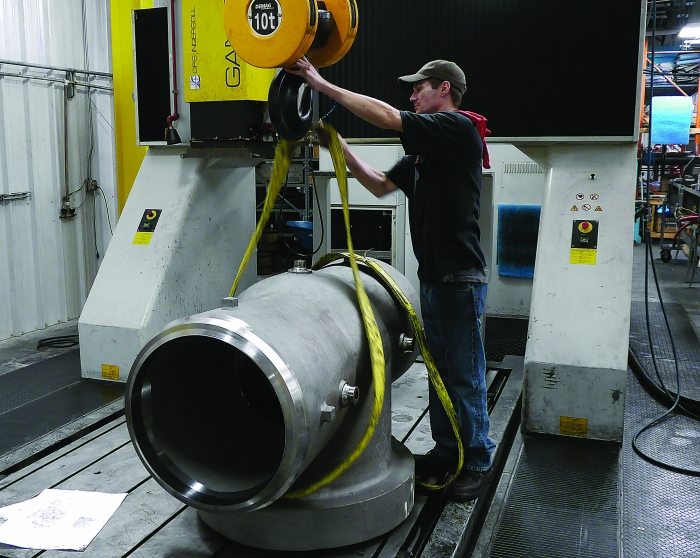 “There are some jobs EDM just can’t do, but if a customer comes in, we’ll try to figure out a way,” said Carl’s son Steve Sommer, senior vice president. “If it’s physically possible, we’ll design the tooling and electrode holders or fixturing to make it work.”

Reliable’s specialties include wire EDM, which uses spark erosion with a brass wire to cut a wide variety of shapes, and sinker, or ram, EDM, which uses a machined graphite electrode to erode a specific shape from a part. The shop has more than 80 EDMs.

Compared with machining processes like milling, EDM is relatively slow and more difficult to perform. Wires can break and must be rethreaded through the partially finished part. Sinker EDM requires designing and machining the graphite electrode—and milling graphite is a filthy job. The sinker process also calls for the part to be immersed in oil or another dielectric fluid, which can be messy and cumbersome, especially in the case of large parts.

On the other hand, EDM has many advantages:

“EDM is a spark erosion process, so any material that conducts electricity is eligible, from aluminum and copper all the way up to tungsten carbide,” Phil said. 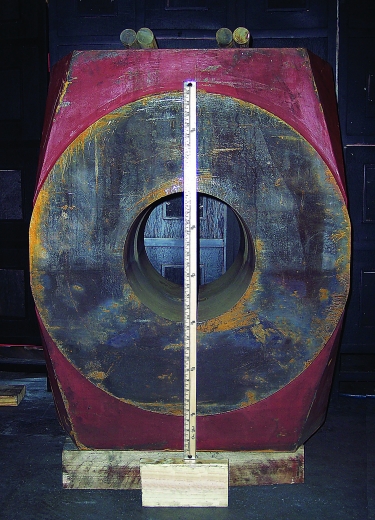 Reliable was able to cut out test specimens from this 40"-tall blowout preventer
using wire EDM. The company can handle parts weighing up to 10,000 lbs.

“One of the beauties of EDM is that some alloys, like Inconel and Hastelloy, are harder and a lot more difficult to machine, but for EDM, hardness doesn’t make a difference,” Steve said. “Carbide is very dense and slower to EDM, but it is conductive, so we can still do it.”

Phil noted that EDM is usually the answer for parts that cannot be machined conventionally in a cost-effective manner. “On most of our tall-parts work, EDM is the only option. However, we are now finding that we can compete with conventional machining on certain parts.”

Reliable creates a wide range of long keyways, internal helixes and deep cavities in parts that generally can’t be produced with an endmill or other more conventional cutting tools, according to Steve. “We can also create splines deep inside a long part that go through the entire length.”

One of the most interesting tall parts the shop made was a 48"×4" solid rod through which Reliable wire-
EDMed a cutout of the state of Texas that extends all the way through—an amazing piece that couldn’t be produced any other way.

Reliable takes on any job that other shops can’t machine conventionally or cost-effectively. 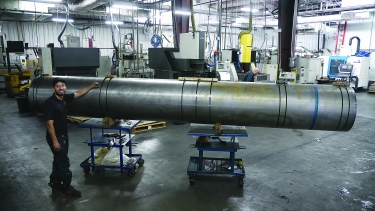 A customer needed this 16'-long, 27"-dia. tube cut in half lengthwise.
The tube was too large for the machine, so Reliable modified a standard wire EDM to machine it.

“A lot of times, if there’s a run of 100 parts, a shop might find a way to machine it or make tooling for it,” Steve said. “It might cost $8,000 to make a broach for a keyway in a part that’s 3' long, but if they’re just doing one or two pieces, EDM is going to be more cost-effective.”

The company sometimes does production runs on a detail inside a part in which EDM is the only way to remove the material. Engineers often design parts specifically for that process.

What Is Too Large or Tall?

Reliable buys some of the biggest machines available. “We start with those and then modify them,” Steve said. “Our biggest ram machine, the Ingersoll 2000, has close to 5'×10' of X-Y travel with 4.5' in Z, so we can do a lot of big parts just by having a big machine.”

The company specializes in creating workarounds when machines are not large enough for a part. It has cut a pipe in half that was over 40' long with wire EDM and can wire EDM a part up to 62" tall or thick.

According to Steve, with sinker EDM, Reliable has cut a part over 30' long, but it is not going through all 30'. “We would extend such a long part off the table and then just work on one end of it, either building a tank to hold the oil around it or trying to submerge the area where we’re doing the cutting.”

One of the largest ram projects completed at Reliable was a stepped keyway 4"×25.5" long in a giant part that weighed 4,900 lbs.

“If we can get it off the truck and into our building, we usually can EDM the part,” said Phil, who noted the many instances when the company had to rent heavy-duty forklifts to load and move certain heavy parts.

The company has also been known to move an EDM to accommodate a large or heavy part.

Challenges to EDMing large or tall parts include some loss of accuracy with increased part sizes.

“As a general rule for wire EDM, the taller you get, the more difficult it is to keep the wire in tension,” said Steve, who explained that when cutting a keyway through a 30"-thick part, the keyway will tend to be wider in the middle than at the ends. “So you would either have to skim that out or do secondary cuts to leave material in there,” he added.

Before taking on a job, the experts at Reliable try to determine whether the tolerances specified by the customer are doable. 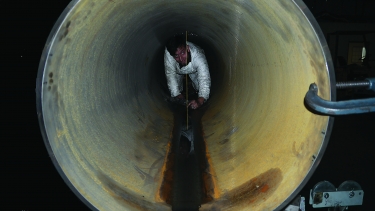 A Reliable employee had to crawl into the tube to thread the wire for the EDM tube-cutting operation.

Tolerances also are more difficult to hold when sinker EDMing some large parts—for example, when submerging the part becomes difficult and it must be extended off the end of a machine. The challenge is holding the electrode steady inside a deep or large part to prevent any vibration. “In those cases, you have to pay special attention to designing the fixtures to do the burn,” Steve said.

Another challenge is setting up a large part for EDMing and aligning it, especially for parts held off the table.

For large parts, referencing a zero-zero point and locating the starting position is tricky, according to Steve. “If you have a big, long pipe and you’re trying to get the inside diameter where you can do the cut, you have to put a probe in there and pick up your part, and that becomes a challenge too.”

With its strong emphasis on customer service, some of the largest equipment available and many years of successfully EDMing tall and large parts, Reliable strives to distinguish itself.

“Our staff of experienced machinists enjoys the challenge of out-of-the-ordinary parts,” Phil said. “This type of work makes our company very interesting.”

A Talent for Teaching

Reliable EDM’s Carl Sommer began his career in 1949 in a Brooklyn, N.Y., machine shop. His career took a dramatic turn in 1970 when he became a high school teacher in New York City, during which time he wrote a book on practical solutions to problems in education, Schools in Crisis: Training for Success or Failure.

Another twist in his career path occurred in 1978 when Carl moved his family to Houston and went to work at a tool and die maker, progressing to the level of manager of operations. Then in 1986, Carl purchased a single wire EDM and struck out on his own with the help of his sons. 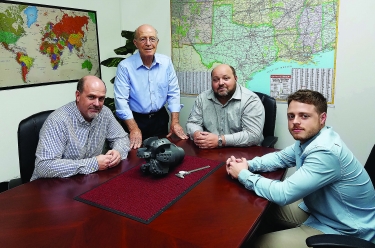 Using his talent for teaching, Carl wrote and distributed pamphlets to educate prospective customers about the benefits of EDMs. Eventually, those pamphlets became a college textbook, The Complete EDM Handbook, written with his son Steve. Carl has also recorded educational videos on all aspects of EDM, which are available on the Reliable EDM website.

But according to Carl, his greatest career achievement has been using his success in business and education to write and publish more than 100 award-winning books teaching character and social skills to children. His latest project, with the help of his son John, is a new phonics-based literacy program that will incorporate the children’s books.

“The real purpose of Reliable EDM is to make money for my publishing company and video studio so that I can help children succeed,” Carl said. 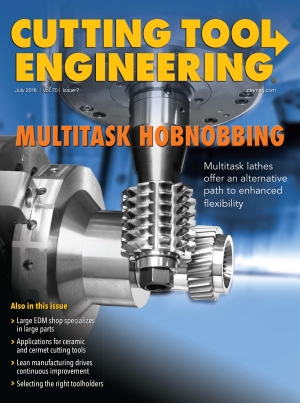