OEMs and other manufacturers frequently require special machines for production and assembly purposes. About half of Coldwater Machine Co.’s business involves building those machines, but few off-the-shelf components are available. Therefore, Coldwater machines the components in-house at its 132,500-sq.-ft. manufacturing facility in Coldwater, Ohio. And, many of the parts are large.

But it won’t be the company’s largest machine for long. “Our next purchase will be a much larger mill,” said Dan Barry, vice president of sales and marketing. 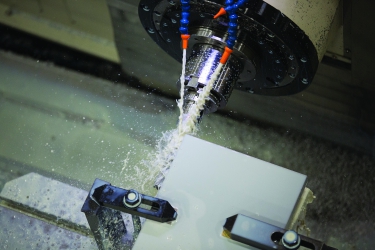 “We want to move from the boring mill concept to a 5-axis gantry mill, a bridge mill,” Zoda added, noting that CMC was considered more of a boring mill shop when it operated quite a few massive manual mills during the 1980s and ’90s. “We’ve always had the capability to machine large parts.”

According to Zoda, manipulation and setup pose the greatest challenges when machining large parts. When CMC must maneuver big, heavy parts through the shop, it relies on overhead cranes. The company has 10 cranes, with capacities that range from 5 to 25 tons (4.5 to 22.7 metric tons).

“Pretty much every foot of our facility is accessible by an overhead crane,” he said.

To reduce setups and part movement from one machine to another, Zoda said CMC is adding multitask machines. Last year, CMC purchased a DMG Mori NTX 2000 5-axis multitask machine, which can handle components up to 24" (609.6mm) in diameter with lengths up to 60" (1,524mm). The NTX 2000 joins three other DMG Mori machining centers on the shop’s floor for a total of more than 45 machine tools for milling, turning, boring, drilling and grinding.

By reducing setups and part movement, a multitask machine enables CMC to spend more time making chips. “It also, theoretically, leads to a more accurate part,” Zoda said. “Every time you take the part and put it on another machine, there is a chance for errors: setup error, operator error and dimensional error. Multitasking is the technology we are pursuing here at Coldwater Machine.”

When the company purchases a new machine tool, it may not have to create a foundation for the machine. Instead, it may be able to use a foundation that already exists from a previous piece of large equipment, Zoda said. That was the case for the NTX multitasker, which rests on a foundation initially created for an older bridge-style surface grinder. Some foundations are made of 4' (1.2m)-thick concrete. 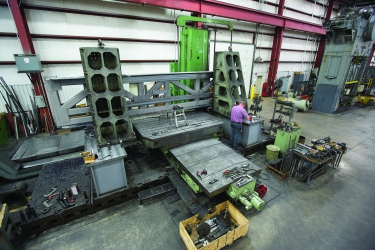 This 1968 Wotan boring mill has a 260" X-axis travel. Image courtesy of Coldwater Machine.

Investing in new machines, such as the four purchased last year, doesn’t necessarily mean that CMC is looking to discard all its vintage models. “We have some good machinery in here,” Zoda said. “It’s older, and it’s important for us to keep that older machinery in good working order to hit the tolerances that we pursue.” The company regularly holds tolerances as tight as ±0.0002" (5.1µm).

In addition to being large, many of the parts Coldwater Machine produces are made from workpiece materials that are challenging to cut, including Inconel, titanium, tool steel and Hastelloy, as well as 15-5 and 17-4 stainless steel. For instance, Zoda said roughing heat-resistant superalloys previously involved running the tool at a relatively slow cutting speed and removing a lot of material—hogging it. That approach requires high-horsepower, high-rigidity
machines.

A more effective method, according to Zoda, is to take lighter cuts at a higher feed rate. “You might be only taking a 0.030" DOC but at 250 sfm. You remove a lot more material that way.”

He added that CMC—with the assistance of a tool engineer from its supplier—regularly tests high-feed milling cutters and other cutting tools when preparing for a new project that involves a difficult-to-machine workpiece material. “The supplier comes in, takes a look at the project and says, ‘I recommend this tool, and I’ll bring one in and see how it works.’”

Those projects, however, don’t involve large quantities of parts. “We don’t do production runs,” Barry said.

“A huge production run for us is maybe four or five parts,” Zoda added.

Barry said the exception is the temporary production of about 90 different parts for lift-truck manufacturer Crown Equipment Corp., New Bremen, Ohio, whose plant was severely damaged by a tornado. CMC expects to continue to machine Crown parts, but in smaller runs, after the Crown Equipment plant is repaired.

In addition to investing in equipment, CMC expanded its facility last year by adding 27,500 sq. ft. The addition doubles its build area, which is dedicated to assembling automated manufacturing systems. The addition provided a reprieve from the crowded conditions, enabling the company to reduce its backlog while positioning for growth, Zoda said.

“We were just building things up all over the shop and in every corner,” he said, adding that one automotive line had to be built in a horseshoe shape along several walls because there wasn’t enough floor space. “Our forecast indicated that we were going to have the opportunity to get a lot more business if we expanded the facility.” 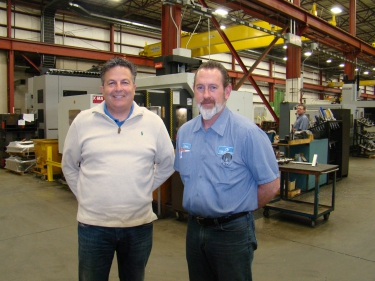 CMC serves three industries, with each constituting about a third of its business, Barry said. They are automotive, appliance and aerospace, which is grouped with energy.

Barry added that CMC is fortunate to have a diverse array of customers, including a handful that represented nearly all its business in the past. The company is looking to become more geographically diverse as it expands its base to, for example, customers in the packaging industry. Achieving that goal might include expanding outside of Coldwater. “Here in the U.S., we are always looking for an acquisition,” Barry said.

In addition, the company is placing service personnel in remote locations. “We just put a technician up in northern Ohio to service the customer cluster there,” Barry said.

The biggest challenge CMC faces in continuing its expansion in Coldwater and beyond is finding workers with the needed skills, Barry said. To help overcome that issue, the company, which employs more than 120 people, has long run a 4-year apprenticeship program. Completing the program requires 7,424 hours of work experience and 576 hours of classroom activity. CMC currently has six apprentices. 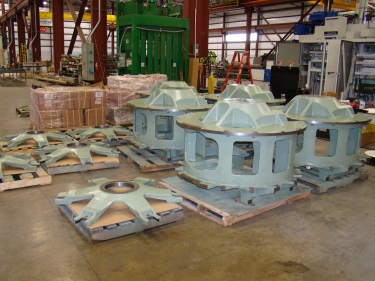 A sampling of the large parts Coldwater Machine produces. Image courtesy of A. Richter.

Barry said the apprenticeship program has significantly helped increase the company’s skilled workforce, but it’s not enough to keep up with CMC’s growth. “We are constantly looking for new talent. Clearly, there are not enough skilled labor resources in the United States.”

Retiring workers just compound the challenge. Zoda said three toolmakers recently retired. “There is no possible way to replace the knowledge those guys brought to the table.”

With a number of other large manufacturers nearby, Barry said the area is under full employment, making the competition for skilled labor fierce. One more obstacle to attracting workers is not just a lack of affordable housing but a lack of housing.

“People want to live here,” Barry said. “It’s hard to believe because we’re a long ways from everything, but there are no available houses here. Most sell by word of mouth. You can’t get a house through a realtor. I bought my house on a handshake deal.”

CMC is doing better than most to attract and retain skilled workers. Zoda said he has become creative about hiring people who are not specifically toolmakers or maintenance technicians. In addition, workers are cross-trained to enhance their versatility on the shop floor, and the company continues to invest in multitask machines.

“Instead of one machine for one operator, a machinist can run two or three,” Barry said. “They won’t need to make all the different setups. That’s our future.” 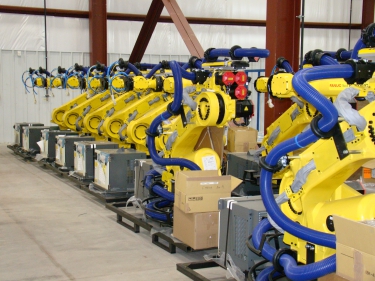 FANUC robots in the build area will be configured into an automated production system. Image courtesy A. Richter.

CMC sees how its manufacturing customers struggle with their internal resources when delivering equipment for installation. A decade or so ago, Barry said, customers had millwrights, technicians and other personnel to install machinery. Now CMC frequently takes care of everything.

“We put it on the truck, take it off the truck, rig it through the plant, put in the power drops and do all the utilities,” he said. “It’s 100 percent turnkey. That puts more demand on our services.”

Barry added that Coldwater Machine is even discussing with one customer a partnership arrangement in which CMC would conduct preventive maintenance and, ultimately, run the customer’s
machines.

For now, the company is focused both on growing with the aid of flexible automation equipment and on continuing to create a work atmosphere that is conducive to low employee turnover while attracting fresh talent.

“We have a great workforce with a great work ethic,” Barry said. “That’s a given around here.” 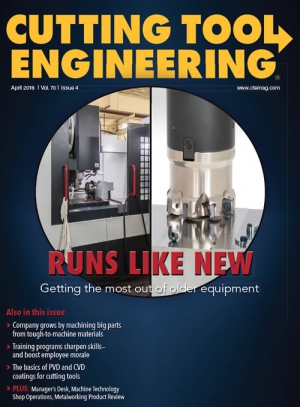