Researchers in Germany think they’re close to developing a more economical alternative to machine tools for many milling applications.

The alternative is a robot arm for precision machining. Conventional industrial robots can be used for milling but are no match for machine tools when it comes to precision. Primarily because of the gear units, robots have relatively low stiffness, which translates into increased tool deflection during milling operations. As a result, robot milling is unsuitable for applications that demand tight production tolerances. 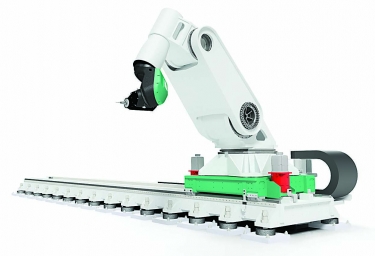 Researchers at three institutes of the Fraunhofer Society in Germany aim to change that. The researchers joined forces to produce a robot capable of precisely milling various materials, including aluminum, carbon fiber-reinforced plastic and steel. The goal is to complete a functional prototype of a robot, dubbed Flexmatik, by the end of 2018.

The Flexmatik design is based on a conventional 6-axis industrial robot arm equipped at the end with a milling machine electrospindle. The spindle can be fitted with a milling, drilling or grinding tool, which the robot arm positions anywhere within Flexmatik’s workspace to machine a workpiece. Machining processes will be run by a conventional CNC for machine tools.

If the researchers succeed, however, Flexmatik’s milling capabilities will go beyond what’s possible for a conventional robot arm. “Our goal is to achieve part accuracy for milling operations of approximately ±0.1mm for the first part,” said Sascha Reinkober, Flexmatik project manager and head of the manufacturing technologies department of the Fraunhofer Institute for Production Systems and Design Technology in Berlin. (The other Fraunhofer entities involved in the project are the Institute for Structural Durability and System Reliability and the Institute for Manufacturing Technology and Advanced Materials.) Flexmatik will be capable of achieving the target accuracy right from the beginning of a machining process, with no calibration or process adjustments necessary, Reinkober explained.

He said conventional industrial robots are incapable of precision milling because they aren’t stiff enough to accurately follow a programmed toolpath when acted upon by forces generated by the machining process. To keep Flexmatik from straying too much from its programmed path, the robot’s axes will be equipped with what Fraunhofer researchers call “partially direct drives.” Reinkober described a partially direct drive as a patent-pending hybrid. On one hand, it includes a direct drive that has the stiffness to handle high-process loads. On the other hand, it has a conventional motor-and-gear drive system that allows the robot to make fast, smooth movements during machining.

Flexmatik will also feature an active vibration control system and a climate control strategy that the researchers say minimizes machining imprecision due to temperature fluctuations. System simulations performed by the researchers indicate that the Flexmatik design, which includes these features and partially direct drives, can achieve a ±0.1mm tolerance starting with the first component.

To make the design more versatile, the researchers mounted the robot arm on a linear rail, giving Flexmatik a workspace comparable to that of a large portal milling machine. Even without the rail, the workspace of an industrial robot with a 2m-long arm is much larger than that of most machine tools, Reinkober noted.

Perhaps Flexmatik’s greatest advantage will be the savings it offers. The researchers believe that the system could cost as much as 90 percent less than a conventional milling machine and consume at least  90 percent less energy. Also, unlike a portal milling machine, Flexmatik does not require a special foundation, reducing construction costs and increasing setup flexibility.

The researchers think Flexmatik will be able to handle jobs in nearly all sectors in which machine tools are used. But the goal is not to consign machine tools to the scrap heap of history.

“Machining processes like milling, drilling or grinding can have accuracy [requirements] of 1µm or less,” Reinkober noted. “Even if you optimize the robot, you will never be able to reach the accuracies of a machine tool.”

Many machining applications, however, don’t require such high accuracy, he added. These include chamfering and deburring, as well as machining very large and additive-manufactured parts. In these areas, the machine tool may soon have to cede turf to a money- and energy-saving challenger.