The value of bitcoin has fallen more than 50 percent this year, but more than half of those who already own bitcoin and other cryptocurrencies said they plan on adding to their portfolios, MarketWatch Inc. reported.

This high level of interest in cryptocurrencies is grabbing the attention of companies across the gamut of industries, including metalcutting. For example, Rego-Fix Tool Corp., Whitestown, Indiana, now accepts bitcoin as payment for purchases of its Swiss-made tooling products. Checks, credit cards and Automated Clearing House will continue to be offered as payment options, with bitcoin added to provide additional convenience and to simplify payment processes for a global customer base, according to the company. 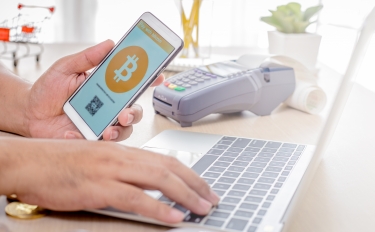 “We believe that cryptocurrencies will become a major force in national and international transactions,” stated Andreas S. Weber, president of Rego-Fix. “When it comes to manufacturing, we are a high-tech company. We want to expand that focus on technology to other aspects of our business, such as new forms of transactions between companies.”

He predicts that the number of bitcoin payments will be small initially, until it hits critical mass. “We expect ‘early adopter customers’ who look into the future and start experimenting with cryptocurrencies to be among the first to pay with bitcoin.”

Customers enter an invoice number online to receive a QR code that enables them to pay a Rego-Fix invoice through digital currency exchange Coinbase, San Francisco. The fundamental transaction moves from the customer’s bitcoin wallet on a peer-to-peer network without the need for a central bank or administrator.

Although bitcoin may not remain the largest cryptocurrency by market capitalization, one will become the main currency for blockchain-based, business-to-business transactions, Weber noted. “We plan to adapt as new currencies appear on the market.”

According to Weber, the high volatility of a currency such as bitcoin doesn’t mean it is unmanageable. “We are a multinational company and are used to dealing with foreign currencies. We are comfortable to manage the risks and uncertainties of such transactions.”