Manufacturing is an energy-intensive activity. The U.S. government estimates that manufacturing consumes about one third of the energy used in the country, stated Scott Hibbard, vice president of technology for Bosch Rexroth Corp., Hoffman Estates, Ill., in his paper “Six keys to sustainable manufacturing.”

“By far, the majority of [the consumption] is motors,” Hibbard told Cutting Tool Engineering.

Reducing the amount of energy the motors on a metalcutting machine tool use is one way for a parts manufacturer to increase its competitiveness—or even to just remain an ongoing concern—while “greening” its operations. “Even before the economic downturn, I heard from people who make machine tools that their customers were telling them, ‘Power prices are driving me out of business and you have to find ways to cut energy use,’ ” said David Dornfeld, a professor of engineering at the University of California at Berkeley, whose research includes environmentally conscious manufacturing. “The point is you shouldn’t be [reducing energy consumption] like giving to a charity because it makes you feel good. You should be able to make some money off of this.”

According to Hibbard, a method to reduce a machine tool’s energy consumption is to replace a single-speed motor with a variable-speed or servo drive. Traditionally, variable-speed drives were used only when an end user needed a motor that operated at different speeds in an application and servodrives only when there was a high-precision requirement, such as specific acceleration or CNC positioning. “It was always thought of as way too expensive to use those,” he said. “In many applications, you can throttle down the motor with a variable-speed drive to consume less energy, especially if you’re wasting energy with friction and turning it into heat. For every dollar increase in a barrel of oil, the payback comes sooner.” 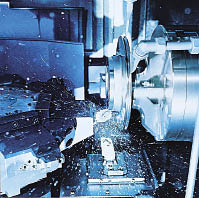 He added that instead of wasting that energy, it can be reused within a plant similar to how a hybrid vehicle’s regenerative braking system helps charge the battery pack when the vehicle brakes or decelerates. “On machines that have a lot of accelerations and decelerations, a scheme was devised to take that energy coming back, rechop it into AC and return it to a three-phase line—the main line,” Hibbard explained. The energy is returned from the drive when, for example, a spindle or any axis drive decelerates and can either be stored within the plant or used to power other energy-consuming equipment. “We’re going from consuming to producing,” he said. “We’re feeding energy out and selling it back to the power company.”

That scenario isn’t possible on a single-speed motor that’s not controlled by a drive because the electronics are not present to retrieve the energy.

Larger machines with a 12,000- to 15,000-rpm spindle are already likely to have such a system in place because they have more power returned when the spindle brakes. Smaller machines may not have used it, but that may be changing as the price of energy rises, and companies are pressured to consume less energy from the power grid.

Hibbard described the equipment needed to reuse energy as “basically a power bridge. In other words, another set of semiconductors similar to the ones used to control the speed of the motor, except this second bridge is now rechopping and reassembling the power to match the frequency and phasing of the power lines supplying voltage to the machine.”

Another energy-saving option is to not return energy to the main line but to use a shared-bus or common power supply drive system to reconsume regenerated power within the machine by analyzing and tuning the machining cycle to make the best use of the energy. That might involve accelerating one motor while another is decelerating.

Although cycle analysis tools are commercially available to achieve the highest efficiency, end users can save energy without them. “Some of it you can eyeball,” Hibbard said. “The easiest way to do it is to set up a machine, run it, record axes acceleration, current and velocities and then look at where the energy is being consumed,” he said. Energy might be saved, for example, by slightly altering the tool change cycle so the spindle is decelerating at the same time the Z-axis is accelerating toward the tool magazine.

Hibbard noted that the energy reduction process generally begins with hiring a consultant, but simple, no-cost steps can be taken. “Turn the darn thing off when you’re not using it,” he said. “But you’ll also find that most vendors of the energy-consuming devices in the machine have some good input on what can be done to reduce energy, either with the existing equipment they have or what the payback would be in altering equipment that’s on the machine. People shouldn’t think they have to go out and spend thousands of dollars to start saving energy. They can start with what they have on their floor right now.”

Machine tool selection also provides an avenue for reducing energy consumption. Compared to building and machining with a stand-alone lathe and a stand-alone milling machine, a multitask machine can require less energy, according to Dornfeld. “A machine that combines turning, drilling and milling in one machine gives you reasonable or substantial energy savings in both the use of space as well as what went into making and operating the machine itself,” he said. “That’s not even if you include the floor space reduction and the energy it takes to makes that floor space and heat, cool and light it.”

Dornfeld said the semiconductor industry is an example of a manufacturing sector that realizes the advantage of achieving more performance from each square foot of fabrication space because of the complex and costly processes for producing semiconductors. “Some of those ideas, presented to more conventional manufacturing, have a lot of opportunity,” he said. 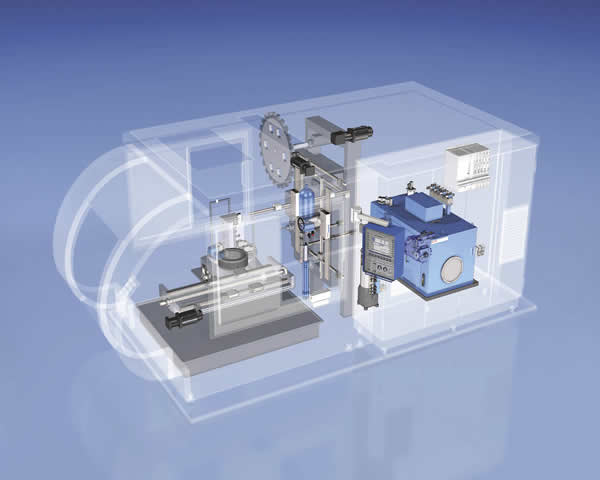 In every phase of a machine life cycle there will be different options to undertaking energy-efficiency measures. The most effective way is to consider these during the concept and modernization phases.

STAMA reported that the energy savings can reach 80 percent when the machines are operated in “ECO-Mode,” realizing a saving in energy costs up to about $1,800 per year per machining center. In that standby mode, when the machine isn’t in production the peripheral units and feed axes can be shut down sequentially in phases, and the machine can be activated immediately by pushing the start button.

A self-reactivation system is also integrated into STAMA machining centers. With that, for example, users can set coolant equipment to a cyclic intermix of coolant water on the weekend’s nonproductive hours without having the full machine on power. “We can shut down the machine but the program will call up a different machine cycle to, say, activate a coolant pump to cycle coolant intermittently during the plant shutdown so it doesn’t get rancid,” said Michael Herman, STAMA’s director of sales.

To further reduce energy demand, the braking energy during deceleration is fed back to other components on a STAMA multiple-spindle machine via electrical drives. The machine’s internal energy management system uses the energy gained from braking systems and feeds that power back to the peripheral units, such as the hydraulic pump and air suction unit. STAMA noted that the machine will use this energy and not feedback or supply the public electrical network with energy.

It’s important to consider the cost per square unit of floor space when selecting a machine tool and justifying its purchase. However, that is less of an issue for U.S. manufacturers because of the relative availability of open space for factories. “In Europe, they have it detailed down to the square meter what the rental is and what the power cost and consumption is,” Herman said.

A machine conserves energy when it isn’t making chips, but profitability comes from maximizing the amount of a machine’s metalcutting time. Therefore, reducing cycle time is another method for reducing power use, and one way to achieve that is by machining at a high spindle speed. “In terms of energy use per unit of material removed,” Dornfeld said, “high-speed machining looks much more efficient because you have constant power and variable power.”

Variable power is based on the chip load being taken during machining, and constant power is for running a machine tool’s peripherals. “Constant power is often greater than the power you use for cutting metal,” Dornfeld said. “In a sense, the less time you cut the more power you save. So high-speed machining looks quite good from not just the point of view of productivity, but it saves you energy.” 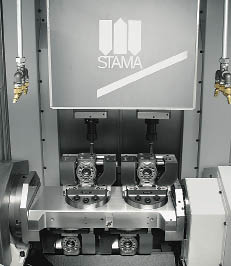 Whether it’s reducing energy consumption, recycling materials or minimizing consumables, “green” and “sustainable” manufacturing are often lumped together, but Dornfeld emphasized the need to distinguish between the two. He noted that sustainability has three legs: the capital requirements for assessing business investments, the impact machine operation has on the environment (which includes energy consumption and recycling) and the social impact, which is hardest to determine.

“The definition of sustainability is you shouldn’t do anything that limits the opportunities or reduces the livelihood or quality of life of someone in the future,” Dornfeld said, adding that how manufacturing fits into that definition is difficult to define. “What I’ve started to focus on is how to make manufacturing processes as green as possible. It’s certainly in our best interest to make these processes as green as possible and to have them contribute to sustainable development as much as possible.” CTE 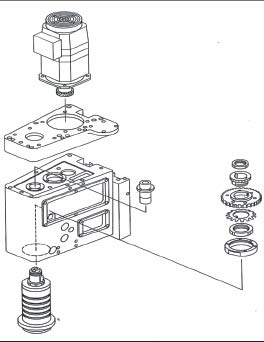 A diagram of a gear-driven spindle from Kitamura Machinery.

Machine tool users can save energy by considering gear-driven spindles when selecting a machine tool. According to Kitamura Machinery of USA Inc., its gear-driven spindles allow Kitamura to use the appropriate-size spindle motor and save 40 to 50 percent in kilowatt hours compared to more commonly used direct-drive or integral spindles.

To achieve the same cutting capacity as a gear-driven spindle, direct-drive and integral spindles use a higher-horsepower motor, which consumes more power. By stepping through gears, Kitamura says its machining centers can generate high torque at low speeds for roughing, and run at high speeds for finishing.

With three high and three low gears, the company’s gear-driven spindles are typically powered by 18-hp motors to create 116.1 ft.-lbs. of torque. That compares with 23.6 ft.-lbs. of torque for a 30-hp motor driving a 20,000-rpm integral spindle from another machine builder, according to Kitamura’s Koji Ishiura. “In the U.S., manufacturers cannot cut labor much so they have to cut their costs somewhere else,” he said. “One place is power consumption.”

In recognition of the energy efficiency of gear-driven spindles, in 2000 Kitamura received the 20th Japan Industrial Machining Union Award from the Japan Machinery Federation in the category of “best energy saving technology.”