Rebuilding a CNC machine takes skill and money. Is it worth it?

My brother and I once spent an entire summer rebuilding a 1967 Chevrolet Chevelle. We stripped it down to the chassis; sanded, scraped and painstakingly reassembled its parts; and then installed a hopped-up 327 small-block V-8 and an M22 4-speed transmission. We had no money left for a paint job, so we left it mottled primer gray and called it done. It was hard work, but nothing compared to rebuilding a CNC machine tool.

Nonetheless, machine tools and hot rods are similar in that both have electrical and hydraulic systems, sheet metal enclosures and hundreds of components. Both have a drivetrain, a power source and a carriage to which everything is attached. When rebuilding either, these components must be cleaned; inspected; repaired, replaced or remachined; and, in the end, reassembled and given a shiny new paint job. The similarities, however, end there. Fast cars might have been good for cruising on a Saturday night, but properly functioning CNC machinery pays the bills day in and day out, year after year.

A 46" Bullard vertical turning lathe before and after rebuilding. Images courtesy of Pyramid Rebuild and Machine.

About the only original element that stays is the iron, Leigh said, which on older machines is “30 or 40 years more stable than when it left the factory.” He warned that rebuilding is expensive, but the result is a machine that is as good as, and often better than, the original.

In addition, once you’ve had several similar machines rebuilt, maintenance costs tend to come down thanks to interchangeability of parts. “We have one customer for whom we’ve done four machines, and they’re able to keep spare parts in stock because the components used during the different rebuilds are all largely the same,” Leigh said. “It simplifies things.”

Remanufacturing also provides an opportunity to extend a machine’s capabilities, in some cases dramatically. Pyramid routinely equips manual crank- and gear-driven machinery with variable-speed servodrives and augments the graduated hand wheels with linear encoders and digital readouts, turning an old clunker into an easy-to-operate moneymaker. Other examples include converting a 1953 vertical boring mill into a mill-turn machine by adding a C-axis and live tools and turning manual roll grinders into sophisticated CNC grinding machines.

“Some companies prefer to start with an old machine tool and have us modernize it,” Leigh said. “For instance, I’m working with a customer that’s looking for a horizontal boring mill. I recommended that he find a machine that was originally built as a CNC or an NC machine. That way, we don’t have to take out the lead screws you’d find in a manual machine and replace them with ballscrews. Obviously, any candidate should be in relatively good condition, and if it has hardened ways and the spindle speeds you’re looking for, that’s a plus. But, most of all, it should have good iron, preferably from the U.S., Japan or Germany.”

Jim Cavorle, president of Cavco Machine Tool Rebuilding Co., New Milford, Conn., said the most important part of the machine rebuilding process is defining the scope of work up-front. A big part of that means understanding what’s wrong with the machine in the first place. “Many shops wait too long before having a machine rebuilt, and they end up with problems like uneven wear on the slides and improperly adjusted ways, which, in turn, trickles down to other machine components. They actually make matters worse by pushing it longer than they should.”

Establishing a preventive maintenance program for machines is a good idea, but with respect to a machine targeted for rebuilding, routine inspection of critical machine components and solid record-keeping are more important. Together, these will help a machine rebuilder identify what needs to be fixed and how much effort the rebuild job will require, avoiding surprises once the machine has been disassembled.

Another bit of advice is to “shoot” new machines with a laser or check them with a ball-bar device to establish a baseline and determine if anything is “out of whack” from the start. “This is critical,” Cavorle said. “It’s a sad fact that the geometric accuracy of a lot of CNC machine tools isn’t as good as advertised or they’ve been installed incorrectly.” End users should know that before using the machine for the first time. 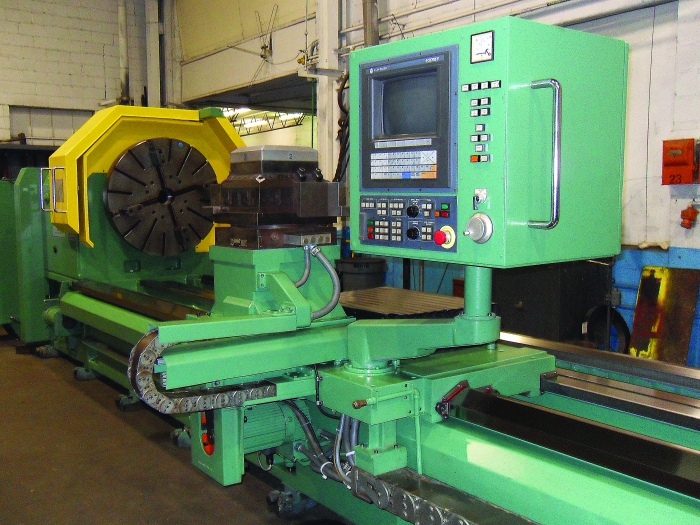 Updating the machine control is a common practice with most CNC rebuilds and conversions. Image courtesy of Machine Tool Service.

Both rebuilders suggest that these projects can easily run into the hundreds of thousands of dollars and take several months to a year to complete. This may seem reasonable for a $500,000 boring mill but disqualifies many smaller machines because the price of a new one is often less than a rebuild.

When deciding whether it’s time to give a tired soldier a new lease on life, a rule of thumb is to spend no more than 60 percent of its replacement value on a rebuild, according to Jim Perry, president of Machine Tool Service Inc., Terre Haute, Ind.

Perry’s  first manual-to-NC machine conversion was completed in 1968. He equipped a Kearney & Trecker with Kellogg telephone switches and an IBM card reader.

“We had a guy call in the other day who wanted to rebuild his vertical machining center,” Perry said. “A new VMC with similar specs would have cost just over $100,000, which is much less than I would have paid for the parts, never mind the labor. Unless a manual machine costs around $160,000 new—and a CNC around $250,000—it’s not worth rebuilding.”

As a result, Machine Tool Service has begun offering new Republic Lagun equipment to those faced with scrapping a machine that has outlived its usefulness.

Perry explained: “We kept getting calls to rebuild Bridgeport-style turret mills or small engine lathes, which we can’t do. It’s just not feasible anymore. We took over that line so we’d have something to offer them.”

Sadly, this means that many lower-cost machines are destined for the scrap heap once they’ve reached the end of their usable life. One lower-cost alternative is what Perry calls a “realignment,” where the machine tool is mechanically realigned for accuracy but the spindle bearings, motors and screws are left as is. But, he pointed out, neither he nor his customers are usually happy with this approach because “something nearly always needs fixing” and the customer is left with unexpected expenses.

Still, some companies are willing to pay a high price to keep their vintage Monarch or Cincinnati functioning. A Knoxville, Tenn., company with three American Pacemaker lathes is a case in point.

As Perry explained, these are “just run of the mill, 20" by 72" engine lathes,” and the company could have bought two comparably sized imports for the price of one rebuild. “They said they’ve been there and done that and wanted their old machines made new again. So we did it, and they were happy with the results.”

The Rebuild Option for Grinding Machines

The productive life cycle of any grinding machine is limited because its accuracy and reliability deteriorate over time. How long that takes depends on the machine’s basic structure, how often and hard it is used, and how well it is maintained.

Shops that carefully track machine utilization find that downtime of 20 percent or more of available machine time—because of unanticipated stoppages, adjustments and maintenance—generally represents an unacceptable burden on scheduling, maintenance operations and profitability.

One key option available to recover grinding production capacity is rebuilding the machine. Shops can also retrofit it with selected upgraded technology, repurpose it for work different from the grinder’s original intent or replace it with a new grinder.

Rebuilding or overhauling a grinding machine involves entirely disassembling it and examining every mechanical, electrical, pneumatic and hydraulic system. Components are replaced or repaired where necessary and requalified to OEM standards. Every nut, bolt, rivet, hose and pipe gets the same treatment. Newer technologies, such as monitoring devices, may be added. Other updates can include items such as LED lighting and controls. Except for its basic structure, which is abrasive-blasted and repainted, the reassembled grinder is essentially new.

A full rebuild costs about 75 percent of the price of a new machine. A typical rebuild cycle might be 15 years—longer if the machine is lightly used and well-maintained. But that span is much shorter if the machine runs three shifts a day, every day, with minimal maintenance. Large, specialized grinding machines, such as those for critical aerospace applications, are prime candidates for renewal via a comprehensive rebuild.

An obvious alternative to a worn, unreliable grinder is replacing it with a new machine. In many cases, however, the choice between rebuilding and replacing is not so obvious. Cost considerations play a key role in the decision to rebuild or buy new.

The 25 percent savings of a rebuild compared with the price of a new machine is much less significant when applied to the price of a new, basic 3-axis production grinder than it is relative to the purchase of a multimillion-dollar machine engineered for specialized work. Perfect examples of such systems are those that grind aerospace blades and vanes.

Confused about the terms “rebuild,” “remanufacture” and “retrofit”? Let’s start with the simplest of the three.

To turn a manual knee mill into a CNC machine requires installation of servomotors; positional feedback mechanisms, such as glass scales or rotary encoders; and a CNC. This is called a retrofit. The machine that is being retrofitted should be in excellent mechanical condition—otherwise it’s like putting lipstick on a pig.

An end user can get a like-new machine by rebuilding it, which means stripping it down to the iron, scraping the ways and replacing the electronics, bearings and other mechanical components, then giving the machine a fresh coat of paint.

The next level beyond rebuilding is remanufacturing. This means doing everything just listed plus equipping the machine with additional, usually custom, capabilities, such as adding a grinding head or live tooling.