To compete, high-mix, low-volume parts manufacturers are well-aware that they need to spend as much time as possible in the cut rather than setting up. Chucks with quick-change jaws let them do just that.

In addition, quick-change jaws help shops overcome the skills gap, according to Steve Hartung, group product manager for rotational workholding at SCHUNK Inc., Morrisville, N.C. Shops can easily train less-skilled operators to quickly and accurately change a chuck’s soft jaws, also known as top tooling or inserts, via a simple-to-use tool and, in many cases, avoid having to rebore the jaws.

For example, Hartung said the SCHUNK PRONTO quick-change-jaw system (shown) only requires an operator to turn a T-wrench 90° to remove an insert and turn another 90° in the opposite direction to install a new insert for a new job. The process consumes about 5 seconds per jaw and provides a repeatability of 25µm (0.00098"). And to further enhance productivity, a robot can easily be programmed to swap the PRONTO inserts.

“That’s another advantage of the system,” he said.

Moreover, reducing the time it takes to change the workholding setup on a chuck from one job to the next provides a fast return on investment for a quick-change chuck jaw, which has a higher acquisition cost than a standard soft top jaw. 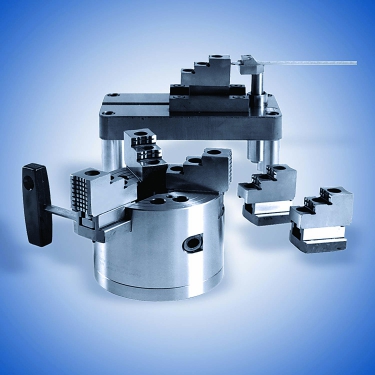 Lee Chase, CEO of QCS Workholding LLC, Houston, said the nominal setup time for a proficient worker to change standard jaws is 15 to 20 minutes. The process typically involves breaking the bolts, finding the required jaws, removing the jaws from the previous job and replacing them with the ones for the new job. “And usually, for accuracy, you’re going to have to rebore them,” he added.

Chase knows the process well because he ran a lathe when the company started as a job shop. “About the fourth time we changed our standard jaws in a day, I said, ‘There’s got to be a better way,’” Chase recalled. “The next day, the owner had the first prototype made.”

Chase explained that the company’s inserts, which are made of mild steel, are bored like soft jaws. After a shop initially bores the inserts, they are placed back on the master jaws for repeat jobs, the program is changed and the job is run. To achieve a repeatability of 0.0005" (12.7µm), an insert must be placed back on the same master jaw it was bored on, which requires properly numbering the master jaws and their inserts. 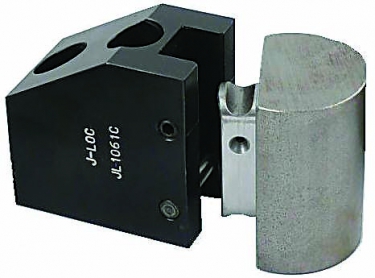 “You just take your standard jaws off and replace them with our master jaws,” Chase said. “Theoretically, you don’t ever want to remove the master jaws once you bolt them on. All your adaptation is done with the inserts.”

To make the inserts more economical, they are reversible, he added. “You can bore each end of a set of inserts for a different diameter.”

It’s important that the chuck maintains as much jaw force as possible at the lathe’s maximum speed.

According to B.J. Lillibridge, vice president of Pratt Burnerd America, Kalamazoo, Mich., a typical wedge-style power chuck loses more than 60 percent of its jaw force at maximum rpm because centrifugal force causes the jaws to pull away from the part. To provide a higher gripping force, PBA offers a chuck with a lever-wedge design for its quick-change chuck jaw system.

The wedge moves the actuator block, which also functions as a counterweight, Lillibridge said. As a result, the chuck is counterbalanced for speeds up to 6,000 rpm and will typically maintain 80 to 90 percent of its jaw force at the top speed. He added that because PBA’s quick-change-jaw chuck is counterbalanced, customers can use full-size master jaws and, therefore, their existing top tooling. 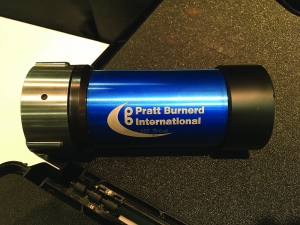 Maintaining a high percentage of a chuck’s jaw force is particularly advantageous when turning thin-wall components. In those applications, an end user reduces the force on a part to prevent its walls from being distorted, Lillibridge noted. If a chuck loses a significant portion of its gripping capability after the clamping force was already reduced, the part might come out of the jaws during machining.

“You could turn the pressure down so you don’t crush the part,” he said about PBA’s chuck, “but still maintain the force with the counterbalance. It’s much safer because of that.”

In addition, the power chuck can perform collet work, Lillibridge said. “With our chuck, you put Warner & Swasey-type collet pads in the master jaws, and you don’t use top jaws.”

To further enhance safety, PBA introduced the PBI GripSafe grip meter. The meter is suitable for measuring the static and dynamic gripping force of any 2- or 3-jaw chuck at up to 6,000 rpm, the company reports.

“You could see how much jaw force you lose as the speed increases,” Lillibridge said, adding that the heavier the jaw, the greater the force loss. “You grip the load cell, and it sends out a Wi-Fi signal. You download the app and check the jaw force on your cellphone.”

Before recommending a quick-change-jaw system—or a quick-change anything, for that matter—Hartung emphasized the importance of understanding a customer’s needs. “Do our customers need quick change or to run more product or do faster changeovers or have more flexibility?” he asked. “That’s the question we need to answer while discussing their process-improvement requirements. Then we apply the product, and quick change is the answer in many situations.”

While machine tool builders have made strides with respect to turning center technology, such as providing mill-turn capability, more axes, quick-change tooling on turrets and enhanced tool magazines, Hartung said one component generally remains a constant. “The same chuck that comes on one of these machines that can do all these crazy and cool things today is no different than the one that came on a 3-axis lathe 30 years ago.” 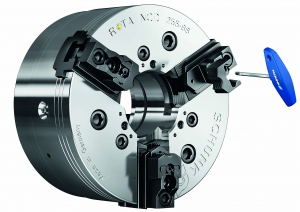 The ROTA quick-change-jaw system from SCHUNK can be combined with multiple top jaws to allow many types of ID and OD clamping. Image courtesy of SCHUNK.

The machine comes with a general-purpose chuck because the builder doesn’t know what the end user’s application is, he explained. “To be honest, it would be better for a lathe to come in like a mill does. What does the mill come in with on the table? Nothing, because they don’t know what the machine is going to do.”

Nonetheless, times are changing, and Hartung said machine builders and dealers are starting to more thoroughly examine the accessory side, such as workholding devices, particularly for high-end, high-performance machines. “If your workholding doesn’t perform like the machine does, you’re really not providing the solution tailored to the customer’s needs.”

Another change he would like to see is for someone to coin a different term for “quick change.” “We’ve used it for so long that it’s almost falling on deaf ears,” Hartung said. “We’re really not paying attention to it. But today, we need to focus on productivity more than ever.”

A change to that entry in machining’s lexicon, however, is unlikely to be quick.

Quick-change-jaw systems aren’t the only option when rapidly switching workholding for turning operations. Hainbuch America Corp., for example, offers a variety of quick-change workholding, including the Today, Tonight, Tomorrow (TTT) and the centroteX systems.

Tom Buraczewski, Midwest regional sales manager for Germantown, Wis.-based Hainbuch America, said the modular TTT system offers adapters for three workholding options: a collet for OD, an ID with an expanding mandrel and a 3-jaw chuck. While the collet chuck remains on the machine, an end user simply plugs one of the adapters into the chuck. 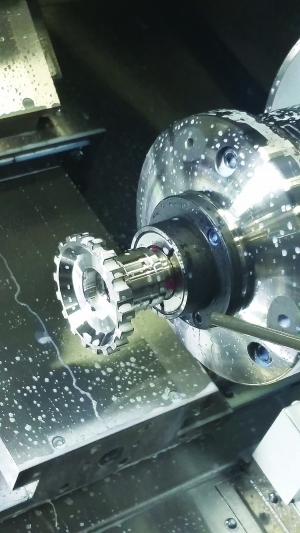 Holding on to an ID with an expanding mandrel is one workholding option for the TTT modular system. Image courtesy of Hainbuch America. 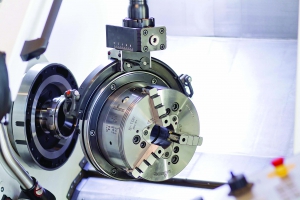 The centroteX quick-change interface allows workholding devices to be mounted on multiple milling and turning machines within a manufacturing plant.  Image courtesy of Hainbuch America.

TTT allows a changeover to be made in about 2 minutes and is also suitable for milling applications, Buraczewski said. “The alternative is pulling the whole chuck off and installing a new one. Conservatively, that would take a half hour.”

He said one customer purchased a new Doosan machine and added the TTT system to machine parts from up to 2½"-dia. (63.5mm) bar stock and castings up to 6" (152.4mm) in diameter on the same spindle. The parts manufacturer is also looking at the modular system to hold parts on an ID with an expanding mandrel.

The centroteX system, Buraczewski added, goes a step further than the modular TTT system. “The centroteX does truly enable you to change to an entirely different workholding system,” he said, adding that the options include a collet chuck; a 3-, 4- or 6-jaw chuck; or even a special fixture for an odd-shaped casting for virtually any make or model of chuck. The workholders can be from other manufacturers besides Hainbuch.

“The system enables you to use the existing workholding already in your facility more effectively and more efficiently,” Buraczewski said.

According to the company, centroteX allows workholding devices to be mounted on multiple milling and turning machines within a manufacturing plant. This arrangement eases parts scheduling because a machine isn’t limited to just holding parts with one type of device, Buraczewski said.

“When a part comes up in the schedule,” he said, “you can run it on any machine because that machine has the flexibility to adapt to that part.”

In addition, the machine operator doesn’t require the extensive amount of training needed to conventionally change from one chuck to another, which might consume 45 minutes or more and require maintenance or skilled trade personnel, according to Buraczewski. Instead, an operator can be quickly and easily trained to make the 5-minute change using one Allen wrench. “We simplify the process,” he said.

As downtime reduction continues to remain a significant goal, manufacturers will continue to gravitate toward workholding systems that speed changeover. “Anything that we can do to shorten the downtime between parts is money in your pocket,” Buraczewski said.