Productive Times: Kick out the jams

SOLUTION: A chip conveyor with a dual-belt conveyor that reduces or eliminates jamming problems.

When it comes to turning the modified 8720 steel needed to produce railroad bearings, Amsted Rail – Brenco Inc. effectively handles the task. However, the manufacturer has struggled to convey the bushy stringers generated by its turning operations.

The bundles of chips consistently jammed the conveyors, said Mark Vieira, machining process engineer for the Petersburg, Va., company. “I would see maintenance people put a pipe wrench on the motor shaft to force the conveyor past the jam. That’s not the best way to clear a jam.”

Partly as a result of that activity, he added, the conveyors were falling apart after a couple of years of around-the-clock operation. 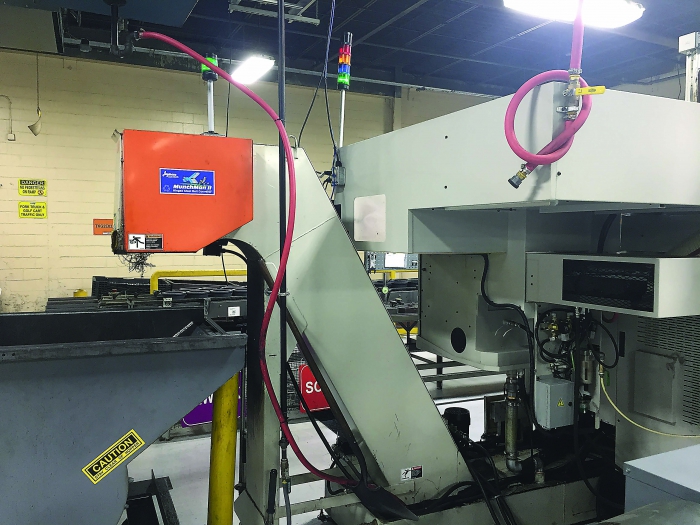 Because the previous conveyors were attached to each machine tool above the coolant tank, a large quantity of chips and debris fell into the approximately 200-gal. (757 L) tanks. The company had to clean the tanks every 3 months, Vieira said. “We would lose 96 hours of production per machine each year to clean our coolant tanks during regular working hours.”

The twin-belt arrangement is at the lower curve and through the incline and chip discharge sections of the conveyor. One belt runs over the top of the other in the opposite direction to pull the chips, Vieira explained. The design flattens the stringers to help avoid conveyor jams and provide more capacity in the chip hoppers. (A video is available at www.tinyurl/k6ncy5c.)

“After I saw the Jorgensen conveyor, and that it was designed for the type of material we run, I didn’t consider going with any other conveyor,” Vieira said.

Jorgensen engineers visited Amsted Rail – Brenco to measure the machines and coolant tanks. They contacted the machine tool builder to help accurately fit 11 conveyors to the machines and provided drawings for customer approval prior to installation, Vieira said. “It took about a year until everything was done.” 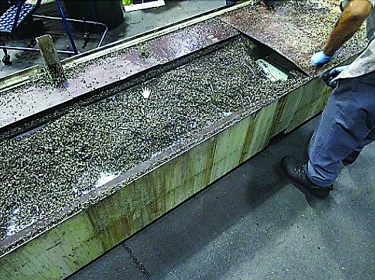 The Jorgensen chip conveyors also came equipped with a Jam Manager, or UVS-EcoLogic, control. Suppose something falls into the conveyor or the quantity of the bushy chips jams the conveyor. With the control, the conveyor will automatically back up and move forward three times to try and clear the jam before stopping, Vieira said. If needed, the jam can then be cleared manually.

“This saves our conveyors from being damaged because of forcing the conveyor to pass the jam through,” Vieira said. “This improvement, along with regular maintenance, should afford us a much longer chip-conveyor life. Our old chip conveyors lasted 3 years.”

In addition, the control allows the conveyors to run intermittently. “I have them set to run a minute forward, then stop for a minute and a half to drain coolant. We save a little bit on coolant and carry out,” Vieira said.

Instead of cleaning the coolant tanks every 3 months, the Jorgensen conveyors enable the railroad bearing manufacturer to clean the tanks once a year during normally scheduled shutdown weeks, Vieira said.

“We don’t lose any production time for coolant tank cleaning,” he said, adding that 24/7 production has slowed to two 10-hour shifts, 4-to-5 days a week, with some Saturday production. “Only having to clean the tanks once a year means we also reduced our coolant tank hazardous waste removal by 75 percent.”

SOLUTION: A chip conveyor with a dual-belt conveyor that reduces or eliminates jamming problems.