Productive Times: From dovetails to dimples

CHALLENGE: Eliminate the time spent machining dovetail cutouts and holes in a workpiece so it could be held in a dovetail-type vise for machining.

SOLUTION: A stamping unit that creates dimples in a workpiece for holding it in a self-centering vise, referred to as form-closure technology.

A dovetail-style vise can be an effective method for holding a workpiece for machining. “A fairly minimal amount of material is required to hold onto the part,” said Kevin Kostecki, manufacturing engineer for Manes Machine & Engineering Co., about that type of fixture. “It’s a proven process and gives you a good hold.”

The Fort Collins, Colo., aerospace parts manufacturer has had ample experience with dovetail vises. It had been producing vises for in-house use but then switched to a commercially available offering.

When producing about 240 titanium 6Al4V parts per month, Manes initially cut the raw workpiece material into two parts with a waterjet. Before the company could start machining the actual part features, however, it had to perform three operations for a workpiece to be held in a dovetail vise: Mill the opposite side of the waterjet-cut side flat, machine eight dovetail cutouts and drill three holes. Kostecki said those operations took 45 minutes and consumed $15 in tool costs per part. Additionally, the workpiece material had to be large enough to include the roughly 1/8" (3.175mm) needed for the machined features. 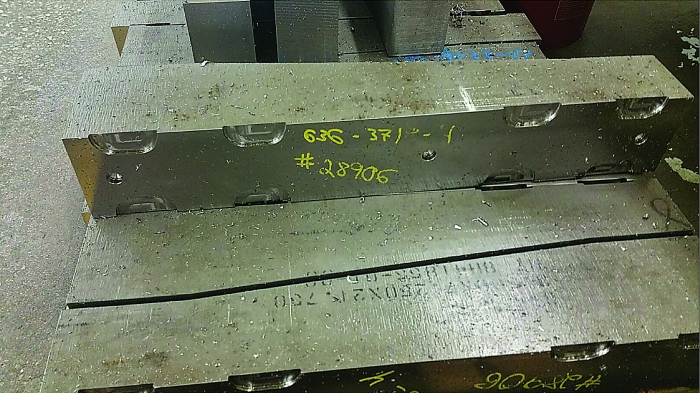 A titanium workpiece is loaded into a Makro Grip clamping system from Lang Technovation.  Image courtesy of Manes Machine & Engineering.

Kostecki assumed there had to be a more efficient workholding method. He conducted some research and learned about the Makro Grip clamping system from Lang Technovation Co., Hartland, Wis. He then visited the company’s booth at a trade show and received a hands-on demonstration. Instead of machining features into a workpiece to hold it, Kostecki said, the Lang system incorporates a unit that stamps indentations, or dimples, into the workpiece about 3mm (0.118") from the bottom of the part. The system’s vises then clamp the indentations to firmly hold the workpiece for machining.

“We are not creating any features that we have to cut away,” he said. “We are just putting tiny marks on the side of the material, so we can still produce a part between where those dimples are located.”

The stamping unit, which has a 300:1 hydraulic multiplier, runs off of shop air. An operator adjusts the pressure depending on material hardness. The stamping unit Manes selected is suitable for material up to 45 HRC, Kostecki added. The titanium that Manes machines averages about 36 HRC, which requires a pressure of about 4.75 bar (69 psi) to indent. The process for preparing the raw material for the first CNC machining operation is less than 30 seconds when the material has fairly parallel sides and 90° corners, he said.

Kostecki calculated that Manes saves more than $100 per part in time, material and tools.

The quick-change aspect of the Lang workholding system also is beneficial. “We can simply install the Quick Point studs into our existing fixtures. Then all we need to do is remove the vises—our other fixtures can be loaded directly onto the system’s risers and Quick Point plates,” Kostecki said. This eliminates the need to relocate fixtures each time Manes runs parts and changes fixtures.

CHALLENGE: Eliminate the time spent machining dovetail cutouts and holes in a workpiece so it could be held in a dovetail-type vise for machining.

SOLUTION: A stamping unit that creates dimples in a workpiece for holding it in a self-centering vise, referred to as form-closure technology.