The following scenario might sound familiar: The quality-assurance technician is out sick. The backlog for the coordinate measuring machine is five jobs deep. A machinists must check a hole position on a rush job.

These common occurrences can cause machine downtime, worker frustration, lost productivity and bad parts. Some parts manufacturers attempt to solve these problems by placing a conventional CMM in the production area, but this consumes valuable floor space and often requires plumbing for compressed air, a special foundation and significant operator training. What’s more, most CMMs are not suitable for the temperature swings and less-than-pristine air quality that are typical in many production environments.

There’s also the annual licensing fees associated with most CMM software, noted Nathan Blair, plant manager for Greenlee Textron Inc., Genoa, Ill. In the facility’s 63,000-sq.-ft. manufacturing space, the company machines and assembles a vast array of steel and aluminum products for the electrical, and other, industries. These include punches, dies, electric and hydraulic benders, cable pullers, hydraulic impact wrenches and drills, chain saws and pruners. “I think we have somewhere in the neighborhood of 700 products,” he said. 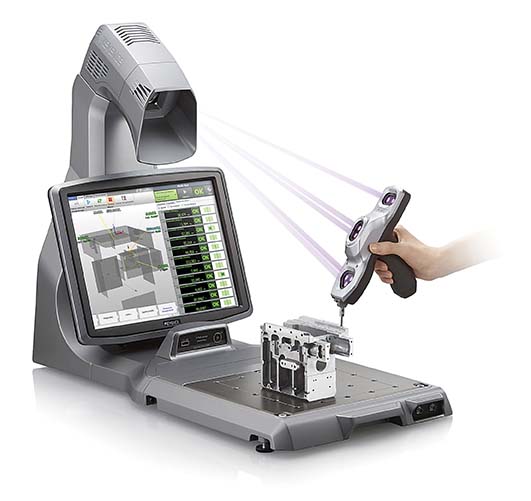 The XM 3D system from Keyence measures parts on the shop floor
using a hand-held probe. Image courtesy of Keyence.

With that many products and about 80 employees, up to half of whom are machinists, the company was experiencing capacity constraints on its two large, production CMMs. “When you are constantly launching products, you just hit bottlenecks,” Blair said, “where you have three new programs and a prove-out going on at once, for instance, and then you have people waiting at a CMM.”

He added that running a CMM program can consume an hour, such as when tolerances are in the “tenths” or when part length is a couple feet or more.

Aggravating the situation was the facility’s quest to increase automation and connectivity via the Industrial Internet of Things. According to Blair, that increases the emphasis on gathering part-quality data and the frequency of part measurements.

Greenlee Textron searched for a solution and selected the XM 3D measurement system from Keyence Corp. of America, Itasca, Ill., based on the system’s ability to be moved from one machine to another, be used in an industrial environment and enhance shop connectivity, Blair explained.

“The XM’s capabilities are an important part of Greenlee’s move into the digital manufacturing era,” concurred shop supervisor Derek Ernest. “Not only is it a key player in managing part quality, but the XM also makes statistical process control easier with its Cp and Cpk tracking capabilities. This helps to put our operators at ease with the whole idea of SPC, which has been a very manual, painstaking ordeal that can now be completed behind the scenes automatically.”

Using a high-resolution camera and a hand-held probe that eliminates any horizontal- or vertical-movement restrictions, Keyence states that the CMM guides the operator through a series of steps: Touch the workpiece with the stylus, select the measurement parameters and follow the on-screen guide to measure points, surfaces, circles, ellipses and various 3D shapes, including free-form surfaces.

The system also records the positions obtained while measuring a part, which reportedly simplifies the creation of work instructions. “It generates a step-by-step procedure for you to follow that’s all based on pictures,” Blair said, adding that each picture shows the user where to measure when running a program. “It is as easy as anything I’ve ever used to measure a standard part.”

Greenlee Textron mounted its XM on a cart, which enables the system to be rolled anywhere in the shop where a setup is taking place and begin part measurement as soonzas a part is removed from the machine. “This is a big improvement over our past program prove-out experiences, in which we would need to break into the CMM schedule of normal production parts in order to perform first-article inspection and complete the machine setup—all while the CNC machine sat idle, waiting for the inspection report so the operator could make the necessary offset modifications,” Blair said.

Once an XM program is created, it only takes an operator about 2 minutes to inspect most parts, he noted. With the addition of a table around the system’s platform, Greenlee can measure parts 2' (0.61m) long.

“Installation was quick and pain-free, and the training was very helpful and straightforward,” Ernest said, adding that Keyence helped with the transition from the training material to programming Greenlee’s production parts.

To become proficient at using the system, Blair said an operator needs to train 3 or 4 workdays. Although Greenlee still must use a conventional CMM to generate the final “green sheet” on a part during prove-out because it’s more accurate, the hand-held measurement system will further relieve capacity constraints on the company’s stationary CMMs as more machinists receive training, he added. “Then they can do some quick checks on their part setups that don’t require the same precision as the CMM.”