In traditional setup processes, shop personnel take critical tool measurements in a machine tool before a job begins. While the machine is being used for tool setup, of course it isn’t being used for cutting, so shops that opt for this old-style approach also are getting increased machine downtime as part of the package.

Thus comes the appeal of tool presetters, devices that allow users to take tool measurements necessary for the next job outside the machine while it’s still running the current job. Besides increasing spindle uptime, tool presetters can cut down on costly operator errors, lengthen tool life and help pave the way for more automation of machining processes.

The basic process of readying a tool for a job can include assembling the tool; taking length and diameter measurements in the machine using a gauge, probe or laser; and then entering the proper values into the machine. Not including assembly, a general rule in the industry is that the setup process typically takes three to five minutes, said Robert Bied, vice president of product management at Haimer USA LLC, a presetter supplier in Villa Park, Illinois.

“If I use that three to five minutes per tool and I have 20 tools in my magazine for a new job, that’s 60 to 100 minutes” of machine downtime for setup, he said. “But if I do that process offline in a tool presetter, downtime on my machine tool is just the amount of time it takes the operator to plug the tools into the magazine or carousel.”

The impact of this reduction on machine downtime can be huge. If a tool presetter can increase a shop’s spindle utilization by 40%, for example, the result could be a doubling of the shop’s production capability without a major capital investment, said Michael Colyer, key accounts manager at Zoller Inc. in Ann Arbor, Michigan.

He pointed out that cost analyses done by Zoller for most of its presetters at shops that have five or more machine tools usually show a return on investment in less than half a year.

“With an ROI of less than six months and the ability to significantly increase your business and the amount of throughput, in my mind (using a presetter) is a no-brainer,” Colyer said.

Tool presetters are suitable for all machining applications but excel in environments where tool magazine changeouts are frequent, said Andrew Esposito, vice president of sales at Koma Precision Inc., a presetter supplier in East Windsor, Connecticut.

“The more tools that get swapped out, the more of an advantage a tool presetter is,” he said.

Tool presetters come in a variety of types with a wide range of features and price points. At one end are basic, lower-cost manual presetters while at the other are presetters equipped for fully automated toolrooms.

In a simple process involving a presetter, Bied explained, shop personnel measure each tool for a particular job and print a label with the information that’s affixed to the tool. Then the measured tools are placed on a cart and wheeled over to a machine tool, where an operator keys offset data for each tool into the machine control and places the tools in the machine’s magazine.

In a more automated process, he said tool labels can be printed with a QR code, as well as human-readable information. He said many machine tool builders now equip machine controls with scanners that can read QR codes on the labels so tool data can be loaded automatically into the machine register.

Bied said another option is to have a presetter write the measurement data for each tool to a radio frequency identification chip on a toolholder. When the toolholder gets to the machine, it reads the data in the RFID chips and downloads that into the machine control.

Yet another automation option is to connect a presetter and machine tools to the same network so tool data files can be sent directly to machine controls.

“More shops are moving to automated database management with tooling offsets stored on servers and sent directly to the machine,” Esposito said.

The main goal of automating the movement of data is to prevent tooling mistakes, such as typing wrong information into a CNC.

In addition to eliminating operator error when entering tooling data into a machine control, presetter choices that are more automated reduce what Colyer calls “user dependency” in the measurement process.

“With a manual presetter, you’re moving the optics carrier into place and rotating the spindle by hand,” he said. “When you’re dealing with a system that has accuracies in the microns, how fast a tool is spun in the spindle by hand can have some effect on the camera and the glass scales that collect the
measurements.”

With a fully automated presetter, however, “you gain user independence because every guy in your shop can measure the same tool and get the exact same result with the automation and software doing all the work for you,” Colyer explained. “You just put the tool into the spindle and hit a ‘measure’ button, and the machine will go through the cycles and measure that tool.”

Besides providing more consistent and accurate results, he pointed out that automated tool presetters are a good fit at shops that are having a hard time finding highly qualified people — a common problem in the machining industry today.

“With Zoller presetters down to our semi-automatic (models), you don’t have to have a master machinist to set a tool,” Colyer said. “You can do it with an apprentice because our machines are made to operate without that user dependence.”

He said Zoller’s presetters can measure just about any tool parameter that a shop wishes to measure, including length, diameter, angularity and the nose radius of inserts, as well as rotational tool characteristics, such as runout. Accurate runout measurements are particularly helpful to shops that use cutter compensation to adjust processes for potential runout, he said.

Rather than guessing at it, “now they know exactly what the runout of the tool is and what diameter a tool is going to cut,” Colyer said. “This is a huge benefit, especially if you’re machining precision-type parts.”

He said since Zoller’s tool presetters accurately measure rotational variables like runout, the presetters allow operators and toolcrib attendants to spot possible trouble before tools are loaded into a machine. This includes problems that can reduce tool life, such as tools that are set incorrectly in holders, and issues that can cause costly in-process tool breakage. Moreover, he noted that simply presetting tools within their manufacturing standards can boost tool life by up to 20%.

Recent developments in tool presetting include Zoller’s introduction of pilot 4.0, which Colyer describes as user-friendly software that enables Zoller presetters to work with third-party systems.

“If our customers are running five different machines from five different companies, (pilot 4.0) lets them interface with all of those machines,” he said. “It’s also fully networkable, so you can put our presetter on your network and share tool data with other presetters in your shop and also integrate with your CAM system.”

Colyer reports that a new focus for Zoller is moving toward systems that fit into fully automated and integrated toolrooms. In such toolrooms, he explained, robots and Zoller’s systems will work together without human involvement to pick and set up all the tooling required for a particular job and then deliver it to the proper machine.

Bied said Haimer also has supplied presetting equipment for robotically automated tool assembly cells in which everything is done without operator involvement. The company introduced presetter technology suitable for such cells at the EMO trade show this year.

While tool presetting systems for highly automated processes can cost $50,000 and up, he said lower-end manual presetters might set back shops only about $15,000. Still, he said some shops with machine tools equipped with tool presetting features balk at spending anything for a separate presetting device.

“A lot of people say, ‘My machine came with a laser or a tool post, so I can preset tools in the machine. So why do I need a tool presetter?’” Bied said.

These people, however, fail to understand that the main advantage of a separate tool presetter is that it’s not part of their machine tool.

Bied said, “We tell them, ‘Yes, you can preset your tools with your laser or your touch post. But it’s unproductive time in the machining center, and there’s a cost to that.’” 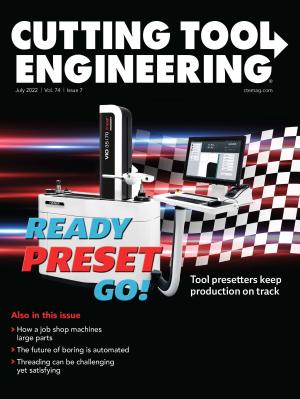