Poll offers snapshot of what matters to CNC users

He also produces an electronic newsletter for 100,000 subscribers, who include machinists at OEMs and job shops, educators and hobbyists. In September, Warfield polled his readers on which CNCs they use and what they like and dislike about them. (The poll results are at tiny url.com/CNC-survey1.)

When asked which CNC they use, the 500-plus poll respondents mentioned more than 50 brands. When asked what they like and dislike about their current controls, however, there was a surprisingly large confluence of opinions. 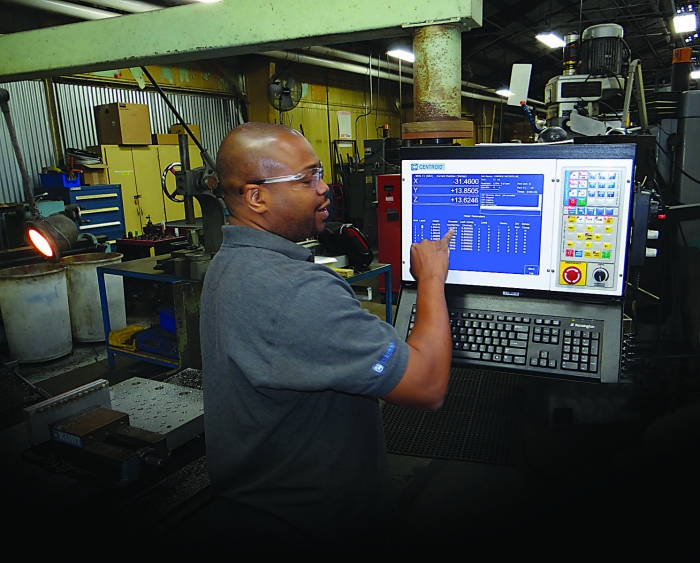 A machinist checks parameters on a Centroid control. Image courtesy of Centroid.

Even though it was a single, informal poll, the results offer a snapshot of what matters to actual CNC users. Three control makers (all of which admittedly had notable rankings in the poll) spoke to CTE about how they address concerns that the poll revealed.

“Ease of use” was the quality most cited in answer to the question of what users most like about their CNC—and the most cited by users regarding what they find unsatisfactory about their current control.

Paul Gray is the manager of path planning, front-end design and R&D for Hurco North America, Indianapolis. Hurco’s CNC ranked highest in satisfaction in the CNC Cookbook poll, and Gray thinks the company’s focus on ease of use could account for that.

Gray cited as an example the control’s ability to import solid models. “Our customers can now load solid-model CAD files directly into our WinMax control and simply select features to program conversational data blocks instead of having to type in the geometries from prints,” he said. 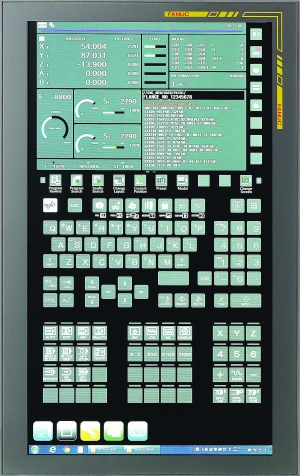 The FANUC iHMI display is designed for intuitive use, much like a smartphone’s. Image courtesy of FANUC America.

Gray added that customer expectations for the human-machine interface (HMI) are changing. “Our 3D graphical simulation and our new CAD interface are just the beginning of an evolution toward further advancements in our control,” he said. “Naturally, the challenge for Hurco is to further improve the intuitive nature of our control interface while ensuring that we do not alienate present users.”

For Paul Webster, CNC engineering manager for FANUC America Corp., Hoffman Estates, Ill., guaranteeing that the control is easy to use calls for a design that looks forward without ignoring the past—a tough balancing act for the company whose G code has been the ISO standard for 40 years. FANUC was ranked most used in the poll.

“The baseline of our ease of use is making sure that there is backward compatibility,” Webster said. “If a shop has 10 machines, each a different age, the same operators should be able to run all of those machines.” With a FANUC control, you can “train a new operator on one machine and he’ll be able to operate all of the equipment.”

But focusing primarily on backward compatibility wouldn’t bode well for modernization, Webster acknowledged. “In the last few years, FANUC has been adding features to the HMI to make it easier for  younger generations to operate.”

The company’s iHMI interface is designed to be an intuitive, easy-to-use touch screen, with a launcher page that “looks like what you would have on a smartphone, where you can hit the icons and launch different applications,” Webster said. Through it, the user can access features such as full 3D simulation with back plot and easier conversational-type features. “For example, you could [program] a pocket without using full conversational [mode],” he said. “You just type in the features you want, and it will generate the G-code program for you.”

The interface is intuitive enough that if end users are comfortable with an older interface, they don’t need retraining, according to Webster. But if they prefer, an icon on the launcher screen lets them work instead with the interface screens of the older controls.

Centroid, Howard, Pa., has made controls since 1981, so backward compatibility is an important concern, according to its vice president of product development and marketing, Keith McCulloch.

“A lot of major control makers have controls that have a cycle life of about 7 years—and if your control is older than that, you’re done,” he said. “You can’t get parts for it; the software is dead. We’re the opposite of that.”

McCulloch said the Centroid control has been “massaged and tweaked” over the years in a way that preserves what was an intuitive system. “Someone who used our control in 1991 would actually feel very comfortable walking right up to a new Centroid,” he said, “because he’ll see a very similar menu-driven part setup, tool library and conversational programming.”

The company’s control ranked fifth in the list of most used controls in the poll, a notable leap from 14th in the 2016 poll. (McCulloch explains how Centroid, “the Rodney Dangerfield of controls,” made this leap in a feature on CTE’s website: Go to tinyurl.com/CTE-Centroid.)

PC or Not PC

FANUC controls are on about 60 percent of all CNC machine tools sold in the U.S., according to Webster, and it is the machine tool builders who decide which of the many options FANUC offers to make available on a given model.

“A lot of ease of use comes down to implementation [of the FANUC control] by the machine tool builders themselves,” he said. “As a control manufacturer, we don’t necessarily know how their toolchanger or their coolant pump works. We offer the provisions for them to be able to make it work. We’ve got graphics tools that make it easy for the builder to make these customizations.” (Webster explains in a CTE web feature how if your FANUC machine lacks features because of the machine tool builder’s choice of control options, it’s probably not too late to have them added. Go to tinyurl.com/CTE-FANUCoptions.) 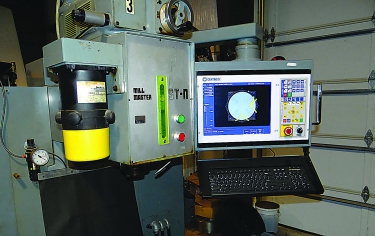 FANUC controls differ from Hurco’s and Centroid’s in that they are not PC-based. Webster believes this is a strength.

“We’re the equivalent of Apple versus Microsoft. Ours is a closed system,” he said. “We make the hardware. We make the software. It all works together. And the reasons for this approach are reliability and performance. Because if we control everything, we know it works.”

FANUC controls are made to run 20 to 30 years, 24/7, in a production environment, he continued. “They are not for the tinkerer. They’ve got to be pretty close to bulletproof.” Depending on the far-from-perfect Microsoft Windows offerings is not a good strategy for maintaining performance and reliability, Webster said.

Hurco’s Gray and Centroid’s McCulloch see matters differently. For them, the evolving capabilities of PC-based software, such as Windows, allow controls to more quickly and easily improve as well.

“Since the Hurco WinMax control is PC-based and runs Windows-embedded operating systems, our customers are protected from technology obsolescence,” Gray said. “We can provide control software updates with new features in the same way you update your Windows PC.” With the advent of new technology, “the capabilities of the control are able to grow to meet the users’ needs over time.”

A PC-based system similarly allows the company to be able to more easily upgrade control hardware in order to provide faster CPUs (central processing units) and more powerful graphics when the need arises. “Few CNC companies can provide this level of flexibility,” he said.

In McCulloch’s view, the argument against being Windows-based is often grounded in a misperception about how the Windows software is implemented. Potential customers imagine the disasters that could come from, say, Windows deciding to stop working so an update can be installed in the middle of a delicate machining task.

“That worry is based on Windows as they see it on their PCs at home,” McCulloch said. “We don’t just install the same Windows you get on a computer at Best Buy. We go in and configure Windows—currently Windows 10—for control use.”

All the irrelevant or possibly disruptive features are turned off, he said. And by using PC-based software and hardware, innovations become available at a lower cost.

“If you have Windows 10 on a PC, you can buy a compatible webcam for $29 and a piece of software for maybe $6 that will text you when the camera sees that an operation is finished,” McCulloch said. “A developer of proprietary controls might have to invest thousands of dollars to come up with the software that’s able to do that.”

Making controls as simple as possible to use is being pushed by the marketplace. One reason is the much-discussed skills gap. As a new generation of machine operators replaces retiring baby boomers, the new employees bring less knowledge, training and experience to the workplace. And there aren’t enough of them, as CNC machine operation positions are going unfilled. Therefore, control makers are hearing loud and clear that CNC machines must be easy to operate so that a person with relatively little training can run them.

But there is another impetus, according to CNC Cookbook’s Warfield. The issue is not only who is manning the machines, but who is buying them and why.

“The controls we have today are fine for well-trained operators and machinists,” he said. “But I am seeing more and more activity in the prototyping market. Companies are discovering that equipping their engineering and design teams with CNC machines so they can quickly iterate a real design and hold the product in their hands is extremely beneficial.”

The costs of such machines are coming down, and their use for prototyping is spreading, War-field noted. But controls are largely still being made for the shop-floor operator whose only job is to run a CNC machine. And that’s shortsighted, according to Warfield. “What the growth of the prototyping market means is that a growing crop of people whose primary job isn’t to run CNC machines need to nonetheless be able to run the machines.”

He sees a parallel with the development of the PC as it went from the DOS code line to the Apple graphical user interface and on up to the ease of use of tablets and smartphones.

When the PC was being developed, there were naysayers, Warfield said. “Back in the day, people really thought nobody important would use a PC—because nobody important typed. They let their secretaries do it. Those people were in for a surprise when demand for the PC exploded as it became used in unexpected ways. It’s not a perfect analogy, but I see parallels for the CNC world,” he said.

As CNC machines continue to migrate from shop floors to workshops and labs, control makers had better be ready.