Good machining starts with parts that are placed accurately and oriented the same way each time. Machine loading can be done by an operator, but it is a dull, repetitive job and normally not the best way to utilize valuable manpower on a shop floor.

So the company has introduced a pick-and-place kit to automate the job without the major integration and programming efforts usually required to install and set up an automated bin-picking system. The kit, which is called ActiNav, includes a 3D laser scanner camera meant to be located in a fixed position above a bin; a Universal Robots USA collaborative robot, or cobot; and a special motion control module. In addition to the items in the kit, users need a mounting frame for the components and end-of-arm tooling that allows the robot to pick up parts. The end effector can be a gripper or vacuum system.

The task for the robot arm is to pick a part out of a bin, safely move the part to a machine and then properly load the part. Because the locations and orientations of all parts in the bin are different, the path that each part travels to be loaded into the machine is different as well. 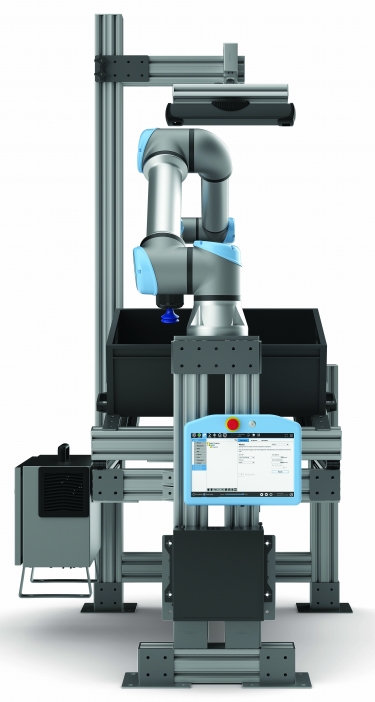 “With other systems, all those different path configurations have to be taught,” Campbell said. “This requires days of programming and hundreds of lines of code.”

With ActiNav, however, path planning for each part is automated thanks to the Autonomous Motion Module, a separate controller that interfaces with the cobot controller. To determine part orientation, the module gets information from an image capture of every part to be picked up. The module plans the optimal paths for placement of parts in the machine and controls the cobot moving the parts. He said no other pick-and-place system automatically plans loading paths and then moves parts accordingly, which is why ActiNav is billed as the first autonomous bin-picking kit for machine-tending applications.

Universal Robots USA also touts the fact that ActiNav requires no machine vision or robotic programming expertise. Setup is a wizard-guided process presented to a user by the cobot’s teach pendant, which is a hand-held unit with a screen that interfaces with the control system.

The process relies on both “teach by demonstration” and “scan to teach” procedures. Employing the former, a user touches objects in an environment with the cobot arm so the system will know their positions to avoid collisions. A user also touches the top, bottom and sides of the bin with the cobot arm to teach the system the bin shape.

After importing a 3D CAD model of a part into the system, a user attaches one of the parts to the end effector in the correct orientation. The part then is positioned under the camera, and the user presses “scan to teach” to take a picture that captures the relationship between the part and the end effector.

To train the system for part placement, a user simply moves a part and the arm to the place location. The system will remember that location, as well as the part orientation.

The wizard-guided process enables in-house personnel to finish setup work in just six steps. Initial setup can be completed in a couple of hours, according to Universal Robots USA. What’s more, the company reports that programming is reduced from the hundreds of lines required by conventional systems to a dozen lines or less.

“In a deep bin, there are so many possible part orientations and locations that it’s much more difficult to program all the different path scenarios,” Campbell said. “But because ActiNav generates its own path for final placement, it can operate quite well in deeper bins.”

On the downside, ActiNav may have trouble keeping up when machining cycle times are very short. Campbell said cycle times of less than 10 seconds could pose a problem for the system.

Although ActiNav can be beneficial for high-volume production of a single part, he said the kit is particularly well suited for small job shops that do high-mix, low-volume work.

These shops may want to automate machine loading, but “they just can’t afford the level of programming and customization that would normally be required every time they want to change a part,” Campbell said. “So that’s where rapid setup and programming really make a big difference.”

For more information about ActiNav, view a video presentation at www.ctemag.com by entering this URL on your web browser: cteplus.delivr.com/2ayz2 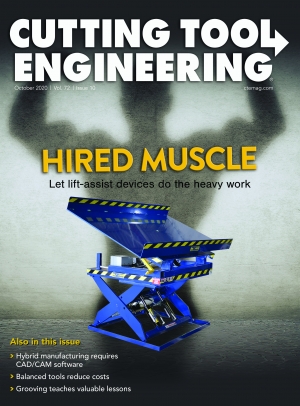