Numerous toolmakers provide free programs that will automatically generate G code for a specific thread milling application. The programs vary in sophistication and in whether they are online-only or downloadable, but all are useful tools. Among the suppliers of these apps are Scientific Cutting Tools Inc., Simi Valley, Calif.; Guhring Inc., Brookfield, Wis.; and Kennametal Inc., Pittsburgh.

Allied Machine & Engineering Corp., Dover, Ohio, which recently released Insta-Code, is another. It gives users the ability to select the thread form, the thread pitch and information about the application and then creates the necessary program. If the thread mill item number is known, the software can create a program instantly. Insta-Code can also suggest the best thread mill for an application, as well as provide internal and external thread programs for multiple machine controller types, including Mazatrol, Siemens, Heidenhain, FANUC, as well as ISO G Code. 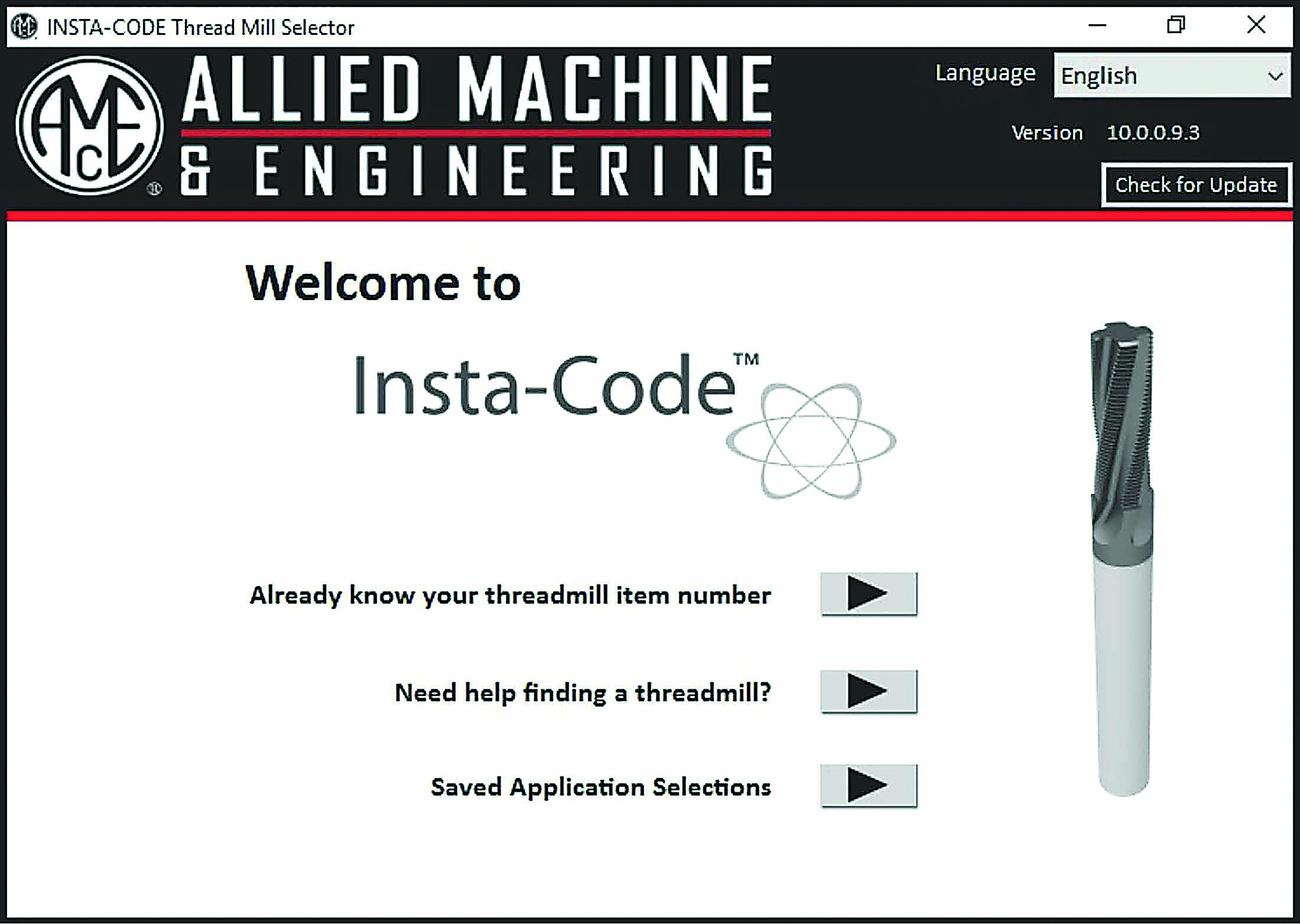 Jamie Rosenberger, Allied’s product manager for thread mills, helped develop Insta-Code. “After 15 years in the industry and trying numerous thread milling apps, I had the opportunity to include features I’d wished they had.”

For example, while some program generators are online-only, “I wanted to make sure that where you need to run a thread mill is where you can create the thread mill program,” Rosenberger said. “Online-only versions are easy to keep up-to-date, but often on the shop floor there’s no internet access.” For this reason, Insta-Code can be downloaded to a flash drive and installed on a machine’s offline computer.

OSG USA Inc., Irving, Texas, also has a downloadable version of a thread mill code-generating program, and, like Allied’s program, it’s available in numerous languages. ThreadPro is an NC-code generator for use with OSG’s Planet Cutter thread mills.

A customer’s need for such a program is easily understood, especially when working with hardened steel “or when you are making a part that costs, say, $10,000 and the last operation is threading a couple of holes,” said Balbir “Bill” Minhas, OSG senior application engineer. “You don’t want to scrap that part.”

Thread mill program-generating software is not new, according to Minhas. OSG has offered the service “as long as I can remember,” he said, adding that it predates his joining the company more than 5 years ago. ThreadPro, which was released about a year ago, replaces earlier software versions and has capabilities beyond generating G Code, including supplying the feeds and speeds appropriate to the material being cut.

ThreadPro is also much easier to use than its predecessor, Minhas said. “You just fill in the blanks” by plugging in the numbers regarding a specific application, “and it makes the program.”