Moving ahead with multitaskers

Ask any machine shop owner, production supervisor or human resources manager to name his or her biggest challenge, and you’re likely to hear the same answer: “We can’t find qualified people to set up and program our CNC equipment.” Isn’t it ironic then that so many manufacturing companies are turning to machine tools that are more complex rather than less—equipment that requires greater skills to operate and makes finding a machinist able to handle it even more difficult?

“The elephant on every shop floor is the fact that the baby boomers are getting older and there aren’t enough people entering the trades to replace them,” said Carl Barthelson, regional sales manager at Doosan Machine Tools America, Pine Brook, New Jersey. “A case in point is the largest jet engine manufacturer in North America. The company is experiencing its largest jet engine backlog ever, but 30 percent of its workers will reach retirement age within 5 years. Now what?”

Companies have two ways to combat this problem, he said. Businesses can attempt to poach employees from competitors, a move that might be good for machinists’ wages but bad for company profits. Or organizations can automate their processes. He said the best way to automate is with a multitask machine tool. Because multitaskers reduce the number of machining steps—often completing workpieces in a single setup—shops have less need for fixturing, decreased work in process and improved part quality.

In that regard, it appears that the most complex machine tools found on any shop floor make everything about manufacturing life simpler.

These expensive machine tools aren’t for only large manufacturers. Barthelson cited a five-person machine shop in western Pennsylvania whose owners went out on a financial limb several years ago by investing in a $400,000 mill/turn center. Today, the machine is at full capacity and the shop is considering a second such multitasker.

“When they were just a typical job shop filled with 2-axis lathes and 3-axis machining centers, they had to bid everything at $50 an hour,” he said. “Because they’re able to solicit more difficult work and parts with tighter tolerances and machine those parts in less time, they’re now quoting at three times that rate.”

Success in the machining world is no longer about keeping up with the Joneses—it’s about blowing their doors off. Perhaps one way to do this is to adopt and invest in the most advanced manufacturing technologies available, multitaskers among them. 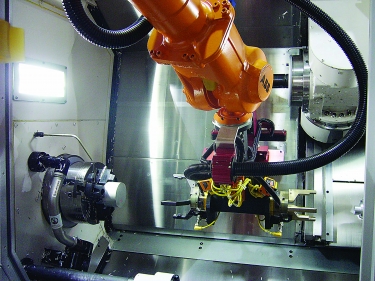 The industry is listening. Anyone who attended the International Manufacturing Technology Show in September can attest that the number and variety of multitask machine tools is staggering:

Then there was the automation. Tim Thiessen, vice president of sales and marketing at Okuma, said robots are reaching far beyond their familiar role of part loading and unloading. They can handle part inspection, deburring and changing tools, greatly expanding the capabilities of machines that were already quite capable.

“There’s definitely a strong push toward all forms of automation,” he said. “Much of that is driven by a surge of reshoring to the United States, coupled with the fact that it’s very difficult to find machinists. This means you need robots able to perform tasks once reserved for humans, as well as machines that can do more with less operator intervention.”

One example of this shift is a robot able to change Capto-style turret tooling or load and unload toolholders that are too long or heavy for a multitasker’s automatic toolchanger, expanding the machine’s lights-out capabilities. The same robot might be called upon to place finished workpieces on a nearby coordinate measuring machine, after which the machine control can decide whether to perform a tool offset or call up a replacement one. 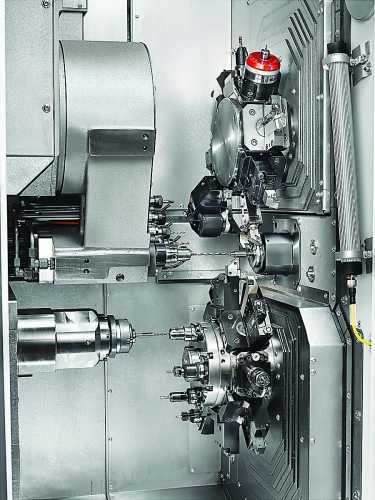 This twin-spindle, twin-turret machine from INDEX is just one of the dozens of available multitask configurations. Image courtesy of INDEX

Asking robots to go above and beyond parts loading can present challenges. Handling complex, oftentimes very expensive finished workpieces requires a careful, accurate grip, far more so than when sticking a raw material blank into an 8" chuck. Because a robot is now being asked to manipulate toolholders, as well as workpieces, it needs an automated way to change grippers. And because multitaskers often contain multiple turrets and spindles—never mind a bigger footprint—a robot must have the reach and flexibility to address larger work areas than in the past.

Thiessen recommended that shops think carefully about their future needs before investing in any machine tool technology. “There are way too many people who take their first step into multitasking with a machine that has a small tool capacity or a limited set of options,” he said. “They quickly discover the many benefits of multitasking and then kick themselves for not buying a more capable machine.”

Tyler Economan, customer support and operations manager at INDEX, agreed that robots are a great addition to any multitask machine. “Everyone knows that there’s a skilled labor shortage, one that most predict we’ll be dealing with for the foreseeable future,” he said. “This makes it especially important to have machines that can do more with less—less space, less people, less overhead. Multitaskers and multispindle machines accomplish this. By adding a robot to handle the menial tasks like cleaning parts or loading them into a measurement fixture, you’re increasing the efficiency and flexibility of what was already a very capable machine tool.” 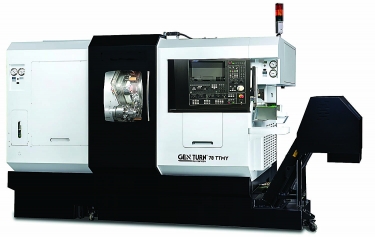 INDEX hopes to make organizing a little easier with iXworld, a web-based portal to give customers easy access to everything they need to know about their machine tools. An extension of the company’s “i4.0 ready” iXpanel operating system, iXworld allows its customers to order parts, request service, observe statistics and provide online feedback about machine performance.

The online portal “gives customers the information they need to run their business in a better way,” Economan said. “It also provides a basic platform for potential future services. For instance, we’re doing more with smart glasses and augmented reality, a technology that will make it easier for us to support customers remotely with maintenance or setup tasks. We recognize that, as Industry 4.0 grows, there may be other applications we can capitalize on to provide better knowledge about our machine tools and new ways to make them even more profitable.” 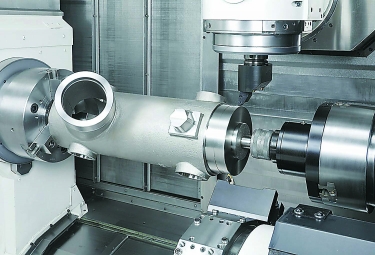 The lower turret is often used for simultaneous machining, as in this example, but can also be used as a steady rest to
support long workpieces.  Image courtesy of Okuma America

“One of the challenges everyone faces is that, by the time you add all the different axes and features needed in a multitasking machine, the control costs can become quite high,” Singh said. “Mitsubishi has recognized this, which is why we’ve been able to bundle their most powerful control with a 3-year bumper-to-bumper warranty.”

Another obstacle is training. Singh said the initial response by many machine operators facing a machine tool with seven or more simultaneous axes is a sense of horror.

“They take one look and say, ‘You really expect me to run that thing?’” he said. “That’s why it’s very important for shops who are just starting out to find a machine tool supplier that can support them for the long haul and is willing to work with them until they’re 100 percent comfortable.”

Singh noted that if a customer needs additional training later, it’s free at Ganesh’s Chatsworth facility for the life of the machine.

Making customers as comfortable with multitaskers as they are with basic 2-axis lathes is not as difficult as it might seem, Singh explained. “It’s really not that different than what they’ve been doing. You set up the tools, you program the left side of the part, the right side of the part, and then sync the two together. Once one of our application engineers walks someone through it a couple times, they’re sold. They see how much the cost of production goes down with multitasking machines and how much more money there is in their pockets at the end of the day. It’s not long before they’re thinking about a second or third machine.”