Modular fixturing at its best offers the stability and accuracy of dedicated workholding with the flexibility to be reconfigured quickly for a variety of parts. The design and building of a dedicated fixture for a specific part or family of parts takes time and effort, whereas users can assemble modular fixtures quickly—particularly if they already have the needed fixturing components in their toolrooms.

Those components include subplates and tombstones with a standardized grid pattern for holding an interchangeable assembly of fixtures, vises and accessories, such as blank tooling plates, angle plates, parallels and workpiece-setup components (for example, locators, utility blocks and clamps). Adapter plates that can be used to convert third-party vises, rotary tables, chucks or other devices into modular accessories are also often needed. 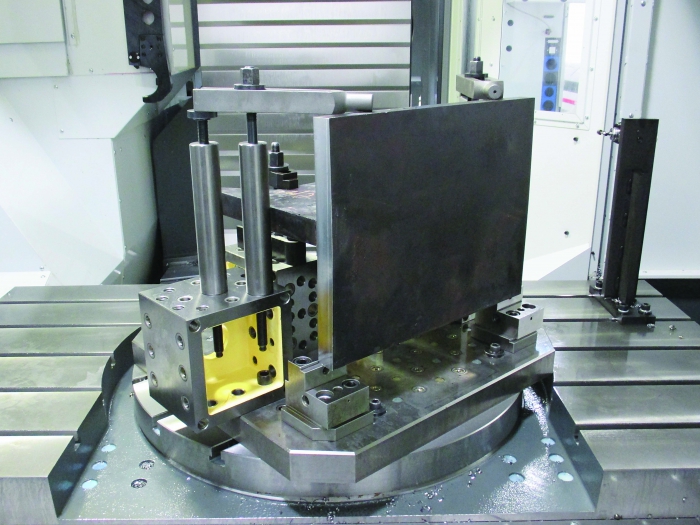 Modular fixturing components allow a job shop to more quickly respond to its customer’s need, said Aaron Hull, senior manufacturing engineer at Carr Lane Manufacturing Co., St. Louis. “You can put a fixture together in a day and start cutting.” This is a big advantage for core customers of modular systems, the growing number of job shops that typically see high-mix, low-volume production.

A well-stocked modular-fixturing toolroom is a serious investment, which may be hard for a job shop to rationalize.

“Whether it’s a dedicated fixture or their first step into modular fixturing, it’s a big challenge for high-mix, low-volume shops to justify the cost of the fixturing when it’s for a job that isn’t going to produce a lot of parts,” Hull said. “Seeing the payback can be difficult if you’re looking at it from the standpoint of a single job.”

He said the beauty of modular fixturing is that a shop can buy the fixturing components, build a fixture for a particular part, disassemble it and reuse the components for a different part. “You can spread out that fixturing cost across several parts rather than [incurring the cost of] building a dedicated fixture for a single part and having that cost need to be absorbed by that single part number.” 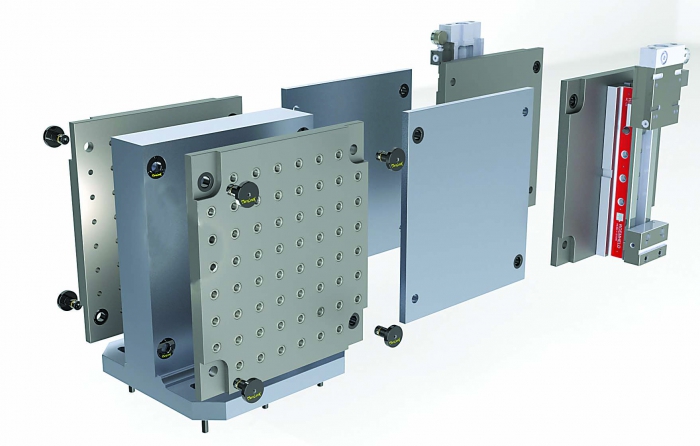 But realizing that capital-investment mind-set isn’t always easy, Hull acknowledged. “It’s difficult for them to figure out how to spread the cost throughout all those different jobs because they don’t know what job is coming next week or next month. It can be a challenge to swallow that large up-front cost for a complete modular-fixturing system. What jobs do they tie that cost to, and how does that work in their accounting system?”

Carr Lane Manufacturing allows a wary job shop to stick its toe in the water of modular fixturing before choosing to dive in all the way, according to Hull. The company offers complete modular-fixturing kits—ones with varied components and sizes.

He said: “But we also sell all the components individually. Someone doesn’t have to start out buying a complete system. They can start small and grow the kind and number of components they have in their toolroom as they need them.”

The company has a thick catalog of options. “There are many different components available, in English and metric units,” Hull said. “We are a manufacturing facility, and we make most of the components right here in St. Louis.”

And that’s just one company’s catalog. The available modular-fixturing components and systems are many and varied, and, whatever the application, chances are that products exist that can help.

For a job shop, such variety is all good, isn’t it? As new jobs and new kinds of jobs come in, the shop can pick from a smorgasbord of fixturing options. 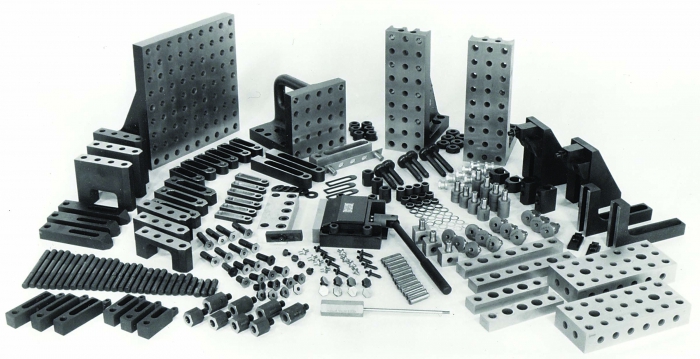 But it’s not that simple, according to Gordon Coope, president of Stevens Engineering Inc., Phoenix, which has specialized in modular fixturing for more than 35 years. Problems arise when the best fixturing option for a new job won’t work with the modular components from earlier jobs—an occurrence more likely when more than one modular fixturing company is involved.

“Workholding has evolved into a multiplicity of seemingly incompatible products,” he said. “Companies that purchased a product can find themselves stuck.”

Examples he noted include:

He noted that unlike machine spindles, which are available in just a limited number of choices—CAT 40, CAT 50, BT 30 and a handful of others—machine tables and pallets are not standardized. “T-slot size and spacing or tapped hole size and spacing can be different even within a single brand of machine,” Coope said.

One result is that a shop turns to subplates engineered to hold disparately sourced fixturing components—a good workaround, Coope acknowledged, but it tends to keep that shop locked into a single style of system.

“There’s a lot of loyalty to specific brands or systems. A shop thinks of itself as a ‘Kurt shop’ or a ‘Chick shop,’ or a ‘Stevens Engineering shop.’ And none of these systems are made to work easily with the others,” Coope said.

For this reason, at Stevens Engineering “we get lots of calls from manufacturers that ask, ‘Do you have anything that will work with this other style of workholding?’”

And not only from job shops. He noted a major shoe manufacturer in Oregon for whom Stevens made all its fixtures when it tooled up production of new molds for the soles of shoes. And for the past 15 years, a Connecticut-based aerospace manufacturer has relied on Stevens to produce fixture plates for its coordinate measuring machines used to inspect parts. Both companies needed Stevens Engineering parts designed to accommodate different legacy systems.

From Components to Systems

“For example, we have systems that have a ball-lock-style receiver plate that would go on the table or a horizontal tombstone and then a subplate that can be put on that Carr Lock fixture receiver plate,” he said. “You can set up your [otherwise incompatible] modular fixture on the Carr Lock subplate while the machine is running the previous job. From there you could immediately go from your modular-fixturing subplate to another subplate such as a blank Carr Lock subplate to which you’ve attached a vise.”

Brian Dodsworth, director of sales at Bluco Corp., Aurora, Ill., emphasized that a job shop that acquires its modular-fixturing components in a job-by-job, piecemeal fashion is headed for unnecessary complications. The best solution, when possible, is for the shop to think of modular workholding not as a collection of components but as a complete system—and that a good time to acquire one is when a machining center is purchased. 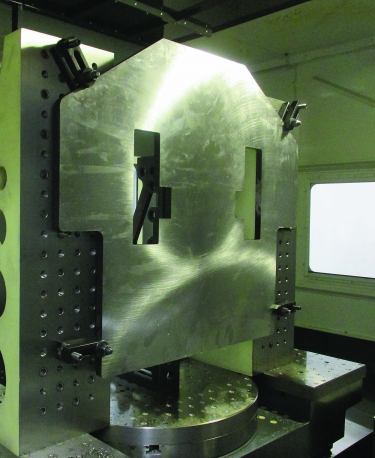 But if it can be done, it helps avoid more costly issues down the road. In short, Dods-worth said, if a shop starts with a genuinely comprehensive system, it won’t have compatibility issues.

“When you design your machining center from the ground up so that you have removable plates, you can swap a Bluco tooling plate off and put in a plate with, say, a Kurt vise when that makes sense. You’re not locked in,” he said.

For example, Bluco’s manufacturing facility in Aurora uses Kurt vises, as well as Ball Locks from Jergens Inc., Cleveland. “So if I were talking to shops who had that concern, I would step back and paint a bigger picture of how to approach the tooling for their machine so they can have interchangeability.”

Dodsworth said Bluco’s tooling system “hasn’t really changed in 20-plus years.” The company has innovated and adapted over time—“it hasn’t just been static. But the core system hasn’t changed. And when you have a comprehensive system, you don’t ‘grow out of it’” and need to use other vendors’ fixturing.

There’s another mind-set found at some customers that Dodsworth is trying to change. “The common method of workholding setup is that the machine stops, you open the doors, you tear down your fixture and set up your next fixture—all done in the machine, with the doors open and the machine idle,” he said. That might be OK for long production runs, but for low-volume, high-mix shops, it’s a throughput killer.

Better to set up offline. “With our system, the fixturing is all on a tooling plate, so all you have to do when you open doors is swap out tooling plates,” he said. “Your next fixture has already been set up on a tooling plate out- side the machine, offline, while the spindle was still spinning on the previous job.” So when the door opens, the machinist disconnects the tooling plate from the machine, pulls it out, loads the next one, closes the door and hits the button, and the machine is running again. “You’re really keeping to a bare minimum the amount of time those doors are open and [the machine is] not producing.”

Carr Lane Manufacturing, Stevens Engineering and other companies also promote the benefits of offline-fixturing setup to their customers as a boon to throughput. Some suggest it, but at Bluco, it comes across as more than that. As Dodsworth sees it, there have been two great innovations that made workholding setup easier: the use of CAD modeling to speed up fixture design and modular workholding to speed up fixture building.

“We think that offline fixture setup needs to be the third item on that list,” he said. “It’s an innovation that should become a standard practice for improving throughput.”

Getting Started With Modular Fixturing

Because of the ongoing issue of incompatible modular-fixturing systems, Stevens Engineering President Gordon Coope has advice for shops looking at any modular-fixturing product or product line—including his own: