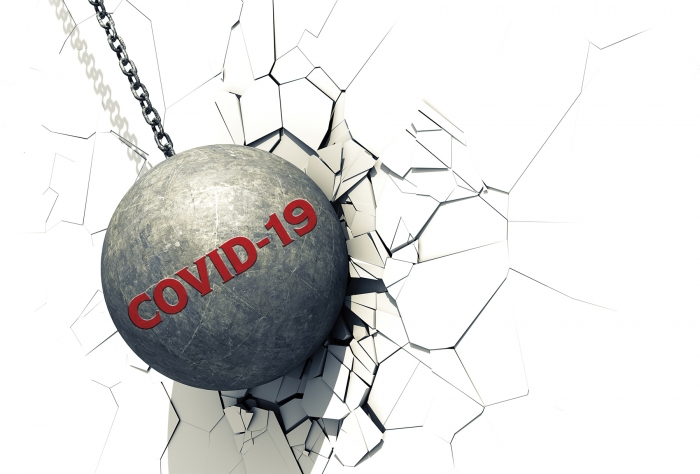 At 60 to 140 nm (0.000002" to 0.000006") in diameter, severe acute respiratory syndrome coronavirus 2, which causes COVID-19, is invisible to an unaided observer but has created an eye-popping disruption to the manufacturing economy.

According to San Francisco-based Fictiv, which offers a digital manufacturing platform, the global manufacturing and supply chain ecosystems have been among the hardest hit by the down-level effects of the pandemic. The company’s 2020 State of Manufacturing Report said 89% of surveyed senior decision-makers in the U.S. indicated a direct business impact from COVID-19. The report was based on replies from 215 individuals at manufacturers of medical devices, robotics, automobiles, airplanes and consumer electronics.

Nonetheless, some industries have fared better than others. Due to the need for certain products, such as ventilators and personal protective equipment, the medical industry has boomed since the start of the pandemic, said Chief Operating Officer Jean Olivieri.

“A lot of part factories have seen a high demand and have been able to produce medical goods that have not been supported beforehand,” she said.

Overall, 97% of survey respondents said COVID-19 has created business opportunities, and most manufacturing leaders expect the disease to make their companies stronger.

As a result of that disruption to production, the provider of critical industrial information and analytics expects a 21% decline in year-over-year North American automotive production, with a total of 13 million vehicles rolling off assembly lines by the end of 2020, he said.

With the production lockdown in the rearview mirror, the auto industry is putting the pedal to the metal.

“What is odd is how resilient the market has been, all things considered,” Anderson said. “I would have never guessed that in March or April within two to three months we would be running at pre-pandemic levels.”

He said although auto sales were down significantly, there was no inventory replenishment during the lockdown.

“Getting the supply chain and automakers back and running has been a long road,” Anderson said, “but they have been able to get back to pre-COVID levels. And we see the expectation to keep running at those levels for at least a few months to get that inventory back in the pipe.”

For 2021, he said IHS Markit expects a 17.6% increase in U.S. automotive production compared with this year, or 15.2 million vehicles. However, that level is down about 7% compared with 2019 figures, and fleet activity still will be a bit constrained.

Throughout the pandemic this year, consumers willing and able to purchase a vehicle could do so even though inventory has been slightly limited, but year-over-year sales will be down for 2020, Anderson said.

“Month over month,” he said, “we see a need to run at very strong production levels as OEMs continue to get their inventories built up after the prolonged shutdown. That is something we do expect through the end of the year and possibly in 2021. Thereafter, we expect production to line up with the new sales level.”

Waiting on the Tarmac

Compared with automotive, the outlook for the aerospace industry isn’t so rosy, as many people have avoided flying or have been restricted from traveling to certain destinations.

“We have never seen anything quite like this on the commercial aero side,” said Richard L. Aboulafia, vice president of analysis for Teal Group Corp., about the impact of COVID-19.

The Fairfax, Virginia, firm provides analysis of the aerospace and defense markets.

Aboulafia said commercial aerospace likely will take three years to recover, “but the challenges are unprecedented.”

In his report COVID-19 and Civil Aviation Markets: New Dawn Fades, he said traffic numbers remain apocalyptic as the pandemic persists, declining 63% for 2020. As international traffic has been hit the hardest and longest, twin-aisle jetliners are the most damaged aviation segment, followed by single-aisle jetliners, business jets and rotary-wing aircraft, he said.

“On the positive side,” Aboulafia said, “defense is completely unaffected.”

He said pure-play contractors, such as Lockheed Martin Corp. and Northrop Grumman Corp., and suppliers with the most defense business are in the best shape.

“If anything,” Aboulafia said, “defense is getting a bit of a boost as people throw cash at the industry in that direction. Of course, that doesn’t make up for the terrible downturn on the commercial side.”

Commercial aircraft deliveries are expected to experience a year-over-year decline of 46% in 2020, according to analysis by New York City-based consultancy Deloitte Consulting LLP, the International Air Transport Association and commercial aircraft manufacturers. As a result, the industry is anticipated to deliver about 670 commercial aircraft this year compared with 1,243 in 2019 and a record high of 1,606 in 2018.

The 2020 figure is down because some airlines are generating only 30% of their pre-pandemic revenue per passenger kilometer or mile, said Robin Lineberger, U.S. and global aerospace and defense leader for Deloitte Consulting.

For 2021, Deloitte Consulting forecasts that the number of new commercial aircraft deliveries will rise to 900.

“We believe there will be a lag to 2018 levels beyond three years,” Lineberger said. “You have to absorb the capacity that was sidelined and introduce new aircraft that can be delivered.”

The numbers are a bit skewed on account of the situation with the Boeing 737 Max narrow-body airliner, which was grounded in March 2019 following two crashes in which 346 people were killed, Aboulafia said, adding that the 737 Max is the largest U.S. aircraft program and the world’s second largest.

“Because we weren’t seeing many of them last year because of the production stop, the downturn isn’t as bad as it would be otherwise,” he said. “Instead of building 500 last year, you’d see a worse crash, a far more serious drop-off.”

With fewer commercial aircraft being delivered, the parts manufacturing economy has slowed as well.

“We have been concerned about mid-to-long-term damage to the supply chains,” Lineberger said. “If people don’t make it through this, it takes a long time to develop substitutes because of the certification of the parts.”

Aboulafia concurred that a lot of mid-to-lower-tier part suppliers are experiencing tension partly from not having deep pockets to weather a prolonged downturn.

“Inevitably, tough decisions are going to have to be made,” he said, noting that this might involve selling a business or merging it with another company. “By some estimates, 20% of that supply chain might not come out of this in its current form.”

A glimmer of light, however, shines through the overcast.

“If there is any positive news in this picture,” Aboulafia said, “compared to 2008 the financial sector is intact, so people’s ability to get credit is in better shape.” 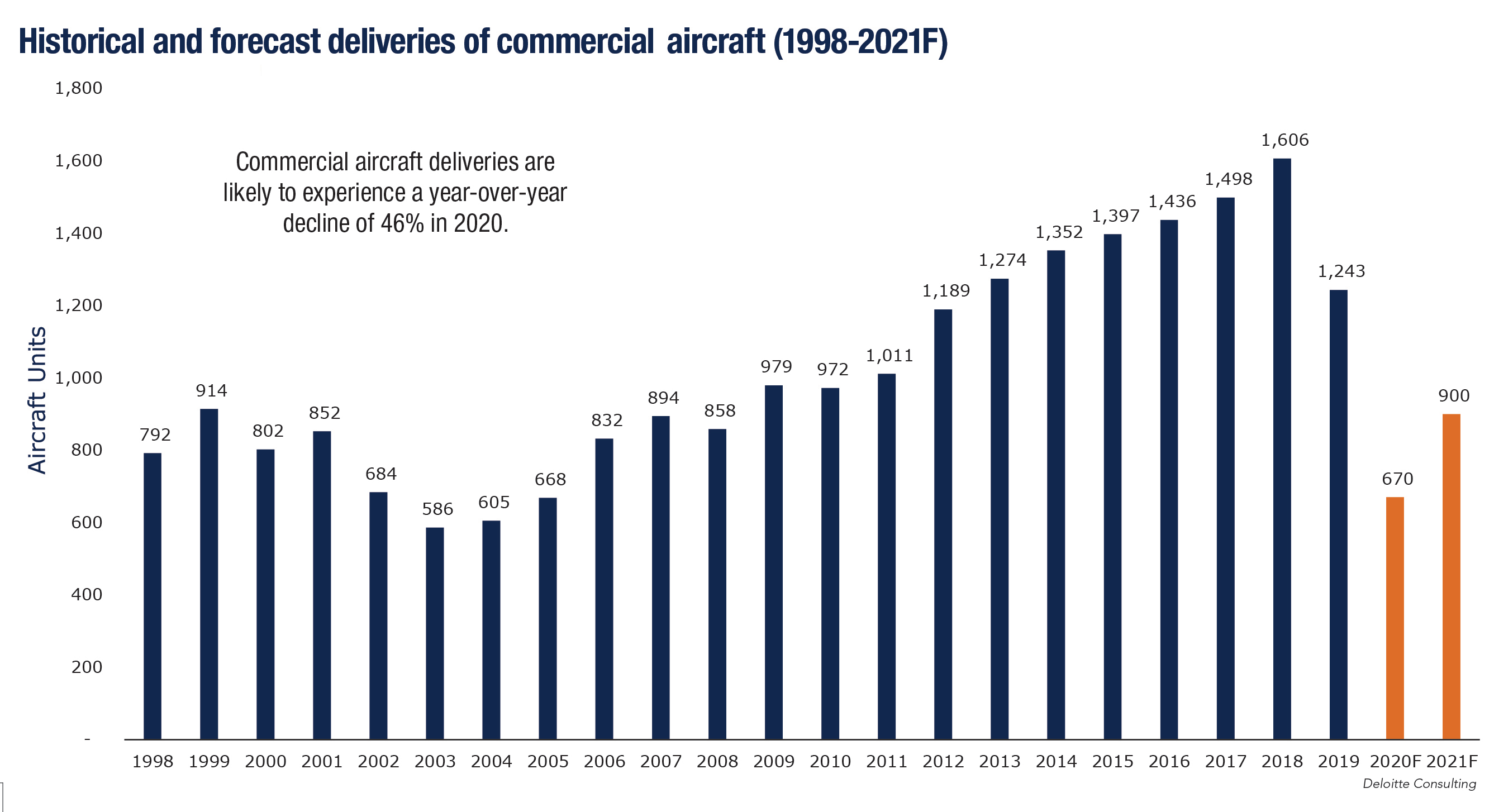 Not only are fewer planes being delivered, but the ones that remain in service are relatively new, with airlines removing from service the older, more expensive ones to maintain and operate. This scenario means that aftermarket and sustainment companies don’t need to produce nearly as many replacement parts, such as brake pads, or overhaul as many engines as prior to COVID-19, he said.

“That’s the part of the industry that’s really getting clobbered,” Aboulafia said, “and that’s just a function of planes not being flown.”

Lineberger agreed with that assessment.

“We have projections that we are going to see a falloff in the MRO market,” he said. “We are seeing evidence of organizations looking to sell the business because of the impending decline of that market.”

Lineberger said the defense industry is booming for aerospace projects, plus the defense markets for land vehicles, including tracked and wheeled ones, and ships, such as submarines and surface vessels, are vibrant.

“The government is taking the opportunity to spur the industrial base by accelerating the acquisition of major platforms,” he said, “increasing the numbers they buy. There are opportunities. It’s just that you have to look beyond commercial aviation.”

Although other aviation vehicles have been discussed for many years and development continues, they are not ready for prime time and probably won’t be for a while. Those include manned rockets for space tourism and vertical takeoff and landing vehicles, or flying cars.

Lineberger said the space tourism market doesn’t have a measurable effect on the broader industry.

“It is really cool and sexy,” he said, “and it is the future. What it isn’t is a substitute for what is down in the aircraft market.”

The same holds true for vertical takeoff and landing vehicles.

He said when that market does take off, it will be an exciting time for those targeting aviation and automotive.

“It will be the first time we produce vehicles that can fly at near automotive rates,” Lineberger said.

Aboulafia agreed that the technology needed for the urban air mobility market won’t be available to allow significant adoption for a decade or so.

“We are all haunted by magazine covers from the 1950s that assured us this was the future,” he said.

Regardless of the market being targeted, successful manufacturers continue to invest in advanced technologies to increase production efficiency, maximize existing labor and reduce the cost per part while generating less waste, Olivieri said. She said Fictiv is investing in automation and building a digital thread that courses through the entire production environment.

Nonetheless, building a digital network is not a core competency for manufacturers, and development of such networks is highly fragmented, with many manufacturers not doing it well, she said. While 87% have a high-priority digital transformation initiative, only 14% believe that their digital initiatives are well funded, according to the 2020 State of Manufacturing Report.

“Investment is needed to become more efficient,” Olivieri said, adding that platforms are available to help manufacturers develop a digital thread so they don’t have to do it internally.