One day, everything in space will be made in space. That’s the ultimate goal for Made In Space Inc., said Matt Napoli, vice president of in-space operations, during his Oct. 25 keynote presentation “Made in Space: Manufacturing at 17,200 mph” at The Quality Show. The trade show took place Oct. 24-26 at the Donald E. Stephens Convention Center, Rosemont, Ill.

Napoli said the Moffett Field, Calif.-based company began its mission in 2014 with the zero-gravity experiment of 3D printing plastic parts on the International Space Station (ISS). “There was no other way to make products in space until 3D printing came along.”

But first, Made In Space had to convince NASA that printing parts in space was possible and to provide funding for the project, he added. The ISS’ first 3D printer operated in a containment system because of safety considerations, but the second one does not. 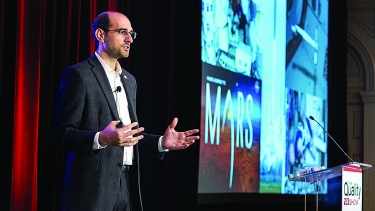 Matt Napoli, vice president of in-space operations for Made In Space, presents a keynote address about manufacturing components in space at The Quality Show. Image courtesy of BNP Media.

According to Napoli, more than 100 parts have been printed on the ISS from three polymer materials: acrylonitrile butadiene styrene (ABS), polyetherimide/polycarbonate (PEI/PC) and polyethylene (green PE). The astronauts are not informed in advance what part will be printed next.

“The material characteristics are the same in space as on the ground,” he said.

With the world preparing for an eventual manned trip to Mars—the trip would take about 2 years—printing parts when needed will help ease crowding in the space vehicle and make the trip possible, Napoli said. Having 3D printing capability will also help space travelers overcome the challenge of living in small quarters with other people for 2 years and “not going crazy.” For example, family and friends could send printable presents.

Now that the first project goal has proven that additive manufacturing in space is possible, Made In Space is working on its next set of challenges, Napoli said. Those include making products in space for Earth applications—because, he noted, the planet houses significantly more customers than the space station does—and manufacturing and assembling large structures in space, such as satellites. The former includes commercial manufacturing of microgravity-enabled exotic optical fiber, which isn’t as clear and has less bandwidth when made on the ground. The latter project aims to develop autonomous manufacturing and assembly of spacecraft in orbit. Another application is satellite repair.

In addition, Napoli predicted that in 2 to 5 years metal parts will be printed in space with a metal wire-fed system to avoid the hazards a powder-based approach poses. The company is also working on a hybrid machine to perform additive manufacturing and subtractive machining, he added. With metals, the grain structure of a part made in space is different from one made on Earth because gravity doesn’t pull on the grains.

More challenging, Napoli said, is figuring out how to print electronics and motors, adding that it might take a decade or two until an entire 3D printer can be produced in space.

Looking further out is the prospect of mankind building parts and structures on other planets, such as Mars, using dirt from that planet and turning an asteroid into a spacecraft by using its own mass and redirecting it.