Manufacturers learn to invest in training

Every parts manufacturer, regardless of size, has some sort of training program, and programs are nearly as varied as the companies themselves. Whether it’s something as simple as handing out a pamphlet about company policy or as involved as an apprenticeship program, it’s just a given: Where there are employees, there is training. However, while some companies regard it as a necessary evil, others have found that investing in this universal necessity yields substantial benefits—and, in the long run, actually saves money.

Investing in the Human Fund

LeanWerks LLC, an Ogden, Utah-based job shop, uses open-book management in its apprenticeship-style training program, with the goal of giving employees a holistic understanding of the company’s inner workings.

The standard approach to job shop training is to hire someone and then have him shadow an experienced machinist until he feels competent enough to work on his own, said Reid Leland, LeanWerks founder and president. “Our program, on the other hand, includes on-the-job training with all our systems, web-based video training and work done in conjunction with local trade schools, so part of the program involves the participant spending a certain amount of hours in the classroom, learning the theory of the fundamentals of the trade.” 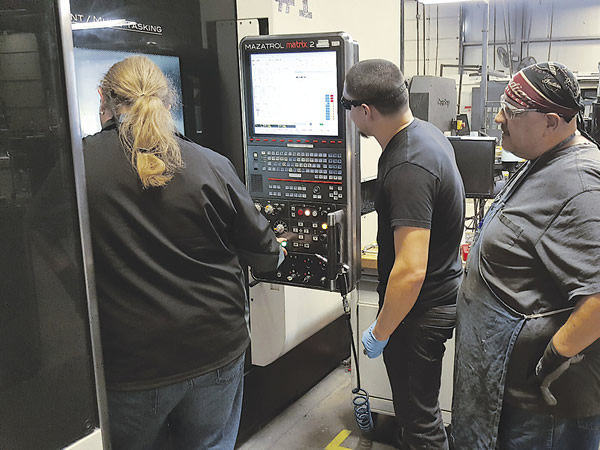 This combination of on-the-job training and classroom learning falls somewhere between basic shadowing and a traditional apprenticeship, and while the investment is sizeable, Leland said the results are invaluable.

“We are committed to investing in our employees, so we have invested in this learning management system that we have found helps people get the most out of it,” he said. “The result is reduced time for the employee to come up to speed, increased consistency in training and ability across our workforce, and an ability to provide documentation of every step.”

SGS Tool Co., Munroe Falls, Ohio, is another manufacturer that has benefitted from an investment in training. According to Gary Miller, director of training and occupational development, that investment in employees is what separates a good training program from a great one.

SGS’s training begins with a formal onboarding. According to Miller, the toolmaker’s safety director goes over safety policies and assigns protective equipment needed for the job; human resources goes over the paperwork; IT goes over email policy (and more, depending on what electronic devices an employee will use); and the associate involvement director goes over programs like training, tuition reimbursement, apprenticeship programs and anything else the company is offering at the time. Training also involves an R&D demo, where tools are shown in action, and a plant tour. And that’s only the first day.

“Our training is all structured,” Miller said. “Every position we have at this company has a training plan attached to it that outlines, step by step, what the associates need to do. Our trainer goes over the training plan, and we have both the associate and the trainer sign off on each step, verifying that the associate has learned and can demonstrate the skill. The program is constantly evolving as, in the name of continuous improvement, we are constantly updating our methods and materials.” 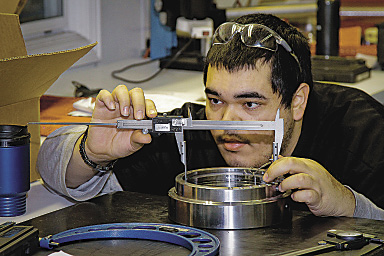 Perhaps the most important tenet of the SGS training regimen is feedback. Miller works directly with all newly hired sales engineers and handles training at the Munroe Falls main office.

“At the end of each day, they come into my office and I ask: What went well? What didn’t? What do you need more of? And I work additional training into the gaps that they have identified,” he said. “We are constantly seeking feedback for improvement. We always ask where we can improve, and we always listen to what we’re told. A new hire who has worked for several of our competitors told me, after finishing his training, that our program was the best he had been through. As a trainer, that makes me feel really good.”

Endmill manufacturer Advanced Tool Inc., Marcy, N.Y., noticed that training new hires was consuming an inordinate amount of time on the part of the shop’s senior staff. The company intended to make improvements to the training process—but wound up revamping it completely. Now they’re looking to the future.

What Advanced Tool hopes to establish in the old system’s stead, explained Sherry DePerno, president and CEO, is an updated version of a traditional apprenticeship program, something to help new hires get a certification they can even take with them if they leave. To this end, the toolmaker has been working with the U.S. Labor Department for several years, hoping to establish a program that others within the industry will support and adopt, with the goal of making manufacturing more appealing as a career choice rather than a fallback option. Citing the “tool and cutter grinder” apprenticeship of yore, DePerno hopes to see a similar program, updated with CNC technology in mind. 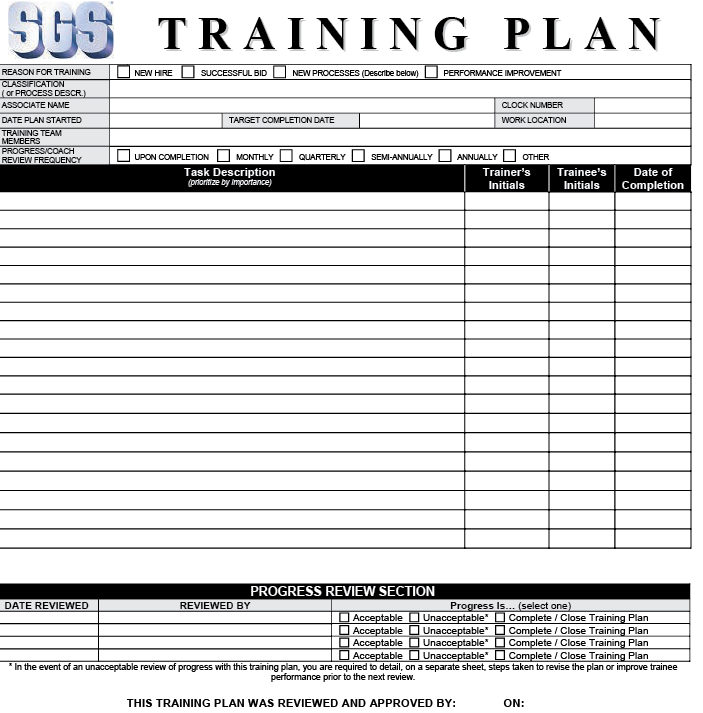 SGS Tool uses checklists like this one to verify a trainee’s progress and get feedback on each step in the training. Image courtesy SGS Tool.

“A major problem with training in general is that people assume that Advanced Tool employees only gain proficiency in what Advanced Tool does, but that shouldn’t be the case,” DePerno said. “In the days of an apprenticeship-type program, where we as manufacturers were given a curriculum to adhere to when training employees, we would all be teaching basic, universal concepts that could be taken anywhere. If people knew they were going to walk away with some sort of a certificate, they would have an incentive not only to go into the field in the first place, but to stay in it and grow professionally.”

There is hope: SGS offers an apprenticeship program similar to what DePerno and company are hoping to create. Held in conjunction with Stark State College in North Canton, Ohio, the program not only lets SGS employees earn a state-of-Ohio-issued journeyman toolmaker card—but also credits toward a college degree.

“They spend 4 years to get that card, and, when they’re done, not only are they journeyman toolmakers, they are 58 percent done with the requirements for an associate’s degree in applied technology from Stark State College,” Miller said. “We also have a tuition reimbursement program where, if a class is in your field and you get an A, we reimburse 100 percent of your tuition. So, if you’re ambitious, you can get your bachelor’s degree and all you have to pay for is parking and books.”

While Advanced Tool and SGS are working to bring back certifications that seem to have sadly fallen by the wayside, the National Institute for Metalworking Skills Inc. has been working since 1994 to establish a new standard.

“NIMS is just now starting to gain notice, whereas previously a lot of people, even within the industry, didn’t necessarily know what they were,” said SGS’s Miller. Indeed, with the company having issued its 100,000th credential this year, the accrediting organization has firmly established its legitimacy—and its graduates are pushing for more.

“We’re seeing significant growth from people who have been through a credentialing program urging their employers to make higher-level credentialing available, which is a new development,” said NIMS Executive Director James Wall. “Our CNC credentials always seem to be in demand, whether it’s for CNC operator or CNC setup and operation. We are also seeing an uptick in some of the more traditional programs, specifically stamping and press setup and operation, which we haven’t seen interest in for a long time.”

Incorporating NIMS credentialing into an existing training program is a relatively simple matter, he explained, and can frequently help shops identify weaknesses in the system.

“We don’t require a program to be accredited to do credentialing and those, which we refer to as competence-based apprenticeship programs, actually make up the majority of the shops who offer credentials,” Wall said. “They need to establish a proctor for the written exams, someone within the company who is not involved with the direct training of the candidate. The organization also needs to register with NIMS, which gets their employees into our system as candidates. The registration is a very straightforward process that can usually be accomplished in a few minutes. We’ve had a number of companies go through the process and it helped them realize and correct a number of issues that had gone unnoticed for a long time. Critically examining your process helps you uncover things that you might not notice on a day-to-day basis.”

However, Wall continued, there are still those who are reluctant to have employees get any type of certifications, which he attributes to a pervasive misconception within the industry that if people have a certification they may try to take it elsewhere. 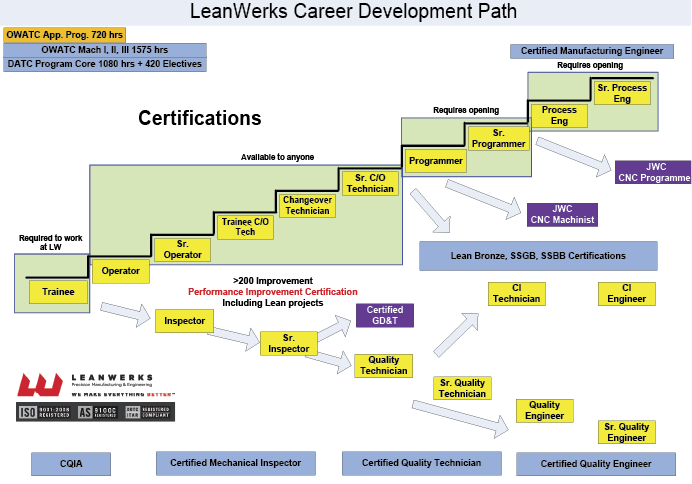 To help employees understand what options are available to them, LeanWerks utilizes visual aids such as this one. Image courtesy LeanWerks.

Advanced Tool’s DePerno agreed that this fear is unwarranted, and, even if it wasn’t, she would rather see programs that benefit the industry as a whole, rather than only the company in question.

“Colleges aren’t going to develop a specific program just for me, nor should they,” she said of the hypothetical apprenticeship her company has been working on developing. “There has to be an interest, there have to be other companies that need this. But I can see other companies absolutely benefitting from having their engineers be able to dive into cutting tool geometries, from a usage standpoint, and understand how changing the geometry of the tool will change the rest of the process. We’re trying to approach our training program from the perspective not of what’s going to benefit us, but what will benefit the industry as a whole.”