A spindle protection system based on magnetic force could exert a pull on part manufacturers experiencing costly machine crashes.

If a collision occurs during heavy-duty cutting, a machine spindle can be subjected to tons of force. Besides breaking a spindle, a crash can damage a tool and workpiece and result in significant machine downtime.

The chances of a collision are greater than normal during the initial phases of a machining process. At these times, crashes can be caused by setup mistakes and programming errors in tests of new CNC programs.

“Programs for CNC mills are made up of thousands of instructions, and there is a high risk of something not being perfect,” said Dante Payva, New England sales manager for GF Machining Solutions LLC, Lincolnshire, Illinois. “If something is not correct and the machine makes an unexpected move, it could damage the spindle.”

Preventing damage caused by collisions is the aim of the Machine and Spindle Protection system developed by GFMS. The self-contained MSP system relies on permanent magnets in the spindle housing. During standard machining operations, the strong magnets hold the spindle in position. In the event of a collision that generates sufficient force, however, the magnets disengage, allowing the spindle to deflect either to the side or into the machine’s z-axis housing. At the very outset, he explained, this disengagement is detected by location sensors that trigger emergency braking action within nanoseconds, bringing the machine to a stop. The idea is to halt the machine before the spindle moves far enough to break, as illustrated below. 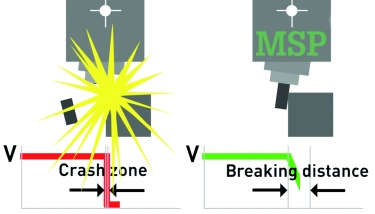 A crash involving a machine spindle (left) can cause costly damage and downtime. The MSP system, however, allows a spindle to deflect after a collision, giving the system extra time and distance to take emergency braking action before a spindle breaks. V is the linear spindle velocity during a machining operation. Breaking distance is the amount of spindle movement after a collision that causes breakage. Image courtesy of GF Machining Solutions

The system normally activates when a machine is operating in a setup or safety mode that lowers the maximum feed rate.

“Typically, you’d have the system on during the testing or prove-out phase of your new program or process,” Payva said. “Once you have run it once or twice and feel confident about it, the risk decreases substantially. Then you can turn the system off, and the machine would go back to its max feed rate.”

However, some shops always leave the system on for constant protection, he said, at the cost of a small amount of the feed rate they otherwise could achieve.

If a collision occurs, the system can reduce the resulting force on a spindle by 90%, according to GFMS. The system protects spindles in all five axes of machine motion.

“Many other systems protect the machine and spindle from a crash in the direction of the spindle axis,” Payva said. “But with our system, you can crash in any direction, and it has the same safety impact.”

He said other protection systems take the brunt of collision energy and thereby damage themselves to prevent a spindle and other machine components from being damaged. So even if they do their job, those systems need to be replaced after a crash, resulting in machine downtime and added costs for users.

By contrast, the MSP system doesn’t need to be replaced after a crash.

The magnets and spring action bring the system back to its original position, “and it’s ready for another crash immediately,” Payva said.

In addition, the system does not wear and requires no maintenance.

The system is currently an option for three GFMS mills.

Adding to the risk of spindle crashes is the shortage of skilled machine operators.

“Companies are investing in high-performance machine tools and then handing them off to people who may not have all the capabilities needed to operate them,” Payva said.

Under such circumstances, opting for the system “is a nice way to protect yourself,” he said. 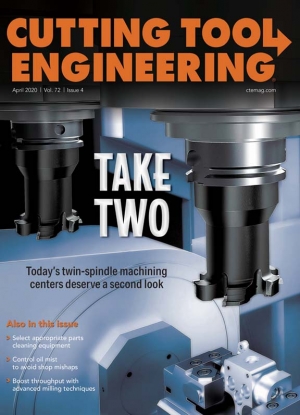