When CNC milling machines were conceived, some in the metalworking industry weren’t satisfied. These people asked why a computer couldn’t also manage tool changes so a person wouldn’t be needed to make them.

This was the impetus behind the development of the automatic toolchanger, according to Kevin Holdmann, operations manager for TAC Rockford (Ill.), which sells ATCs. Holdmann said almost all CNC machines come equipped with an ATC.

He explained that automated tool-changing processes work two ways. Either the spindle moves to exchange its current tool with another in a magazine, or a mechanical arm makes the change. 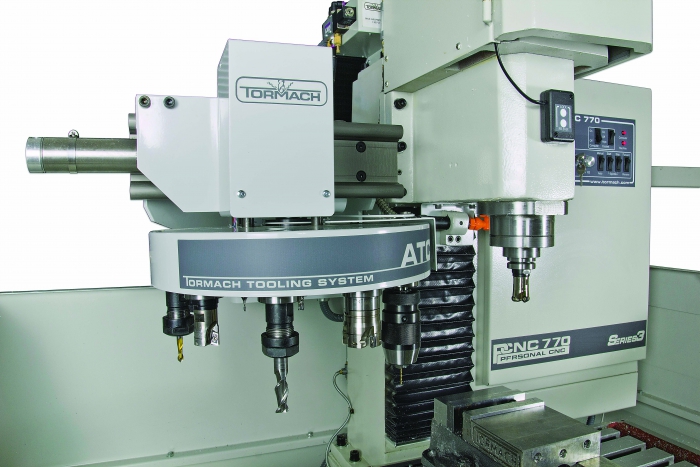 Machining centers are typically equipped with drum-style ATCs, Holdmann said. These disc-shaped devices have tools arranged around their perimeters. There are also rack-style ATCs capable of holding numerous lined-up tools. These ATCs include a mechanism that shuttles tools between the machine and their pockets on the rack.

Another option for holding and exchanging multiple tools is a chain-type ATC. To picture these, Holdmann said to think of a large circulating bicycle chain with toolholding linkages. The chain is set in motion to retrieve a particular tool for placement in the spindle.

Long chains and sprockets are replaced by cams in CTM-series toolchangers from the Italian firm Colombo Filippetti Spa. The result is a simpler system that requires less maintenance, according to Chris Salamone, sales manager for Indexing Technologies Inc., Ramsey, N.J., which sells them. Priced from about $15,000 to $40,000, CTMs clamp, extract and exchange tools, simultaneously inserting the new one in the spindle and the old one into its magazine.

Besides saving labor, ATCs can change tools quicker than a person, Salamone said, especially when swapping relatively heavy tools that might be difficult for an operator to handle. But, he added, ATC advantages would be diminished in applications where the same tool is applied for long periods of time.

One thing to be said for human toolchangers is that they’ll notice a broken tool while an ATC won’t, said Nolan Serink, engineering manager at Tormach Inc., Waunakee, Wis., which offers ATCs. Tormach mills have what Serink
describes as an umbrella-style toolchanger that features a pneumatic cylinder to move the toolholding carousel toward the spindle for tool changes and away again once the spindle grabs the new tool and the old one is placed in an empty fork in the carousel.

“You can probably change a tool by hand almost as fast as our toolchanger does it,” Serink admitted. But a Tormach ATC, which costs about $4,500, eliminates the need for constant operator monitoring of a machining process for tool-changing purposes. So, for example, it would allow an untended machine to run a multiple-tool program overnight.

According to TAC Rockford’s Holdmann, many machining systems have essentially two ATCs: a small, nearby one that serves the machine and another mechanism that’s constantly exchanging the tools in the small toolchanger with those on a larger rack to keep the small system supplied with the tools needed for upcoming stages of the machining process.

He said the idea is that “the closer you can keep the next tool [needed] to the spindle, the faster you’ll be able to start machining again” once a tool change is made. “So in the small toolchanger, you might have 10 tools ‘on deck.’”

A more recent innovation cited by Holdmann is the use of radio-frequency identification (RFID) tags to add intelligence to the tool-changing process. Placed in toolholders, the tags are read by the machine so it knows where to find every tool in the toolchanger. With a chain-style toolchanger, for example, the chain might have to cycle halfway around to bring the next tool needed under normal circumstances. But with added intelligence provided by the RFID tags, Holdmann said, the machine can sort the tools based on how they are used in the program, “so the next tool in the chain is always the next tool needed.”