Harsh chemicals. Sandblasting. Abrasives and elbow grease. These are just a few of the ways in which rust and dirt are removed from machined parts. But what if there was a noncontact way to strip off even the worst corrosion and grime from virtually any surface and do so more quickly and cost-effectively than conventional cleaning methods?

There is such a method: laser cleaning.

More Is Not Better

If you’ve ever used a laser marker you’re already familiar with this nontraditional technology. It uses galvanometer-directed, solid-state lasers with tunable power levels and pulse durations to mark everything from circuit boards to medical components. Tune one of these lasers with just the right amount of power and pulse duration and they do an excellent job of cleaning parts. 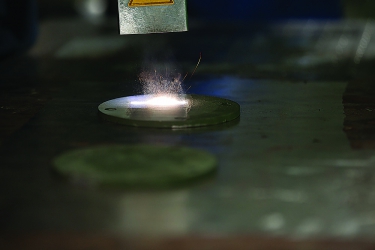 “The lasers used for cleaning apply a large amount of peak power in a very short amount of time,” said Ramsey Cook, business development manager for laser micromachining at Trumpf North America, Farmington, Conn. As an example, Cook noted the TruMicro Series 7000 is a solid-state, disc-based fiber laser with a pulse duration of only 30 nanoseconds. However, the laser applies up to 3mW of infrared light in that time.

“This speed allows you to ablate a variety of coatings or remove corrosion and grime without affecting the substrate," Cook said. “The energy dissipates before any appreciable amount of heat can be absorbed by the base material.”

Ironically, these extremely brief but energetic blasts are supplied by a laser with roughly the power of a microwave oven—only 750w for Trumpf’s Model 7050 laser, with some models putting out little more than a good-sized light bulb would. According to Cook, this short pulse, low-power approach is more effective than using a continuous-wave, high-power laser, such as the 4kW and greater versions found in Trumpf’s line of industrial laser cutters. 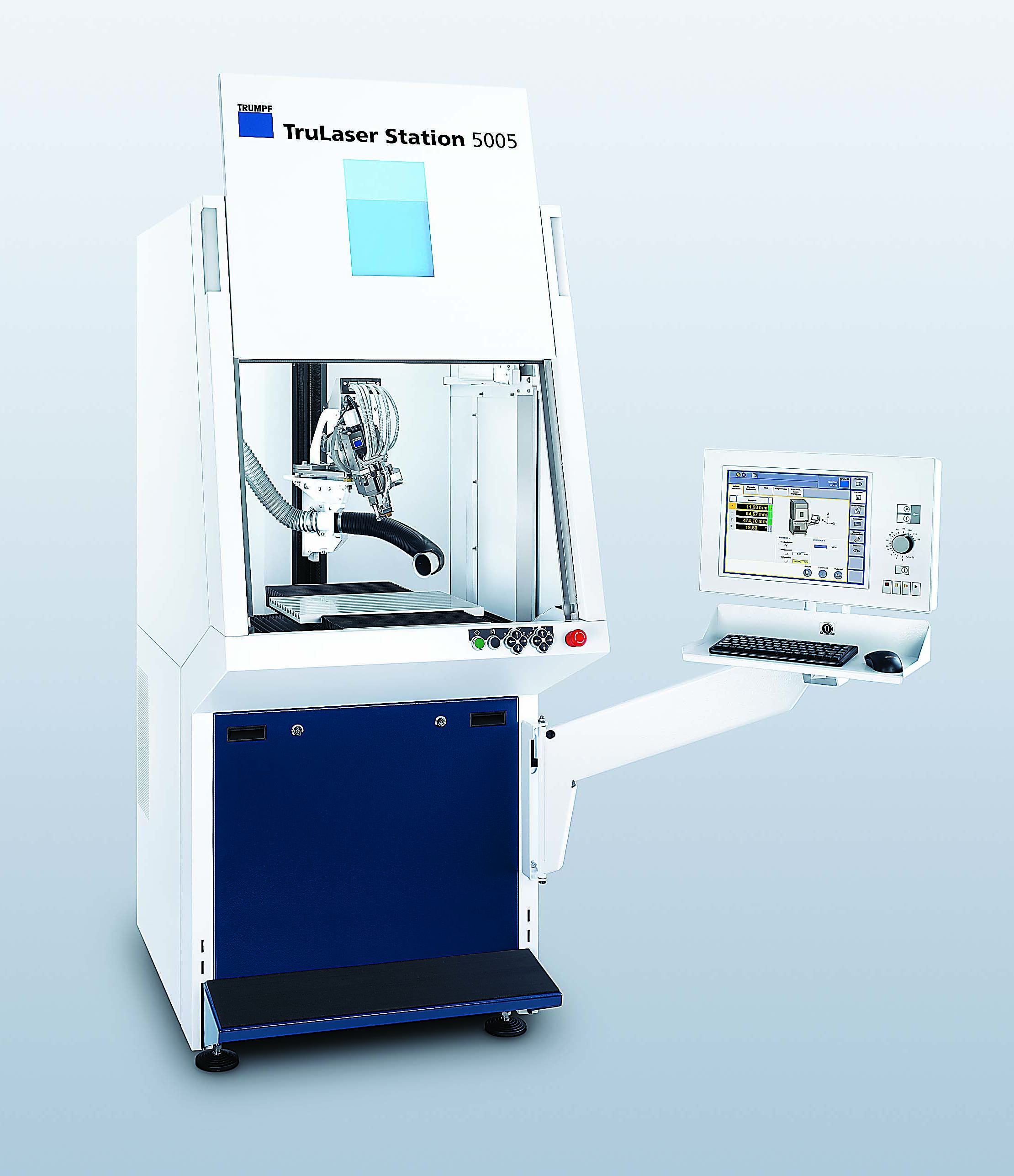 “Because of the peak power that’s applied during laser cleaning, the material is vaporized very quickly and consistently.” Cook said, noting there’s no risk to the substrate as there would be with a cutting laser. He added that a smaller laser also means a lower investment and reduced energy consumption. “Because there’s no need for chemicals, abrasives and other consumables, as with alternative cleaning methods, the total cost of ownership is much lower as well, without having to deal with OSHA and EPA regulations.”

Lasers for cleaning are fast as well. Cook said an area roughly the size of a hand can be cleaned every second, easily cutting through oil, grease, rust, oxide, fingerprints and protective films up to 50μm (0.002") thick. “Most of the applications we see are for cleaning two surfaces before joining—for instance, the aluminized silicon coating on automobile blanks and other types of protective layers, such as polymers and paints, to protect metal parts during shipping—or for removing surface oxides before welding or brazing. These lasers are perfect for that kind of work.” 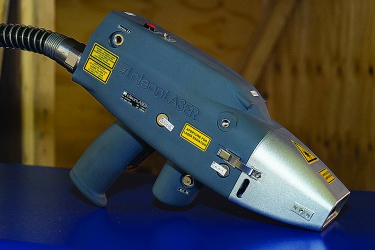 This hand-held optic has an integrated vacuum channel for drawing hazardous fumes away from the work area. Image courtesy of Adapt Laser Systems.

Despite the apparent gentleness of these devices, most are Class IV lasers. Appropriate safety measures must be taken to avoid eye and skin damage to nearby workers. This is especially true when one considers that many systems are hand-held.An untrained operator could inadvertently activate the device on a co-worker, causing serious harm. As such, anyone near a laser must wear infrared-rated eyewear, andshielding should be in place around the work area. In addition, suitable clothing should be worn to avoid the “sunburn” or skin blistering that might occur in the case of direct contact with laser light.

Davidson said the risk level goes down because the power of a cleaning laser is lower than other industrial lasers, but the consequences of improper use do not. Adapt Laser Systems incorporates safety training into every laser sale.

Davidson conceded that laser light isn’t a one-size-fits-all cleaning solution. He explained that it probably won’t be suitable for general-purpose rust removal. Furthermore, when removing material layer by layer in a discerning fashion, it might not be as fast as media blasting.

“You need the right application,” Davidson said, “whether it’s to prevent damage to an underlying metallic substrate, for removing or capturing hazardous materials or for preparing for a subsequent process, such as welding, brazing or coating. Those are the applications where we excel. It’s just not economically feasible to purchase a laser system for cleaning a bunch of rusty axles, not when a media blaster does just as good a job.”

Laser cleaning equipment comes dear. A basic hand-held device sells for roughly $80,000, while an automated system can run up to $250,000 or more—possibly a lot more.

According to Dr. David Gillen, CEO of Blueacre Technology Ltd., Dundalk, Ireland, this investment makes laser cleaners especially well-suited to customers with a dedicated, high-volume application where the laser can be automated for around-the-clock use or to companies that have a variety of smaller jobs where a mobile laser can take the place of conventional chemical and abrasive cleaning. 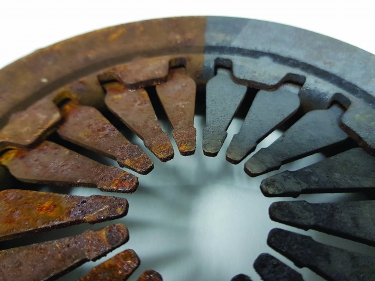 A before-and-after view of a laser-cleaned surface. Image courtesy of Blueacre Technology.

“There are trade-offs,” he said. “The investment is certainly much higher with a laser, but you can’t equate it to a bead blaster. Fiber-based lasers are solid-state devices, so you can easily see 200,000 hours of usage before anything goes wrong. Compare that to the ongoing costs for abrasive media or the cleanup and environmental concerns with chemical cleaners. Ultimately, the total cost of ownership comes out about the same but with much less hassle. Just point and click the laser, and you’re cleaning whatever it’s aimed at.”

Like others in this industry, Blueacre provides systems integration with its cleaning lasers, whether that’s attaching one to the end of a robotic arm or surrounding it with a gantry-style motion control platform. Blueacre does not yet sell its products in the U.S., but Gillen has received numerous inquiries and is actively seeking a qualified distributor.

One company working in the U.S. and internationally is IPG Photonics Co., Oxford, Mass. Bill Shiner, vice president of industrial products, said lasers are often used to prepare tailored blanks for the auto industry (semifinished components made of different types and thicknesses of steel that are welded together, then sent to secondary stamping) or for drawing operations (door modules and side members, for example). 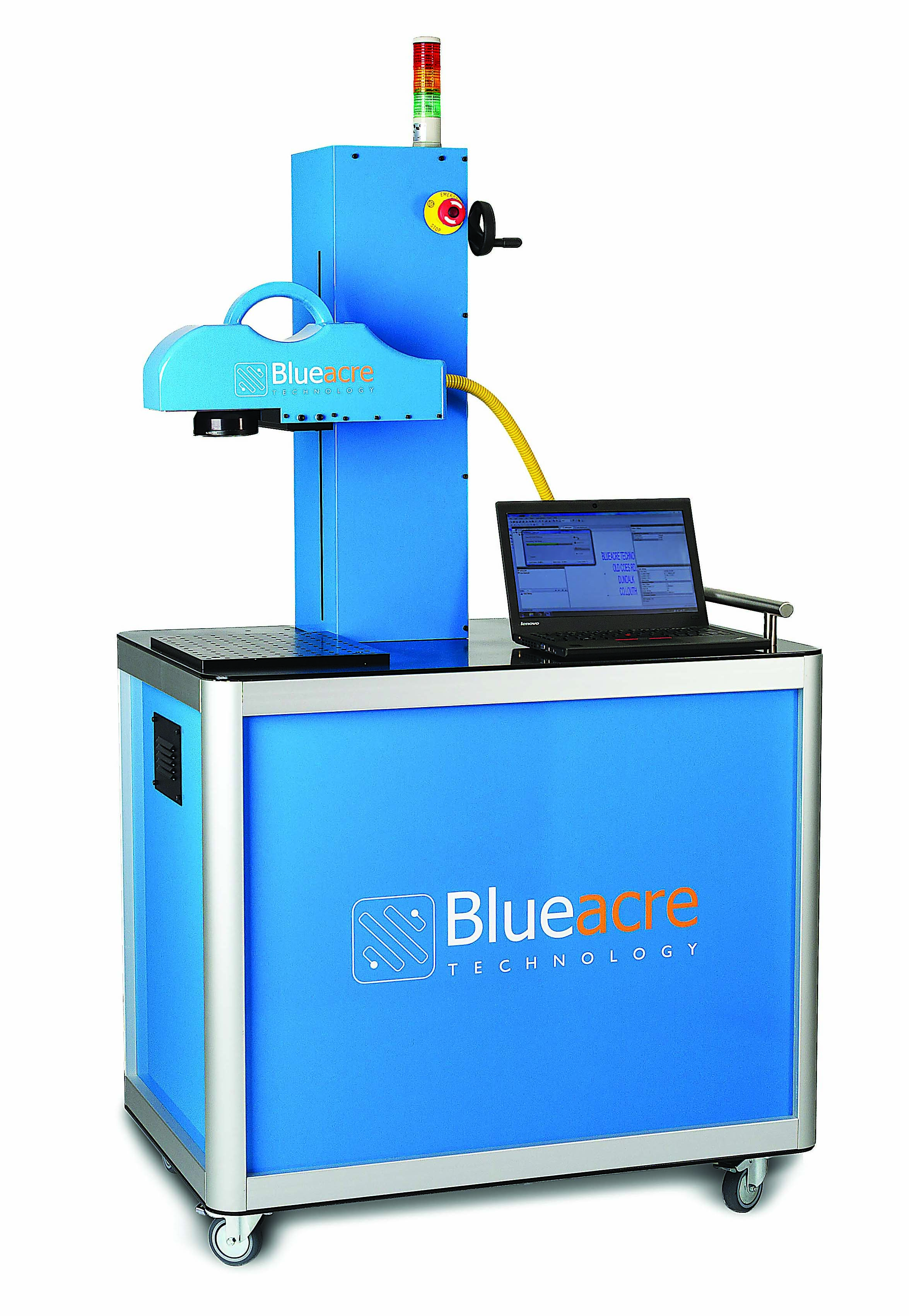 Some Blueacre models can be operated manually or with an integrated motion control. Image courtesy of Blueacre Technology.

“There’s a very durable, hot-dipped coating on each of the pieces that must be removed before welding,” Shiner said. “However, the engineers don’t want to ablate the surface down to the base metal. Instead, they want to leave a thin interface layer to prevent corrosion and eliminate any porosity in the weld.”

Shiner said it’s a delicate application from the standpoint that the operator needs good beam control. The ablation layer must be uniform across the entire target surface to avoid reaching the base metal in one area before properly cleaning the adjacent surfaces.

Putting On the “Top Hat”

The beam profile of a fiber laser can be optimized for exactly this type of work by adjusting it so it has a top-hat shape, according to Shiner.

The laser beam size and shape can likewise be tuned to allow large areas to be covered quickly. This is done by widening the beam so it is several inches across. Small areas can be addressed by narrowing the beam to a pencil-thin circle—or even a square shape.

“Fiber lets you dial in the beam to whatever’s needed for the job, providing the most efficient use of the laser’s power,” Shiner said. 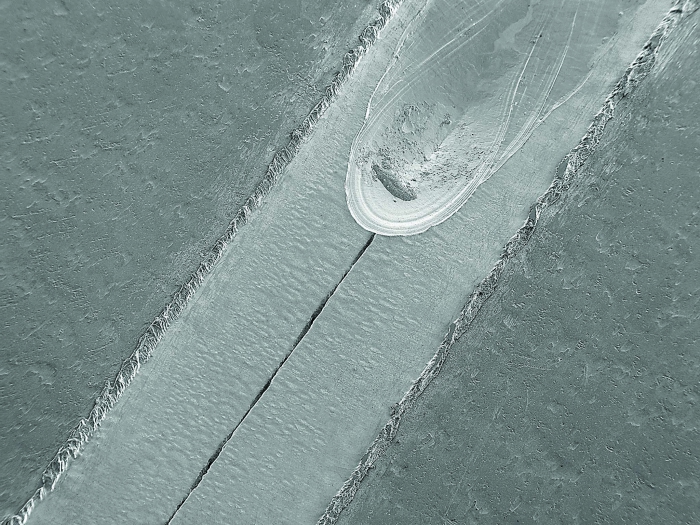 Welding of steel after ablation of aluminum silicone coating. Image courtesy of Trumpf.

Another automotive application for lasers is removing oxide from instrument panels that are assembled by joining together mating aluminum pieces. Lasers also are used to remove an anodized layer on the panels before an electronic component is soldered on.

The military uses laser cleaning to strip aircraft paint without touching the primer layer, and production fabricators employ lasers to remove oil and scale before welding.

“We can analyze most any application and provide a ‘recipe’ that combines beam power, profile and speed to deliver very repeatable results,” Shiner said, adding that this recipe often eliminates the need for abrasives and toxic chemicals.

Any contaminants on the workpiece are instantly vaporized, so it’s a safer process for the worker and better for the environment. And it’s typically much faster than conventional techniques.