Calibrating a multiple-axis machining center is one of those time-consuming but necessary tasks that parts makers have to accept. After paying for all of that machine precision, doing anything else wouldn’t make sense. Manufacturers are required to consider all error sources from the machines producing parts—angular errors as well as linear and straightness errors.

The task has gotten easier in past years, however, and has just gotten easier yet. Renishaw reports that its new XM-60 multiaxis calibrator is able to measure all six degrees of freedom from a single setup, in any orientation for linear axes. The company also says the calibration is simple to use and saves times compared to conventional laser measurement techniques. 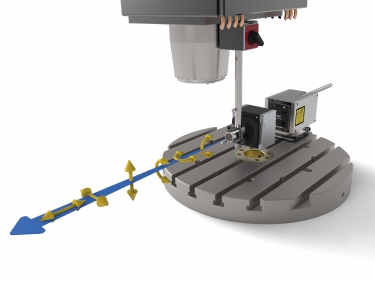 The XM-60 measures six degrees of freedom with a compact launch unit that’s remote
from the laser unit, reducing heat effects at the point of measurement. Image courtesy of Renishaw

Designed for the machine tool market, the XM-60 calibrator provides a highly accurate laser system that incorporates novel technology with a patented optical roll-measurement and fiber-optic launch system. The compact launch unit is remote from the laser unit, reducing heat effects at the point of measurement. It can be mounted directly to the machine, on its side, upside down and even on its back, which is particularly beneficial for difficult-to-access areas of the machine. The calibrator also works with the company’s XC-80 environmental compensator to correct for environmental conditions.

Reducing measurement uncertainties is paramount for any user. The Renishaw XM-60 measures machine errors directly, reducing the inaccuracies that can result from the complex mathematics required for some alternative measurement techniques. Direct measurement makes comparison before and after machine adjustments a quick and simple task for users who have existing part programs for XL-80 measurement. The receiver is fully wireless and powered by rechargeable batteries, avoiding trailing cables during machine moves that could cause inaccuracies or break the laser beam during
measurement.