A provider of laser-based technology has rolled out the first of a line of machines aimed at meeting exacting material processing standards.

Developed by Coherent Inc., Santa Clara, California, the ExactCut laser micromachining system is for machining metals, such as titanium, copper, brass, gold and silver, as well as hard, brittle materials like ceramics, sapphire and PCD. The machine can cut complex geometries and produce excellent edge quality with little post-processing, according to Coherent.

Measuring 1,900mm long × 2,200mm wide × 2,130mm high, the compact system features a pulsed fiber laser with high peak power and pulse energy. Built on a stable granite base, ExactCut’s axis module can come with as many as five axes: standard X, Y and Z axes and optional A and B axes. The module offers positioning and repeatability accuracy of ±0.002mm and ±0.001mm, respectively, Coherent reports. 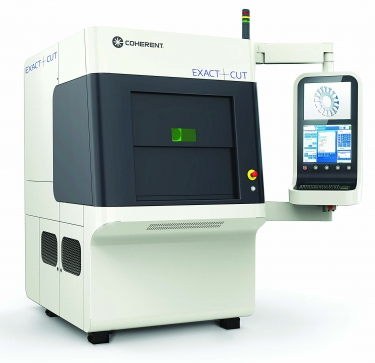 To simplify setup, the machine ships with preprogrammed process parameters. For example, “you can choose parameters for stainless steel and cutting thickness,” said Thomas Schreiner, ExactCut product line manager for Coherent Munich GmbH & Co. KG, Gilching, Germany. “So you don’t have to know which parameters you need. If you are a job shop and are often changing parts, it’s easy for you to set up a new program.”

With the system’s post-processing software, end users just put in a part drawing and quickly generate the CNC code for the laser system, he added.

This capability is particularly valuable in facilitating rapid changeovers for short or prototype production runs. “With mass production, it’s not that important,” Schreiner said. “Once you load the recipe for the part, you can run for days. But when you often change parts, our system is so easy that you can quickly create new recipes for different parts.”

Schreiner added, however, that ExactCut is also suitable for easy integration into high-volume production. The system includes a variety of interfaces for equipment, such as conveyor belts, rotary and linear stages, and part-handling robotics. In addition, the software allows connecting to manufacturing execution systems and other factory programs.

ExactCut is for demanding applications in the horology, electronics, automotive and medical device industries. Part examples include spectacle frames and watch hands and gears. When making gear teeth, “you don’t want to have a heat-affected zone that changes the structure of the material and maybe breaks it,” Schreiner said. ExactCut’s high axis acceleration (1G maximum) is crucial in limiting the impact of heat, especially on part edges, he noted.

In gear manufacturing, the laser system has drilled holes as small as 0.025mm in diameter, he said, and it has cut metal sheets just 100µm thick in the production of stents.

As for limitations, the fiber laser can’t cut materials thicker than 3mm, Schreiner said. In addition, the size of parts ExactCut can work on is limited by its maximum axis travel: 500mm×400mm×200mm in the X, Y and Z directions, respectively. It also is specifically for industrial environments and is not suitable for use in clean rooms.

For manufacturers of small, thin parts in industrial settings, however, Coherent hopes ExactCut is exactly what they’re looking for. 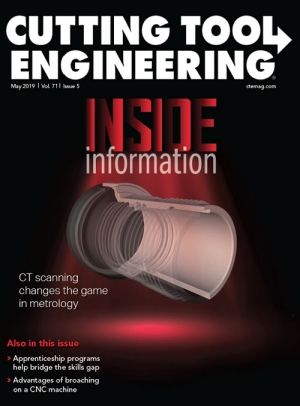