Dear Doc: We grind mostly carbide but occasionally have to grind cermets. They’re killing us. Why? And is there something we can do?

The Doc replies: Both carbide and cermets are ground with diamond wheels. Both materials load/clog the wheel. But here’s the difference: Cermet dulls the diamond grits. Carbide doesn’t. And that dulling effect is a killer.

Why do cermets dull the wheel? Because they contain hard particulates — SiC, Al2O3, TiC, TiN, etc. — that are close to the hardness of the diamond. Tungsten carbide, albeit hard, is not hard enough to dull the diamond. Sticking the wheel reduces loading in both cermets and tungsten carbide, but it doesn’t sharpen dull diamonds.

Therefore, we need those diamonds to fracture while grinding. Here’s how to do it: 1) Use smaller grits. You’ll find that 150 mesh is too large, so 250 mesh or even 320 mesh is better. 2) Use friable (not tough) grits. You’ll have to talk to your wheel supplier about this. 3) Grind aggressively using faster feed rates and/or slower wheel speeds.

Here’s the biggest mistake made with cermets: As soon as problems arise, people slow down the feed rate. That means that the diamonds are no longer penetrating deep into the workpiece — they’re just tickling the surface. The diamonds don’t self-sharpen; they just dull.

The worst case I’ve seen was a cermet-tipped saw blade manufacturer using 150-mesh diamond. In an attempt to cope with the difficulty of grinding cermet, the company kept slowing down the feed rate — eventually arriving at a pathetic Q-prime of 0.05 mm2/s. (A respectable value would be Q-prime = 0.5 mm2/s.) What specific energy was obtained? SE = 1,604 J/mm3. If you have to slow something down, slow down the wheel speed, not the feed rate.

Cermets will never be as easy to grind as carbide. But follow these three rules and you’ll be able to grind them reasonably well.

Sparks are simply hot chips coming off the grinding zone and oxidizing in the atmosphere. In a sense, they’re metal burning in the air. And things that burn give off heat and light — that is, sparks.

If you have good cooling, you quench those sparks before they have a chance to burn in the atmosphere. But does that mean you didn’t burn the workpiece? No way. Maybe you did, maybe you didn’t. But judging that based on the sparks is a risky venture. 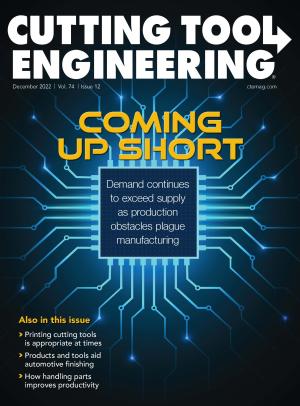