Quoting a big order and need to figure out the cycle time? Forget the cocktail napkins, close down the Excel spreadsheets, and don’t waste programming and machine time on a dry run. Instead, turn to cost-estimating software, which generates consistent and accurate pricing, prevents embarrassing misquotes and aids in keeping a bottom line firmly in the black.

Nonetheless, many shops don’t use it. According to David LaJoie, vice president of sales and marketing at estimating software developer MTI Systems Inc., West Springfield, Mass., the estimating software market offers a lot of opportunity for a company like his; the challenge has long been getting shops to try the software. “We’ve been around for 34 years and have a little over 1,700 customers. That’s a respectable number, but there are still tens of thousands of manufacturers with no systemic approach to cost estimating,” LaJoie said. 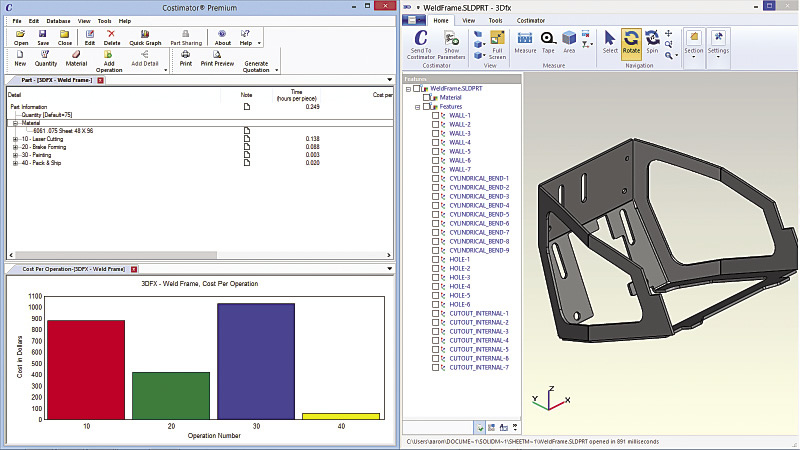 Shop owners and production managers will insist there’s no software system in the world that compares to decades of manufacturing experience. Maybe so, but few would argue that a computer relying on a database to calculate material-removal rates, tool-change and machine-idle times, rapid-traverse distances, part loading and unloading, employee breaks and overall efficiency factors is inherently more accurate than a human being.

“Give an RFQ [request for quote] to five different people and you’ll get five different answers,” LaJoie said. “It doesn’t matter how experienced they are, there will be inconsistencies and occasional mistakes. And once you’ve submitted that quote to your customer, it’s awfully hard to go back and say you messed it up. Estimating software eliminates that possibility.”

Parts manufacturers also need to consider quoting efficiency. Software is much faster than humans, unless someone is making an educated guess, a common practice in many small shops. This quoting method becomes increasingly unacceptable as companies grow, however, especially when working with OEMs, which typically ask for transparency in the RFQ process. “Many suppliers are asked the question, ‘How did you come up with your numbers?’ Unless you have accurate and readily available data to support the quote, chances are good you’ll be off the supplier list.”

But those with a quoting module in their enterprise resource planning system might question the need for another software package. Sure, give ERP raw material costs and cycle time, labor and burden rates and it spits out a pretty quote form for a customer. The question is, where did that cycle time come from?

Micro Estimating Systems Inc., Brookfield, Wis., is another successful developer of cost-estimating software. CEO Bernard Woods said he is equally mystified about the lack of robust estimating tools at most shops.

“We compete against Excel,” he said. “That’s what everybody’s using. I don’t know why, but I suspect it’s habit or maybe fear of change. If they’re successful and the shop’s running well, then they’re not motivated to change. The bottom line is something the founder of our company once said, ‘High estimates miss opportunities, low estimates lose money.’ ”

Without accurate quotes, shops slowly gain loser jobs, while the ones that make money go elsewhere. LaJoie and Woods agreed that implementation of a cost-estimating system is not a huge task like it is with an ERP system, taking weeks rather than months or years. Training takes a few days, and most estimating systems come preloaded with material, machine tool and feed and speed information—all that’s needed is some tweaking to match each shop’s way of operating.

Once operational, cost estimating brings more to the table than quick, accurate quotes—it brings greater organization to the entire process.

“Last year we sold a system to a job shop in Detroit,” Woods said. “They had four guys doing estimates with around 300 open quotes at any given time. Nobody knew where anything was or what they were waiting for, so they ended up losing orders just because they couldn’t keep track of things. So setting aside the primary benefits of a good estimating system, namely accuracy and consistency, it greatly improved their customer service levels.”