Cryogenics freezes materials to temperatures down to -300° F and lower to transform a material’s crystalline microstructure and enhance the material. Reported improvements include increasing hardness and wear resistance, relieving residual stress, precipitating eta-carbides in steels for increased resistance to wear and stabilizing the material, including tool steels, carbide and copper. 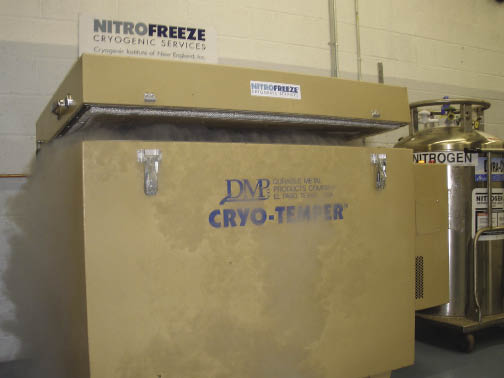 The company needed to expand its capability to run two processes simultaneously while enhancing temperature-ramp precision to meet customers’ most advanced cryogenic thermal cycling profiles, or process parameters. For example, a part might need to be frozen to -300° F at a rate of 1°/min., held for 24 hours at that temperature, brought back to room temperature at that same rate, post-tempered at 300° F for an hour to solidify the cryogenic transformations, and then returned to room temperature.

After talking to others in the industry at a trade show about the equipment being used, Cryogenic Institute of New England decided to acquire a Cryo-Temper unit, which is produced by Durable Metal Products Co., El Paso, Texas. “Surprisingly, we ended up finding this system on eBay,” Taylor said. After purchasing it, the company sent the 7-year-old piece of equipment to DMP for refurbishment.

Unlike the company’s other cryogenic system from another manufacturer, the Cryo-Temper unit is able to freeze and heat parts in the same chamber, which has a temperature range from -310° F to 500° F. That avoids the need to transfer parts to an oven for heat treating. Taylor noted that aluminum parts are typically held at 275° F for an hour, whereas steel ones are held at 300° F for an hour. “For some defense applications, we’ve gone as high as 400° F,” he said.

Another advantage compared to the company’s other system is steel parts do not need to be coated in a rust-preventative oil prior to cryogenic treatment because the Cryo-Temper’s heating element induces heat in the chamber during the warm-up cycle from deep freeze and avoids potential condensation. And because those parts don’t need to be oiled, they don’t require cleaning in a parts washer between the freezing and heating cycles; oiled parts cannot be heated in an oven.

Oiling parts for one cryogenic cycle can take 1 or 2 hours, depending on their size and complexity, Taylor noted. He estimated the company saves $100 to $150 per cycle by eliminating the costs for labor, oil and parts washing chemicals.

“The process now involves two fewer steps, and we pass the savings on to our customers,” said Bryce Trani, the company’s director of operations.

Although Taylor noted that data logging is more complex on the Cryo-Temper than the other system, the advantages of the new system clearly outweigh that. “The bottom line is, our customers will be the primary beneficiaries of the system acquisition. They will now be better served through lower costs and enhanced profile parameters,” he said.