Two cheers for hydraulic systems used to position, support and clamp parts for machining operations. In many applications, these workholding systems — which include hydraulic lines, pumps, cylinders and valves — offer significant advantages over manual and pneumatic workholding. In addition, hydraulic workholding is a good fit for shops that have automated their processes or are interested in doing so.

But hydraulic workholding doesn’t merit a third cheer because there are reasons not to choose it in certain situations. What’s more, inherent downsides of hydraulics eventually may cause it to be completely eclipsed as a workholding option.

“If you have a high-density fixture, you have to manually tighten all the bolts on there,” he said. “If (the operator) accidentally misses one, you might have to scrap a part or even damage the machine. But if you have a hydraulic actuator pulling the bolt, you’re not relying on an operator. As soon as you push a button to actuate it, all the clamps are going to pull at the same time and every single bolt will get tightened with an equal pressure.”

By contrast, results can vary greatly when clamping operations rely on an operator with a torque wrench.

“I’ve been taught that you normally get about 30% scattering in the forces that are generated by an operator with a torque wrench, and it can change from operator to operator, whereas with hydraulic workholding, (the process is) very precise,” said Chuck Milam, sales engineer at Minneapolis-based Kurt Workholding.

On the downside, he pointed out that hydraulic workholding can be quite a bit more expensive than a manual system, depending on the type of hydraulic circuit required for an application. And since some kind of hydraulic plumbing always is needed, users must monitor hydraulic pressures and make sure there’s no air in the lines.

Moreover, in a worst-case scenario, Milam said a hydraulic failure is “very messy.”

Hydraulic workholding also has disadvantages compared with pneumatic systems. In addition to being quicker than hydraulics, Milam said pneumatic systems are easier to move and more
economical.

“With hydraulics, you’re dealing with much higher pressure, so you have to have tubing, hoses and fittings that are very highly rated,” he said.

On the other hand, Milam noted that the higher pressures generated by hydraulic systems are advantageous because they allow the use of smaller pistons to actuate the workholding device. This means that hydraulic systems take up less space than pneumatics to produce a given amount of clamp force.

In fact, “the size of the (pneumatic) clamp necessary to output the same amount of force (as hydraulics) becomes pretty large because typically you’re running at 80 to 100 psi air pressure,” Damman said. “Then you don’t have that advantage of high pressure in a smaller package.”

Hydraulic workholding can work with any machine, but Damman said it’s most commonly used with horizontal machines in high-volume production. Although in most cases it wouldn’t make sense for low-volume machining because of the upfront cost, he noted that manufacturers in industries like aerospace use hydraulic workholding to produce small numbers of parts when high-precision clamping is necessary.

Milam said hydraulic workholding is also a good fit in automation setups, working in conjunction with a robot.

“When I first started quoting and designing hydraulic circuits for automation 20 years ago, it was pretty expensive,” he said. “But the price has really come down, and it’s much easier to set up.”

On the other hand, hydraulic workholding may not be an option at facilities where fluid flammability is a major concern. In addition, hydraulics could be unsuitable for the production of medical instruments and implants.

Shops making products that go inside the human body “want as little contamination to enter the manufacturing process as possible,” said Larry Robbins, president of the commercial division of SMW-Autoblok Corp., a workholding
manufacturer in Wheeling, Illinois.

In these settings, he said pneumatic workholding is often the choice.

Wherever hydraulic workholding is used, Robbins recommends that hydraulic sumps be cleaned out on a regular basis to keep the fluid free of chips and other contaminants. He also advises users to perform regular visual inspections and preventive maintenance. This should include taking apart the chuck every couple of thousand hours and replacing internal components that show signs of excessive wear.

“We have customers with product that’s 35 years old and still hold tenths with that product because they do their preventive maintenance,” he said.

Another best practice for users of hydraulic workholding is checking to see if air is in the lines — and taking steps to keep it out. Milam pointed out that air in a hydraulic line causes the pressure to vary, so the pressure gauge of the system should be checked regularly.

Additionally, he recommends that the hydraulic pump be positioned above the workholding.

“I’ve seen shops build a little platform (near) their machine tool and put the pump up high,” Milam said.

He explained that since air naturally rises, this will cause any air bubbles in the line to rise into the hydraulic oil reservoir.

Besides following best practices, shops interested in getting the most out of hydraulic workholding may want to take advantage of the latest developments in the technology. For example, Vektek recently came out with what the company calls high-capacity work supports, which are designed to hold higher clamping loads than comparable older versions of the products but with similarly sized units. For instance, Damman said an older Vektek work support with a 25.4 mm (1") dia. thread can hold 453.6 kg (1,000 lbs.) at 5,000 psi, but the new version of the same size can hold double that at the identical pressure.

In addition, Robbins reports that many of the newer hydraulic workholding products made by SMW-Autoblok are sealed hermetically, which he said allows them to operate for thousands of hours without maintenance, whereas maintenance intervals before were only eight to 10 hours. This sealing keeps contaminants, such as coolant, swarf and chips, out of the chuck, he noted, dramatically reducing wear of internal components.

Another development at SMW-Autoblok is the introduction of a hydraulic chuck-switching system. It includes a back end that stays the same and a changeable front end that enables users to switch among a three-jaw chuck, four-jaw chuck, mandrel and collet. He said it also offers 10 µm (0.0004") positional repeatability.

While hydraulic workholding is common in the machining industry, Robbins sees a trend toward less hydraulic capacity in machines coming on the market. The reasons, he said, include the high cost of producing hydraulic power and the fact that hydraulic fluid used in machining operations eventually becomes hazardous waste. So to provide the best workholding solutions for some applications, SMW-
Autoblok sometimes has to supply customers with auxiliary power units that increase the hydraulic capacity and pressure of systems.

With hydraulic capacity on the wane in the industry, the company also is preparing for a future in which hydraulic workholding is displaced by mechanical devices that are actuated electrically. He said a large part of SMW-Autoblok’s booth at the International Manufacturing Technology Show will be used to introduce this type of workholding technology. It uses an electrical unit to send signals to a receiving unit mounted on the back of a chuck. These signals go to little drive motors in the jaws, allowing users to control jaw movement.

Besides banishing problems associated with hydraulics from the process, Robbins said this hybrid mechanical-electrical technology offers more than hydraulic systems to users.

“It gives you the ability to have full control and get full reporting of statistics from your specific application,” he said.

Among other things, Robbins said, the technology will provide machine users with information on jaw position, clamping pressure, spindle rotation, torque and temperature, as well as allow people to increase or decrease clamping force based on the other readings.

Although he believes that this new technology eventually will replace hydraulic systems, he thinks that hydraulic workholding still has decades of life ahead of it. 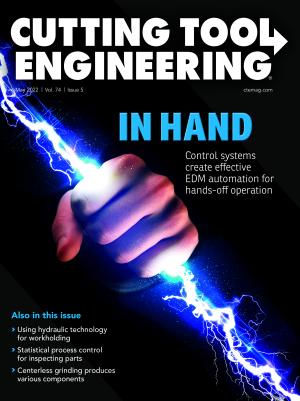