Rivets aren’t sexy like jet engines and flight control systems, but that doesn’t make rivets less important to the well-being of an aircraft. For example, a Boeing 747 has nearly 1.5 million such fasteners, all of which contribute to structural integrity.

Some newer planes, such as the Boeing 787 Dreamliner, require far fewer rivets and screws due to enhanced use of lightweight composite materials. Nonetheless, each fastener must be held firmly in place for an aircraft to be deemed flightworthy. Even a spacecraft, which is expected to endure the extreme speeds and temperatures of interplanetary travel, is fastened together with rivets not all that different from those found on a fishing boat or recreational vehicle.

The most common method of countersinking in  aerospace applications is with a spring-loaded microstop.  Image courtesy of OSG USA

A large percentage of these fasteners still are installed manually.

“Several methodologies exist, but the most prevalent is the use of a power drill and spring-loaded microstop, also known as a microcage,” said Linn Win, senior business development manager at OSG USA Inc., Irving, Texas. “The cutting tool itself is typically a piloted 100° or 130° countersink with a threaded shank that screws into the microstop. You set it to the desired depth, place the tool’s pilot into a pre-drilled hole, engage the drill motor and then push down to produce the countersink.”

He described a few methods that are more productive. One is to use a semi-automated drilling unit, which can drill and countersink in a single-shot operation. Also, robotic and fully automated systems not only accurately countersink a hole but install a rivet, commonly known as drill and fill.

Whatever the method, a backing bar or similar type of support — usually placed on the inside of an aircraft — often is needed to keep aircraft skin from deflecting during drilling. In other instances, two or more sections of material may need to be disassembled, cleaned, deburred and then reassembled before rivet installation. Compared with chamfering a hole in a machined part, countersinking fasteners on an aircraft fuselage is complex work.

These operations are made even more complex by the fact that aircraft-makers use a wide range of materials to construct their wares. The all-aluminum skins of yesteryear slowly are being eliminated in favor of composite sandwiches that in some applications include titanium, creating challenges for cutting tool manufacturers.

In addition, each aerospace OEM has its own fit requirements for fasteners, which might vary from plane to plane or even from one specific area to another in an individual aircraft. 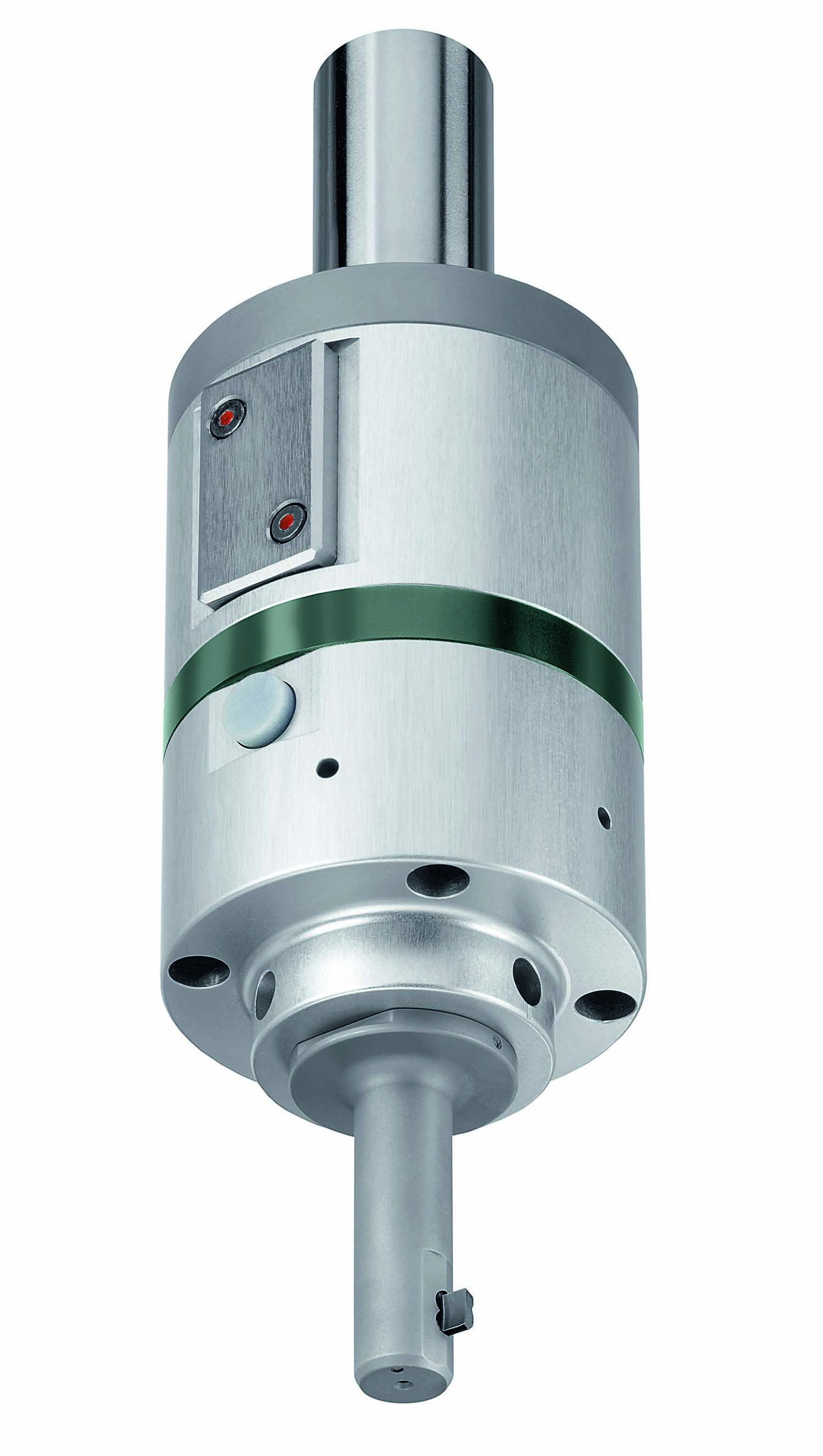 The Solo tool has a retractable, spring-loaded bladeto countersink or counterbore the back of a hole. Image courtesy of Heule Tool

“The requirements vary greatly based on the size of the plane, the load and stress of a mating section and the manufacturer,” Win said. “Cutting tool manufacturers must therefore deal with a broad range of materials and thicknesses, hole sizes, countersink shapes and depths, as well as different methods of fastener installation and hole prep, making it difficult to standardize cutting tools. Because of this variability, countersinking tools must often be customized to the fastener and its unique application.”

It’s niche work to be sure. But due to the large volume of aircraft being made, never mind the number of countersunk holes in each one, there’s no shortage of high-quality custom and off-the-shelf cutting tools. One example of the latter comes from Heule Tool Corp., Loveland, Ohio. President Gary Brown said the company’s Comp combination countersinking and holemaking tools automatically compensate for the uneven surfaces found on many aircraft parts.

“The surfaces on these parts can vary by a quarter inch (6.35 mm) or more in height, so you need a tool that can float up and down while remaining perfectly perpendicular,” he said. “Our Comp tools are used on the doors for the 737, for instance, each of which has around 800 fasteners. But we also see a lot of demand from turbine manufacturers who need to chamfer both sides of a hole. For this, our Defa tools are a popular option, or the Solo, which has a retractable, spring-loaded blade. One of our largest customers uses these in an automated machine to put 100° countersinks on engine fairings.”

Automation is increasingly prevalent in aircraft manufacturing, Brown said. System providers continue to develop ways to streamline the holemaking process, using robots and tracked “crawlers” to reduce the need for humans in what has long been the most labor-intensive step of fuselage production.

“You have companies like Boeing and Airbus employing 40,000 workers with air guns to deburr and chamfer and countersink millions upon millions of holes each year,” he said. “So it’s only logical that they want to automate this wherever possible, not only to reduce costs but, more importantly, to improve product quality.”

Automated or not, the array of materials found in aircraft challenge cutting tool and aircraft manufacturers alike. A diamond-tipped countersink that does a splendid job on composites may self-destruct upon striking a titanium underlayment while HSS tools commonly used in manual applications can provide shorter tool life in either of those materials.

The most general-purpose of all cutting tool materials is tungsten carbide, which is suitable for machining aluminum, titanium and even composites, especially when coated with TiN or diamondlike carbon. Even here, though, fuselage machining is typically performed in less than optimal machining conditions that tend to compromise tool life and productivity.

“A lot of aircraft manufacturers might use mist coolant or, more often, no coolant at all,” Brown said. “And as anyone who uses cutting tools knows, that’s not ideal. With thinner materials like wing skins, this isn’t such a big deal, but it can be challenging with the structural components or when you get into titanium. Here’s where a good tool coating can make a big difference.”

Gary Rozema, vice president of sales at Amamco Tool & Supply Co. Inc., Duncan, South Carolina, said PCD is the preferred choice for countersinking composite components. That’s because PCD tools generally hold their sharp ground cutting edges longer than tools made of other materials thanks to PCD’s molecular structure and its ability to withstand heat in the cutting zone. Therefore, PCD tools cut cleaner and with less delamination, which are important considerations when cutting any composite.

Tool geometry is also a factor when prepping a rivet hole. He said some fasteners — Hi-Loks, for example — call for a slight radius at the transition point where a drill meets a countersink. This creates a relief that reduces stress on a fastener, hopefully eliminating the possibility of its head popping off in flight.

“This is less of a concern on composite structures as these provide a little more give than with a metal-on-metal connection,” Rozema said. “In either instance, however, the radius also helps assure that the head will sit perfectly flush with the fuselage surface, something that’s crucial to its laminar flow.”

Dan Thurnau, applications engineer for Amamco Tool & Supply, works with aerospace customers around Wichita, Kansas. He agrees with Win that most cutting tools used to make fastener holes are specials.

“Easily 90% of our stuff is application-specific, which is why it’s so important to develop relationships with the engineers at these companies,” Thurnau said. “That way, we can understand their specifications and what they’re trying to accomplish. We also have the ability to test these solutions in our own lab if the customer so desires, using their material and fasteners. This allows us to fine-tune the tool geometry and coatings and develop the best possible solution for their requirements.” 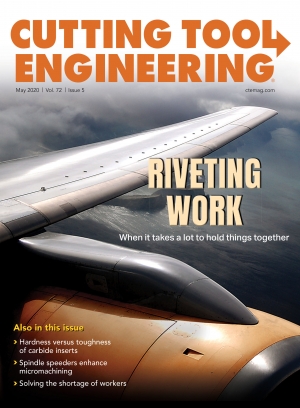