“At least 90% of the time, catalog toolholders typically in the range of 2" to 6" or 8" are more than long enough to overcome these minimum strokes, dead zones or any other problems with machine limits,” Burley said. “It gets down to 10% of the problems—where either the parts are just so small or so close to the table or it’s on a horizontal where you have to reach across to the opposite side because of the feature that you’re trying to get to—where you need extended-reach toolholders.” 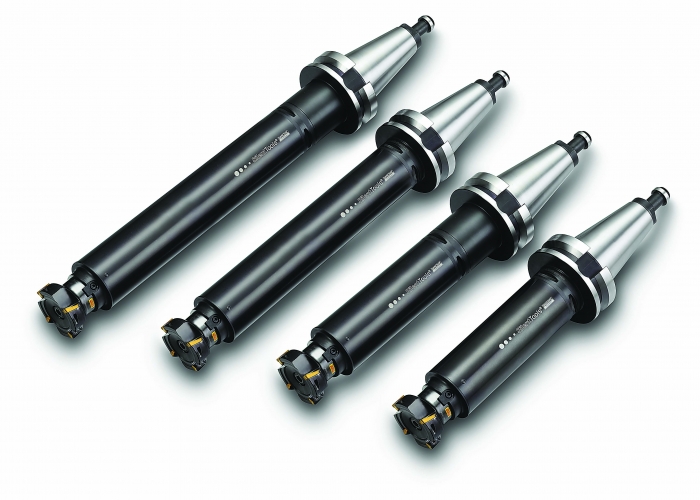 All the recent investment in multiple-axis machines, with their increased accessibility to workpieces, has made many people believe that the need for extended-reach toolholders is greatly reduced if not eliminated.

“With the 5-axis, I can tilt things around to get into those places using a standard toolholder, but you’re always working off the center of the table,” Burley said. “So everywhere around it, there are going to be certain tilts that make it difficult to reach, like the B-axis all the way at 90° to the spindle, and some features down by the table itself.”

For situations like those, he thinks that extended-length toolholders always will be needed.

CAM software tells a programmer the maximum and minimum gauge length from the spindle to the tip of the tool, Burley said. To determine other toolholder dimensions, a program’s collision detection system would calculate the maximum outside diameter of the toolholder and the optimum lengths to reach the longest conditions.

But what exactly makes a toolholder qualify as extended reach?

“Extended reach is not just how long it is but how long it is in relation to the tool diameter,” said Gregg Bishop, general manager of Ultra-Dex USA, Flushing, Michigan.

He considers extended reach to be any toolholder longer than five to seven times the diameter.

“It’s important that we keep those two things related,” he said. “So if we’re talking about 14" of reach and the tool diameter is only ½", we have a ratio of 28 times the diameter. But a 2"-dia. tool at 14" length is only a 7-1 ratio, which is not particularly extended length.”

Bishop said customers typically use extended-length holders to reach past fixtures, obstructions or part features to machine other part features beyond. For those applications, he recommends keeping cutting forces light to minimize radial or axial radial deflection.

“The cutting tool chosen could be more positive or high shearing,” he said. “Or we can apply toolpaths, such as high-efficiency or high-feed milling, which are different approaches to speeds and feeds and depth of cut.”

Trochoidal milling, a form of high-efficiency milling, is one option for extended-length toolholders because it exerts less stress on the spindle.

“The idea for a 1"-wide slot is to use a smaller-diameter cutting tool, like a ½" milling cutter instead of a 1" cutter, and then feed the cutter forward in a circular toolpath opening the slot to the 1" width instead of creating it with one big hog pass that’s 1" wide,” said Mark Backus, product specialist for machine integration and tooling systems at Sandvik Coromant Co., Fair Lawn, New Jersey.

The main challenge with extended-reach toolholders is achieving suitable rigidity. The longer and thinner the holder, the more likely that bending forces will cause runout.

“The tool steel itself, along with the Rockwell hardness of the tool steel and the substrate, all relate to the rigidity of the tool assembly,” Bishop said. “Let’s say you try to reach something out 12". You’ve got to start with good runout, and a shrink-fit holder is the smartest choice for that application. Instead of having a toolholder with setscrews on the side of it that pushes a tool one direction or the other, a shrink-fit holder actually wraps right around it, giving you the optimal runout, which is below a tenth.”

As an option to a single-piece, extended-length holder, several companies offer modular systems that can be built to longer lengths as needed.

“We can build specials beyond the normal catalog size or range, which is usually after 8" or 6" on smaller-taper tools,” Burley said. “But my preference is to direct people toward our CKB line of modular mill/turn tools for mill/turn centers.” 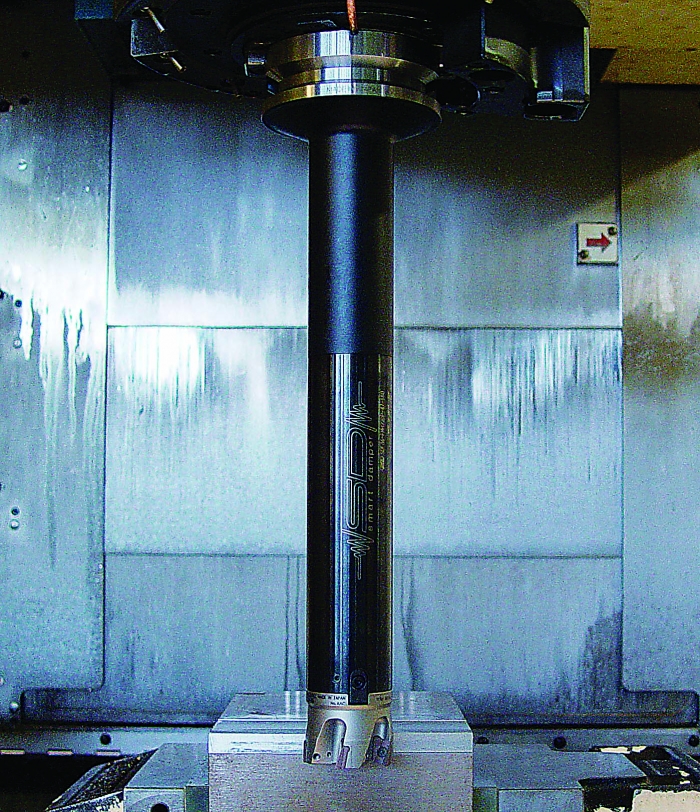 The advantage of the modular concept, according to Burley, is that there are hundreds of different components that can be assembled together. A CAD/CAM programmer can choose from these to create the optimal tool configuration to fit into the reach and meet the needs of the program.

“It’s kind of like Legos where you start with a basic holder and you can extend it and taper it and do all kinds of things to make it the way you want it to look using standard components,” Burley said. “And the beauty of that is, because you’re using a pool of common components, you can take it apart whenever the job is over and reuse the parts for other builds.”

A modular system normally consists of basic holders with extensions, reductions and toolholder components that fit into them, such as shell mill, collet chuck or endmill holders.

Coromant Capto by Sandvik is another modular system that can be used to create extended-length toolholders. “You can use a Coromant Capto adapter on the machine spindle side and then put different types of milling cutters, drills or boring heads on the machining side of the assembly end of the adapter,” Backus said. “You can add more extensions to make it longer and stack them out as far as you need. On the same tool assembly, you can have different diameters, which gives you a lot of versatility. You usually would start with a larger diameter at the base and then reduce it to whatever you need or just keep it all the same diameter for the entire assembly.”

Of course, modular toolholders bring their own challenges.

“You will sacrifice a little bit of accuracy when you start building up these components, but they’re designed in such a way as to remove the inaccuracy of each connection,” Burley said. “We’ve actually stacked together four or five parts and measured the (total indicator runout) at almost 12" and seen runouts that are less than 0.0005", which is extremely good for any tool.”

Customers also may worry that a modular toolholder is not as rigid as a single-piece one.

“It’s not as good as a solid tool,” Burley said. “But in some situations, because I can build it based on the configuration that I want, I can make it stiffer and larger than a 12" standard holder that is long and slender.”

That scenario is where the versatility of a modular toolholder comes in handy.

“If you’ve got to go around the side of a workpiece but the first 6" is in the dead zone, then we’re going to make that zone as beefy as we can,” Burley said. “Compared to a one-piece holder of exactly the same length and the same exact shape, the rigidity wouldn’t be as good as the solid tool, but I would put it within about 10% of the same range.”

“The further the overhang of the tool assembly, the more vibration will be introduced,” Backus said. “If they’re taking a light cut with a milling cutter or they’re drilling, they may get by with a pretty long assembly. But if they’re doing a heavier cut with the milling cutter, they need something like our Silent Tools milling adapter to dampen the vibration.”

Anti-vibration technologies typically are based on a damping mass, which is often a heavy metal, a fluid or both inside a holder to offset vibrations.

“In many cases,” Backus said, “with our vibration-damping toolholders for turning, boring or milling, it can be a great productivity booster without needing to make reductions to the cutting data.”

With an extended-reach toolholder, end users must contend with physics. Due to bending forces and frequencies, a 12"-long tool never can run as fast or hard as a 2"-long tool, Burley said.

“Every tool system and spindle has a natural frequency,” he said. “And when you run a tool that is coincident to that frequency, you get a lot of vibration.”

One way to avoid the problem is to reduce the spindle speed until exiting the coincidence zone.

“But even though the instinct is to slow down when something vibrates, there are certain situations where if you go faster, you also run into a sweet zone that (doesn’t) get the chatter,” Burley said. “And extended-reach toolholders have these bands just as much as the shorter ones. They’re narrower but still exist.”

For example, he said if a 6"-long tool chatters at 2,000 rpm, a 7"-long tool might not because the 6"-long holder at that rpm is coincident to the natural frequency of the system while the 7"-long holder is out of phase. 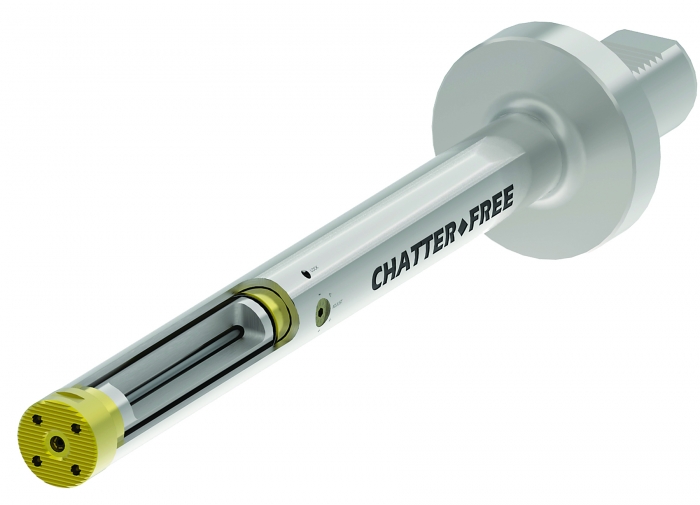 The Need for Extended-Reach Boring Bars

Vibration-damping technologies are for not just longer-length toolholders but boring bars.

“There’s a ton of demand in the oil and gas industry to get much deeper into a bore for ID turning,” said Gregg Bishop of Ultra-Dex USA. “They’re always trying to push that envelope to reach size and finish limits we never thought were possible. Imagine a 40" bore with a standard 4" bar. You can’t do that with a traditional carbide shank boring bar.”

He said oil and gas applications use threads with a high insert engagement, which creates a lot of deflection when cutting, and therefore vibration occurs even at short bar lengths.

In response to demand, Ultra-Dex developed a chatter-free line of boring bars with up to a 14-1 ratio. These long-overhang ratios are made possible by an internal damping technology based on a high-density alloy that provides optimal dynamic stability.

“They can run at higher speeds and feeds versus a plain carbide or steel boring bar with the same hangout ratios,” Bishop said. “It’s a productivity booster, so the (return on investment) on the added cost is found where the customer takes into consideration the increased throughput.” 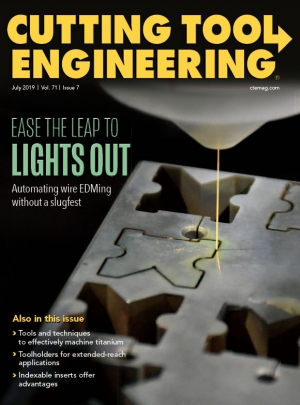