Where is the field of inspection headed and, more importantly, where do the manufacturers that depend on it desire it to head? In 2014, the Coordinate Metrology Society (CMS) combined forces with the University of North Carolina-Charlotte to find out. They applied for and received an Advanced Manufacturing Technology Consortia Grant from the U.S. National Institute of Standards and Technology (NIST) that year and used it to establish a consortium of stakeholders with the mission of fully inspecting inspection itself—from the smallest to the largest applications. 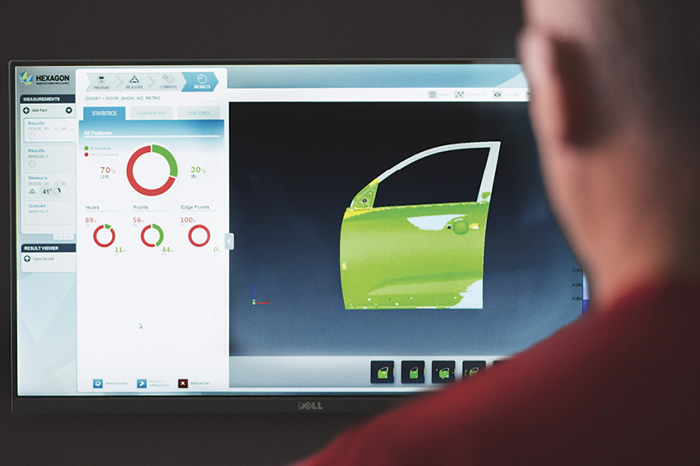 Called the PrecisionPath Consortium for Large-Scale Manufacturing, it is an industry-driven group working to identify and prioritize the technology needs of companies that manufacture small-to-large-scale, high-accuracy parts and products.

Ron Hicks, a founding member of CMS and chair of the new consortium, has never liked the term “large scale” being part of its name. “We are creating a road map to improve all of metrology,” he said. “Many of our members are aerospace OEMs, but they do small-scale inspection as well, and we’re really trying to help the manufacturing industry as a whole, small and large scale.”

When CTE spoke to Hicks in November, the consortium had just met to begin evaluating the results of a survey aimed at discerning the state of inspection technology. “We asked, ‘What kind of coordinate metrology tools are you using most? And what do you see needing to improve?’ ”

Hicks, who is also vice president of services for Automated Precision Inc., Rockville, Md., is the lead writer of a report based on the results, which he expects will be finished and released by summer. In the meantime, he shared some observations based on the data—and on his own years of experience.

“In the past decade, the inspection technology that has improved the most has been laser tracker systems,” he said. “From the survey, we know that they’re the most-used systems as well. Another area that’s seen a lot of improvement is scanning technology—which would be for either large or small parts, obviously—and being able to accurately scan something very quickly and come up with the results instantaneously. We’ve seen a tremendous improvement on both the hardware and software sides.”

The industry has seen improvements in how software can increase versatility and throughput with a number of inspection technologies, according to Hicks.

Mike Provenzano, vision product manager for Nikon Metrology Inc., Brighton, Mich., concurred. “More and more, customers are referring back to 3D CAD models to facilitate the inspection process,” he said. “They not only can compare a part to the model, but also can use information from the 3D model to drive the CNC [inspection] machinery,” which is especially helpful if the part has an irregular shape.

“An example specific to us is our move from the AutoMeasure software platform to the CMM Manager platform” on the Nikon iNexiv vision measuring system, Provenzano continued. The standard AutoMeasure software assumed users were working in a 2D template on an X-Y work plane. AutoMeasure will still be in demand from some users, and for certain visually intensive applications it has advantages. However, CMM Manager has an added dimension.

CMM Manager can import 3D CAD models and pick features to create automatic probe paths. “It can align any part, regardless of part complexity or geometry, for the most efficient inspection and measuring,” Provenzano said. Simulations can be run and inspection results can be verified in real time. And, he added, the more complete the CAD model, the more efficient the inspection process becomes. 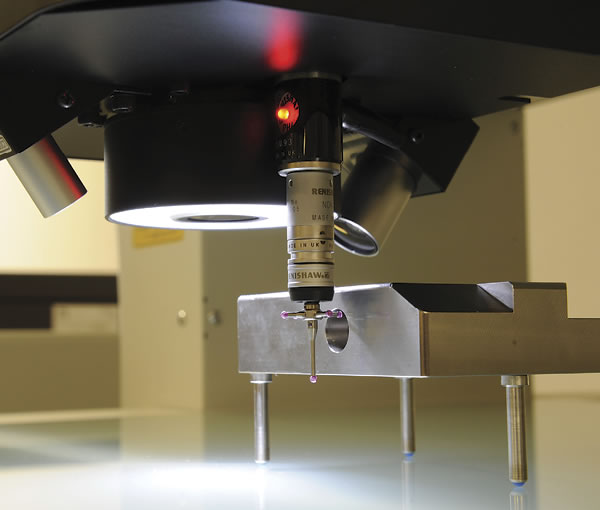 Software capabilities have grown along with hardware. Nikon Metrology’s iNexiv vision measuring system has moved from the 2D-based AutoMeasure platform to the 3D-based CMM Manager platform, which reportedly enables the use of 3D CAD models to improve and expedite the inspection process. Image courtesy Nikon Metrology.

The software was introduced on iNexiv in 2015, but, according to Provenzano, it is still evolving. “We’re up to Version 3.6 now, which includes some video features we’d had available on AutoMeasure but not on CMM Manager—until now,” he said.

CMS’s Hicks said the use of automation to improve quality and throughput continues to grow. “As more companies turn to automation, they’ll want metrology to be part of their work cells and not hold up a manufacturing process,” he said.

Keith Gudeman, business development manager at Hexagon Manufacturing Intelligence, Wixom, Mich., has seen that demand from his customers—and not only from low-mix, high-volume automotive supply-chain companies, which were the earliest adopters. “High-mix, low-volume producers are moving to automation as well—and need inspection to be part of it,” he said.

That demand led to the development of the company’s 360º Flexible Measurement Cell, unveiled at IMTS 2016. The FMC consists of off-the-shelf, work-cell-system components integrated with Hexagon measurement systems. 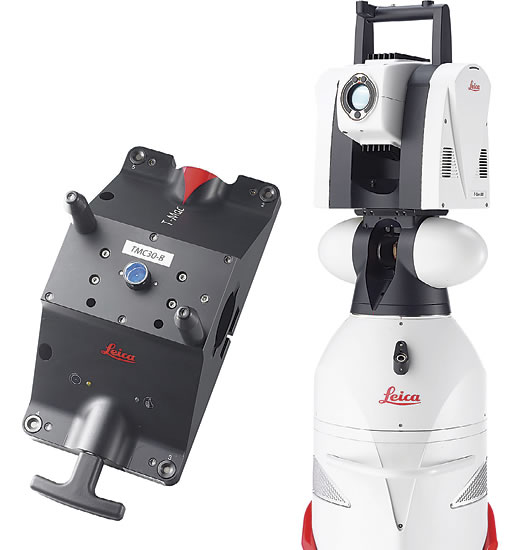 According to PrecisionPath Chair Ron Hicks, laser trackers are among the most used and most improved measurement technologies. Hexagon is developing an on-machine inspection system that uses a machine-tool-carried T-Mac six-degrees-of-freedom measurement sensor (left) and a laser tracker (right). Image courtesy Hexagon Machining Intelligence.

“Our initial release has a 3D optic sensor, using white-light technology. And that’s just phase one. In 2017, we’ll release it with our [Leica] Absolute Tracker,” Gudeman said. “Right now it features a fixed robot with one to three rotary tables. The next design will have the robot on a slide, which will accommodate larger components, such as large airframe components or complete automotive bodies-in-white.” (Bodies-in-white are welded-together sheet metal components on a vehicle.)

The system is flexible, modular and portable, according to Gudeman. A customer should be able to set it up in 3 days or less. If a customer changes his assembly layout in a couple of years, “they can simply move the cell—tear it down and set it up again in under a week,” he said.

The modular approach lets users decide if they want to, say, buy a two-station FMC now and expand it to a third station later. “And throughput increases when you have two or three stations, because while you’re measuring, you can also be taking parts on and off of fixtures. You can keep that robot measuring on a continual basis. It’s not waiting for part turnover or anything else,” Gudeman said.

On the machine tool side, Hicks said the industry wants improvements in the ability to measure a part on a machine tool.“They’re looking for a way to measure a part where they don’t have to take the part to a CMM, or else [they know the part is] accurate because the machine that made it is accurate,” he said. “We need to help come up with ways so that manufacturers can know they got it right the first time. There may need to be a coordinate metrology system that interfaces with the machine tool. That may be the future. It’s being done now—to a certain degree.”

Joel Martin, laser tracker project manager at Hexagon, said the company is at work on an on-machine measurement system that puts a machine tool or a robot in the service of a Leica laser tracker and a Leica T-Mac (Tracker-Machine) control sensor, a six-degrees-of-freedom measurement sensor. “The T-Mac can be put on the end effector of a machine tool. We put a touch trigger probe on the end of the T-Mac, as we would on any of our CMMs,” and the device that’s cutting the part also moves the T-Mac, which measures the part.

“On-machine measurements aren’t new,” Martin said. “What’s new is that we are using the machine just as a positioning device. The accuracy is coming from the laser tracker. So you’re not really using the machine to [directly] inspect the part. You’re just using it to move the probe, and readings of where the probe is located in space in XYZ, IJK coordinates is coming from the laser tracker.”

The approach is seeing some promising early successes, Martin added.

The goal, Hicks said, is to get to the point where when a part exits a machine, the maker will already know—through robust knowledge of the machining process or from a successful on-machine inspection technique—that the part is good and all of the variability time loss that comes from having to move the part from the machine to a coordinate measuring machine and possibly back again will be a thing of the past.

But we’re not there yet, he acknowledged, and most industries expect to continue to final-inspect critical parts. And the larger the part, the more challenging that application can be.

Mark Izumi, marketing manager of Mitutoyo America, Aurora, Ill., understands this. He offered an example from the oil and gas industry.

Bill Mole, Express Engineering quality manager, stated, “To inspect our increasing range of larger components with demanding dimensional tolerances, such as wellheads that stand 2m high, we would make a partial inspection on one of our larger CMMs, then reposition the component to complete the inspection routine.”

According to Mole, although the CMM's inspection techniques were accurate, “the volume of wellheads, and other large oil and gas industry components we now manufacture, meant that we needed to find a quicker, more efficient solution.”

The solution turned out to be the largest Mitutoyo CMM installed in the U.K., a custom Mitutoyo Crysta-Apex C. To enable oversize components to stand upright when being measured, the CMM was modified by an extended Z-axis and a 3.9'-dia. (1.2m) hole bored through its granite measuring table. Riser plates were fitted to elevate the granite table and a lower component support was located beneath the hole. These modifications enable extra-large components, such as 6.6'-high (2m), 4-ton (3,629kg) wellheads, to be lowered by crane through the table and accurately measured in a single setting.

“In addition to further improving our already excellent large-component accuracy capability, our new CMM has enabled us to slash our inspection times on components such as wellheads,” Mole stated. “For instance, a comprehensive final inspection routine on a complex wellhead that previously took over 12 hours now takes just 4 hours.”