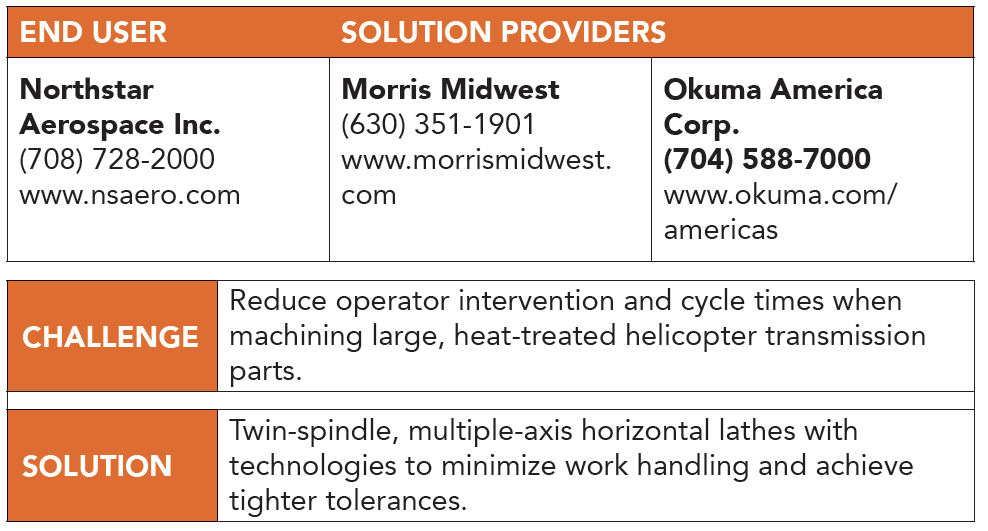 Multiple machine tool builders offer equipment for machining the helicopter transmission components Northstar Aerospace Inc. produces at its Bedford Park, Ill., facility, but not all are equally efficient in handling the task.

The parts weigh up to 350 lbs. (159 kg), have diameter tolerances as tight as 0.0003" (0.0076mm) and are made of aerospace-grade superalloys typically hardened from 50 to 60 HRC, said Brian Cheek, vice president and general manager at Northstar.

In addition to the “very attractive offer to bundle the two machines together,” Cheek said the Okuma machines are more rigid than the previous machines, in part because of their heavily ribbed bed and base casting and the Okuma “thermal-friendly” design. “Having more rigidity certainly helps with the tight tolerances we must hold for the aerospace industry,” he said, adding that the enhanced rigidity enables Northstar to take heavier DOCs, including interrupted cuts, and reduce cycle times compared to its previous machines.

Cheek added that Northstar was able to quickly accept delivery because the machines were readily available from Morris Midwest, while others offered lead times in excess of a year. Nonetheless, shipping and installing a machine tool as massive as the MULTUS B750 required four 18 wheelers and a team of skilled technicians. The machine has a large work envelope, a 41" (1,041.4mm) turning diameter and a 160" (4,064mm) turning length with a subspindle. (To view a video of the 4-week installation process in a little more than 3 minutes, visit youtube.com and enter “Northstar Okuma” into the search field.)

Along with the machines, the purchase package included operator training at the Okuma Aerospace Center of Excellence, Charlotte. “The feedback from the operators was that they were very pleased with the training,” Cheek said.

The technologies of the MULTUS B750 limits operator intervention and work handling. Previously, operators had to remove a component from a machine and flip it to machine the opposite side, but, with the twin-spindle capability of the new 6-axis horizontal lathe, the work can be transferred from the first spindle to the second one automatically. Cheek added that theNorthstar improved part handling by 50 percent and overall operation efficiency by 30 percent. 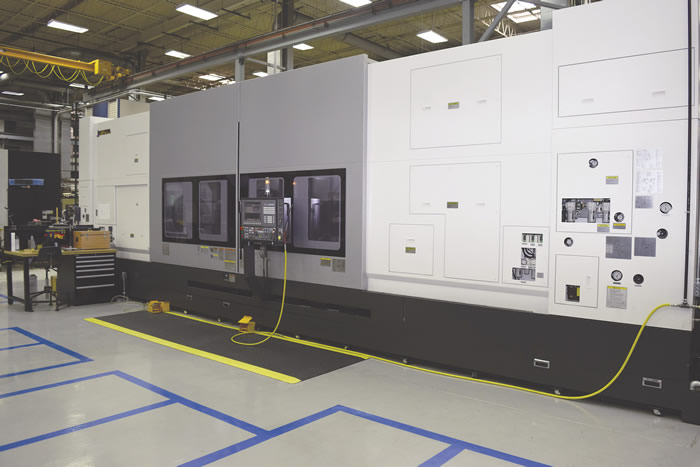 To overcome issues Northstar was experiencing with part distortion on its previous machines, the company worked closely with Okuma and Morris application engineers to fine-tune the cutting processes. Northstar discovered by changing the order a part is cut, it could minimize distortion.

In addition, Northstar overcame the machine crashes it was struggling with on the previous machines. “Any time that happens, getting parts for the machine becomes an issue and creates downtime,” Cheek said. Okuma’s Collision Avoidance Software (CAS) comes standard on the MULTUS. According to Okuma, the software aids in increasing shop floor efficiencies by integrating 3D modeling of Okuma machines, tooling and part blanks with the machine tool builder’s OSP-P control. This creates a virtual machine that runs real-time virtual applications to detect cutting problems and prevent costly crashes.

In addition to the CAD/CAM software, the setup on the B750 also includes other efficiency-improving technologies from Partners in THINC (a collaboration among Okuma and suppliers of cutting tools, software, workholders and other manufacturing equipment). These include: a probe from Renishaw Inc. for in-process gaging, which allows the machine to check the part itself without operator intervention; a high-pressure coolant system from MP Systems Inc., which enhances coolant flow to the cutting tool and helps extend tool life; and Tool Monitor Adaptive Control from Caron Engineering Inc., which monitors electric current load to the spindle and stops the machine if the load exceeds its established value. TMAC also has an adaptive feature that increases or decreases cutting feed rates if a load is within a safe cutting range. Northstar also turned to Sandvik Coromant Co. for toolholders and inserts.

“The partnerships between those companies, as well as Northstar, has improved the overall process and achieved efficiencies to support the troops,” Cheek said.