He pointed out, however, that the common approach for general machining is 3+2, or five-axis positional, machining, in which a three-axis machine is equipped with a rotary table or tilt-rotary trunnion. He estimates that about 70% to 75% of the multiaxis work is performed via 3+2 rather than simultaneous when cutting up to five sides of a prismatic workpiece in one fixturing.

“One of the main advantages over a multiaxis platform is just the ease of operation to have that ability to get to multiple sides of a workpiece as compared to flipping it how many times it might be needed to get to all sides of that workpiece,” Wallace said.

On a standard three-axis machine, the only part face that the machine could cut with a cutting tool in its normal position would be the horizontal face that looks directly at the spindle, said Errol Burrell, machine center product specialist at Okuma America Corp. in Charlotte, North Carolina.

“With 3+2,” he said, “you could put that same cube in a vise and rotate those faces to be normal to the spindle and to the tool — all five faces, including the one that is the default to the tool, which is flat on the table. To be honest, five-axis simultaneous should be used as the last resort.”

Burrell said even manufacturers with the capability to do simultaneous multiaxis machining frequently don’t.

Mike Kerscher, technical/application specialist at Mazak Corp. in Florence, Kentucky, estimates that the percentage of multiaxis machining being the 3+2 variety is at 80% or “maybe higher.”

“Our customers figure out that they don’t have to index their part four times to get it made,” he said. “They can put it on a single machine with more functionality and to machine features that may or may not be at odd angles, even if it is a true cubic part that they can get to four or five of the six sides in one workholding. That’s the game plan.”

Wallace said even makers of automotive parts, which usually specialize in serialized production in which one operation is performed on one machine before moving down the line to the next machine, are “starting to wake up and pay attention too. They are starting to look at multiple-axis machines to do multiple operations in one workholding setup.”

He said he sees this transition increasing as more electric vehicle components are produced.

“I don’t think that I’ve had a customer in the past 24 months that didn’t request a multiaxis platform,” Wallace said.

One of the biggest benefits of 3+2 machining is the reduction of setup time.

“On average,” Wallace said, “and this is just ballparking, you are going to save easily 20% to 25% in setup time, if not more, just because you don’t have to handle that part multiple times.”

A 3+2 approach also boosts throughput. Kenzie Roaden, Mazak’s Advantec product manager, said after machining one side, it’s common for parts produced on conventional three-axis vertical machining centers to sit for hours or even days until features are machined on additional sides.

“Maybe it’s just one other feature,” he said, “but the operator has to finish the run of parts on the machine and then change the setup and start again. That part sits in limbo, and that’s the problem.”

While setup time goes down with a 3+2 arrangement, the time spent machining a part isn’t necessarily impacted.

“It’s all about moving the part through a factory more quickly,” Roaden said. “It has little to do with cycle time and more to do with throughput.”

“Whenever we touch it, take it out and put it into another piece of workholding,” he said, “we have a potential for tolerancing issues.”

Also, 3+2 machining offers the opportunity to improve accuracy by being able to position a workpiece so that short, rigid cutting tools are applied, such as when producing undercuts in cavities and steep walls.

“Rather than using some custom, extra-long tool or holder and risk vibration,” Burrell said, “you can use standard, off-the-shelf tools.”

Those standard offerings not only provide precision benefits but save money.

“There is easily a 10% to 15% decrease in tooling costs because now I don’t have to have special tools,” Wallace said. “I can use more off-the-shelf, standard catalog tooling because now I have the freedom to reach into my part at different angles, and I don’t need an especially long tool or special to make that feature on that part.”

Nonetheless, Kerscher said the 3+2 environment can pose challenges to accessing a part if a cutting tool has to reach across workholding devices, such as clamps.

“That is a concern or something to be aware of that there is a potential for the tools to get a little longer,” he said.

Roaden said a high level of skill is required to program multiaxis simultaneous contouring, such as having in-depth knowledge about inclined plane rotations and the multitude of G codes to access multiple part faces.

“Simultaneous five-axis is something that when I was coming up, everybody could make a nice cartoon,” he said about machine simulation. “But could you get that tool to do that and with hangout and cutting forces to actually make the part? Just because you created a good cartoon doesn’t mean you’ve created a good metalcutting toolpath. I’m guilty of that.”

Roaden said conversational programming with Mazak’s Mazatrol CNC is suitable for 3+2 machining, which is not the case for true five-axis contouring.

“With 3+2,” he said, “I’m basically cutting with a three-axis mill, but I’m just rotating angles and planes. We can make it very easy to program what you might call prismatic or multifaceted work.”

With the advent of more user-friendly CAM systems and controls, Wallace said, “it is infinitely easier for shops to embrace multiaxis platforms and make them productive a lot quicker and being able to manage them a lot easier.”

He said advances in controls have eliminated some programming issues.

“For example, back in the old days we’d always have to post the center of rotation outside the CAM system,” Wallace said. “We had to know the height of the fixtures. All that had to be put into the post-processor. But with the functionality of the controls these days, I can literally put that workholding in the center of the table, indicate it within a millimeter or two, probe to find the center of that part — and that’s all I need to do. The rest of the compensation is taken care of by the control.”

Relatively few parts are not suitable for 3+2 machining, including complex components.

“Something like a steering knuckle on a car is not an easy part to make, but it is basically still 3+2 geometry, where you have to put holes in it at odd angles,” Kerscher said. “It essentially demands a machine that is at least capable of 3+2.”

Wallace said very complicated shapes, such as an airfoil for an airplane wing, often are considered suitable only for producing on a machine with simultaneous multiaxis motion, but a 3+2 machine can handle it.

“It would just take more time to create that feature,” he said, “where a simultaneous operation would reduce cycle time.”

However, a small selection of obvious part types falls outside 3+2’s realm.

“Unless you are making a shaft,” Wallace said, “just about every industry is increasing their interest in multiaxis platforms.”

He said other parts are too simple for that type of platform.

“If I’ve got a million aluminum brake cylinders that I have to drill six holes in,” Wallace said, “multiaxis is probably a bit of overkill because I am literally drilling six holes. So a horizontal with a tombstone and big linear pallet pool sitting out in front is probably a better solution because it’s less complicated. There is a crossover point.”

But for a prismatic part with features on five sides, he said a 3+2 platform is difficult to beat once an end user crunches the numbers. And if the sixth side also requires machining, flipping the part in an automated cell can get the job done.

Even if a part manufacturer doesn’t currently see a need for a 3+2 machine, adding one can be a wise move to increase business in the future.

“A multiaxis platform allows a customer to start going after work he may not have been able to go after before,” Wallace said. “Don’t paint yourself into a corner with capability. You will be able to get payback quickly because of the work you are able to quote and bring into your shop and make money.”

In addition, “don’t be scared,” Burrell emphasized, adding that having a VMC with 3+2 capability compared with a conventional three-axis machine “easily triples spindle uptime.”

“In that particular machine,” he said, “the x-, y- and z-axes stay the same, and the additional two axes are in the attachment head. In the double column, all the rotary is inside the head.”

In addition, heavy-duty milling of large parts is possible on the machine through features, such as an integral motor and spindle, an expanded work envelope and a rigid table, which is 30% thicker than previous models, according to the company.

O’Toole said a big benefit of a double-column machine with such capabilities is its ability to access part features. He said the machine can impart fine surface finishes to improve part quality.

Okuma America reports that an abundant number of attachment heads are compatible with the machine, allowing a wide range of part shapes to be created, as well as many multitasking functions to be performed. 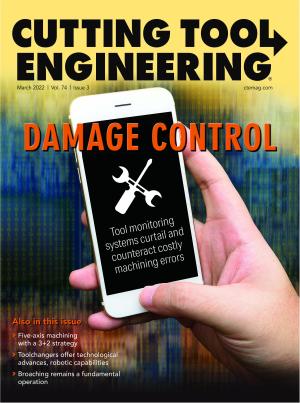