Whether you’re a truck driver, a commercial airline pilot or a snowmobiler, a leaky hydraulic system or fuel line can spell big trouble. A little fluid in the wrong place on these and a host of other vehicles and machinery might create a life-or-death situation for operators and passengers alike.

That’s why organizations like SAE (Society of Automotive Engineers) and ISO (International Standards Organization) have developed a series of standards that make even the highest-pressure, most-demanding fluid connection leak-free. These include SAE J1926, SAE J514, MS 33649/SAE AS5202, ISO 6149 and other technical documents that describe threaded connections.

Some fluid connectors come with O-rings, others with metal-on-metal seals, but all rely on a complex shape that is usually machined with a port tool.

Port tools can be resharpened many times and, according to Wetmore Tool, may last decades. Photo courtesy of Wetmore Tool and Engineering.

Dale Christopher, president of Scientific Cutting Tools Inc. (SCT), Simi Valley, Calif., said his father built the business on port tools. Even though that source of revenue has fallen relative to the other types of cutting tools the company now offers, there’s still plenty of demand from hydraulic-manifold manufacturers, automotive and aerospace customers, and electromechanical equipment suppliers.

For those scratching their heads over the bewildering array of port specifications, the situation’s not as complicated as it first seems. “The military came up with a standard hydraulic connector many years ago for connecting hose lines to hydraulic fittings,” Christopher said. “That was the start of the MS (mil-spec) standards. Some are still the
original Army or Navy design, but quite a few have been replaced by SAE numbers.”

Nor are ports as complex as they initially appear. “It’s really just a series of diameters and angles,” he said. “Sometimes you’ll have radii callouts and sealing surfaces with tight finish requirements. Because ports are used with a connector, there’s a thread somewhere, usually at the bottom, that can be tapped, thread-milled or single-pointed if you’re turning the part on a lathe.”

Porting is not rocket science. However, the configurations are sufficiently complex that they would be extremely challenging to make on most machines without what is essentially a big form tool. CNC lathes make it possible to shelve port tools in favor of a boring bar and CAM-generated toolpath. Still, port tools remain commonplace on machining centers, mechanical screw machines and even drill presses, where profiling the port shape is impossible.

“Porting on a drill press or transfer line requires a tool with a ground body so it can slide into a bushing mounted in a drill plate to guide the tool into the workpiece,” said Phil Kurtz, vice chairman of the board at Wetmore Tool and Engineering Co., Chino, Calif. “But those tools are rarely used anymore because hardly anyone uses drill presses. Virtually everything is made on CNC machines today.”

Other port tools have also seen a decline in popularity. Kurtz said the company has a long history of manufacturing port tools, but much of the work has dried up as aircraft designers move away from specifying hydraulic control systems in favor of electronic ones. As a result, Wetmore has redirected most of its development efforts into aircraft assembly tools, such as extension and core drills. 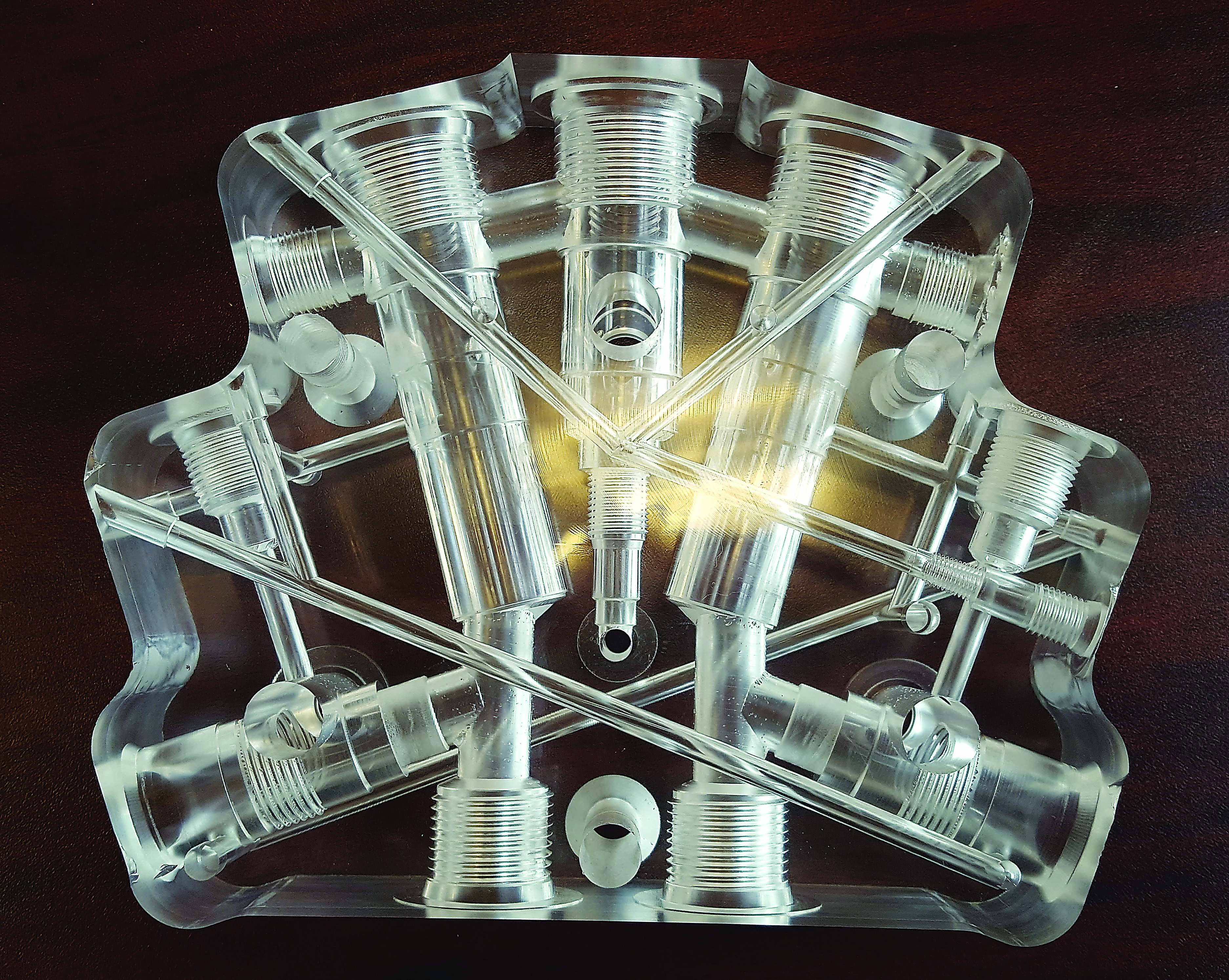 A mock-up of a ported agricultural valve body for a trade show presentation. Image courtesy of New Dimensions Precision Machining.

“We still see a fair amount of activity with standard brazed porting tools, but it’s not like it once was,” Kurtz said. He added that cartridge cavity tools remain fairly strong. “These are quite similar to port tools but larger, to accommodate a two-, three- or four-way hydraulic valve body that might be used to control a backhoe, for example.”

One of the biggest challenges with any porting operation is chatter. SCT’s Christopher said a 3-flute port tool is often effective in combating chatter. However, the feed rate is sacrificed because there’s one less edge in the cut compared to the more-common 4-flute port tool. “That’s why we take a diamond brush hone to all our tools,” he said. “This puts a microscopic edge break on the sharp edges. [It is] a little like rubbing a penny or a Scotch-Brite pad on the tool’s spot face, a trick that many veteran machinists are familiar with.”

This is good advice. Anyone who’s used port tools knows that they generally work best after a short wear-in period. They also last a surprisingly long time.

Someone who can speak to this is Bill Jones, president of Enderle Fuel Injection Inc., Simi Valley, Calif. He recently broke a tool he’d been using for the past 10 years. “I was hoping to get an 11th year out of it,” he laughed.

Enderle applies SCT tools to port barrel valves, fuel shutoffs, fittings and other racing equipment components. Most of these are made of 6061-T6 aluminum, although Jones said Enderle machines some cast aluminum, which is somewhat abrasive. Still, he and his team have “zero problems” with tool life or chatter—success that Jones attributed to a rigid setup and high-quality cutting tools.

Porting in the Heartland

Another porting success story comes from Union, Ill. Brian Halwix Sr., director of manufacturing engineering at New Dimensions Precision Machining Inc., said the company produces a variety of aluminum and cast iron hydraulic manifolds for the agriculture and construction industries on its three Makino flexible-manufacturing systems, which utilize 19 horizontal machining centers. For Halwix, the biggest challenge with port machining is breaking into cross-holes. 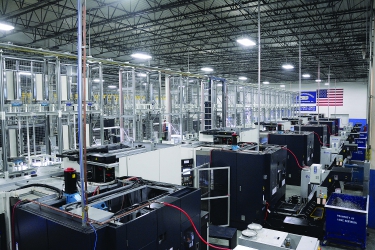 The 19-machine FMS at New Dimensions produces a variety of aluminum and cast iron hydraulic manifolds for the agriculture and construction industries. Image courtesy of New Dimensions Precision Machining.

“Porting is pretty straightforward otherwise,” he said. “But when the tool breaks through into a neighboring hole, it tends to lose stability, causing problems with straightness and position.” Halwix added that roundness is also a concern, especially when maintaining a 0.33 Cpk allowance of ± 0.0013" (0.03mm). “The hole can easily end up egg-shaped if you don’t control the cutting forces.”

Halwix said there are two ways to avoid this problem. The first is proper part processing, particularly machining ports in the right order to avoid cross-holes in the first place. The next course of action is tweaking the tool design by adjusting flute margins and using other tricks of the porting trade. “It’s all about cutter technology,” he said. “That’s why probably 30 percent of our tools are custom, which we designed in-house based on our own education and experience.”

Hartland Cutting Tools Inc., Cary, Ill., is near New Dimensions. Owner Mike Polizzi said he provides solid and carbide-tipped port tools, although HSS and indexable versions are available from other suppliers. Customers must also decide on the style of tool to apply:

“Port tools have become quite specialized and high-performance over the years,” Polizzi said. His company still offers the same standard tools that were in use 30 years ago. However, according to Polizzi, companies like Eaton, Vickers, Hydac and Sun Hydraulics have all developed their own application-specific geometries. “Most of these are straight-flute tools, but some have a slight helix to improve finish and size control. Sometimes we’ll grind the flutes off-center a small amount for customers machining a lot of aluminum.” 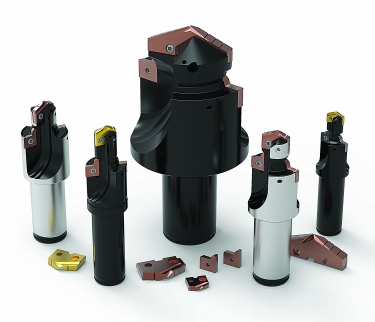 As with any indexable cutting tool, these port tools increase uptime. Just change the insert and go back to work. Image courtesy of Allied Machine and Engineering.

Polizzi said most of his clients want through-coolant tools, something he heartily endorses. He recommends 1,000 psi, whenever possible, and the use of a high-quality toolholder, preferably a hydraulic chuck rather than an endmill holder. “Drill the port, dwell for a second or two at the bottom of the hole and you’ll be in good shape.”

What about port tools with indexable carbide inserts? Solid-carbide and brazed tool aficionados might disagree, but for many applications, indexable tools are suitable. “Aside from the threads, our tool cuts the entire port in one operation,” said Rob Brown, product manager at Allied Machine and Engineering Corp., Dover, Ohio. “When it gets dull, you just change out the insert and go back to work. You don’t have to worry about regrinding or knocking out the old carbide and brazing in new pieces.”

Brown said indexable cutters are also more cost effective. Each insert costs around $35 to $70, and a dual-insert cutter body runs roughly $600, depending on the size. This is about twice the cost of a comparable brazed tool, but Brown said users of traditional port tools need to have multiple cutters: one in the machine, a spare in the toolcrib and one out for regrinding.

“With indexable cutters, you need a couple of spare inserts and screws,” he said. “And there’s no need to spot-drill, drill and rough the port form as there is with traditional port tools. You just come in and drill, and the port’s ready to go. Because you’re not worried as much about tool life, you can be a bit more aggressive on feeds and speeds. The end result is a lower cost per part.”