As parts manufacturers continue to boost productivity, customers typically demand a reduction in the price of machined parts every year, feeling they deserve a “productivity discount.” However, profitability is dangerously eroded. To survive and hopefully thrive, a manufacturer’s input costs must be reduced. 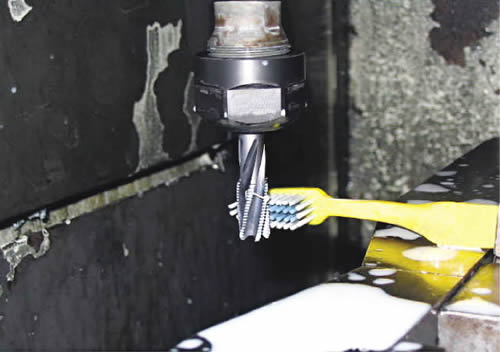 Tool life and the quality of the threaded aluminum component improved after ABI Showatech started brushing the tap’s cutting edges.

An initial breakthrough came when tapping was studied for thread quality. This was prompted by a customer complaint about fine metal particles sticking to thread walls.

We tried various methods, such as increasing the coolant pressure from 3 to 10 bar (44 to 145 psi) when tapping, applying taps with wear-resistant coatings and enhancing lubricating properties. Unfortunately, the improvements were minimal and not satisfactory.

Examining a tap’s cutting edges under magnification revealed minute particles adhering to the edges. We concluded that these metal particles were from the aluminum workpiece material and created a barrier. Although minute, this barrier prevented the tap from effectively cutting the threads. Our assumption that increased coolant pressure would remove the metal particles proved incorrect.

Then the idea of cleaning taps with a brush—a mechanical operation—was proposed, which has to be done for every tapping cycle. To prevent the time-consuming interruption of the tapping cycle for brushing in a machining center, a brush with nylon bristles was mounted to the fixture, and the machine was programmed to swipe a tap against the stationary brush before commencement of the tapping cycle.

As a result, the machine operator reported improved quality of the threaded component after gaging it. The threads were clean and free of loose, tiny burrs. The thread quality was maintained even after exceeding the prescribed tool life, which we determine for every tool applied to help manage tool inventory. New tool life parameters for the taps were then established (Table 1).

Table 1: Tap life before and after brushing.

Before and after brushing was introduced, the M10 X 1-6H tap from Emuge (India) was run at a 600-rpm spindle speed and a 1-mm/rev. feed. The tool cost savings from brushing was about $650 per year.

Brushing began with taps and was extended across the board for all cutting tools. The extension of tool life was not uniform for every tool, but the results were encouraging. Tool life improved from 200 to 400 percent by brushing the cutting edges at the beginning or end of each machining cycle. Tests were conducted for more than 6 months on ceramic indexable milling inserts.

Table 2: Tool life comparison of drills applied for machining aluminum master cylinders before and after brushing.

The advantages of tool brushing includes improved part quality, longer tool life, lower tool inventory and an increase in machine uptime because of a reduction in the frequency of tool changes. The total cost savings for brushing all tools in our operation is about $12,600 per year.

We tried to extend tool life further by using brushes impregnated with abrasives, such as aluminum oxide or silicon carbide. However, tool life was reduced by using abrasive-impregnated brushes in all cases.

Work is being performed to fix a rotary ring brush in a tool’s home position in an automatic toolchanger, which should improve cycle time. CTE

About the Author: K.V. Rangaswamy is executive director for ABI Showatech (India) Ltd., a high-volume manufacturer of automotive parts, including master cylinders, turbochargers and camshafts. He can be reached via e-mail at rangakv1933@yahoo.co.in or balaji.r@turboenergy.co.in.

K.V. Rangaswamy is executive director for ABI Showatech (India) Ltd., a high-volume manufacturer of automotive parts, including master cylinders, turbochargers and camshafts. He can be reached via e-mail at rangakv1933@yahoo.co.in or balaji.r@turboenergy.co.in.