Collets are among the items most commonly found at machine shops. But people who routinely use these toolholding mainstays probably don’t have all the important facts about them.

That’s because there’s a lot to know about collets — in a number of different areas. These include how collets stack up against other toolholding options and the latest in collet technology, as well as how to choose and use collets to extend their lives and get better results with machining.

Placed in a chuck, a collet forms a collar around the tool to be held. The standard ER collet is the most widely used tool-clamping option for machining applications. Commonly used to hold endmills, drills, taps and reamers, ER collets exert clamping force when tightened with a nut.

Other well-known toolholding alternatives include shrink fit and Weldon flat — also known as side lock — as well as hydraulic and milling chucks. Compared with these, the biggest advantage of ER collet systems is their versatility, said Alan Miller, engineering manager at BIG KAISER Precision Tooling Inc., Hoffman Estates, Illinois. 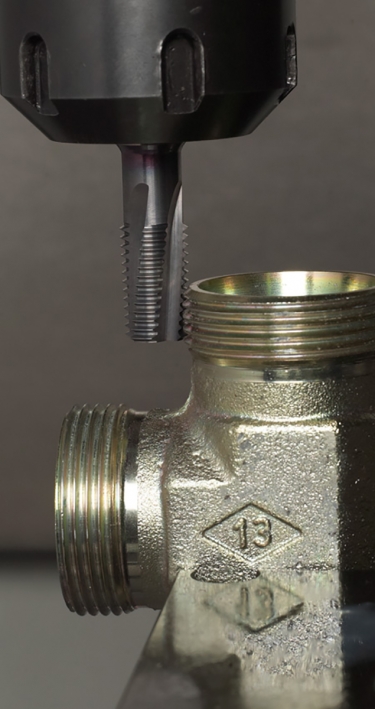 Held by a collet, a thread mill cuts threads (above). Image courtesy of Guhring

With the other options, “you’re really locked in to one size toolholder for a specific-size cutting tool,” he said. “But with collets, one holder size can hold a wide variety of cutting tool shanks. Especially for smaller shops, that versatility will make things easier.”

“But the base holder remains the same,” he said, “and you just change out the collet to clamp on to different tool sizes.”

On the other hand, shrink-fit holders are sized based on tool shank diameter, said Dan Doiron, milling product manager at Emuge Corp., West Boylston, Massachusetts. This means that a shop would need a different shrink-fit holder for each tool diameter. In addition, he said, a shop using shrink-fit holders needs a heating unit to install tools in the holders, adding more cost to that option.

While shrink-fit and Weldon flat toolholders accommodate only one tool size, hydraulic and milling chucks allow the use of straight reduction collets to change tool sizes, Miller said. But he added that the presence of reduction collets in these chucks hurts their performance, resulting in increased runout and/or decreased clamping force. 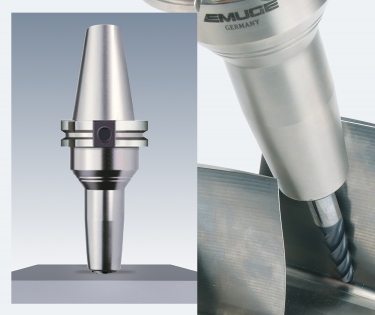 FPC Slim Line collet chucks are designed to make it easier to use cutting tools in confined work areas. Image courtesy of Emuge

Besides the versatility of the ER collet system as a whole, users get the toolholding flexibility of the individual collets in the system. This is due to the slotted ER collet design, which allows a good deal of compression and therefore can accommodate different tool shank diameters, explained Andy Moon, product manager for milling and toolholders at Guhring Inc., Brookfield, Wisconsin. He added, however, that this flexibility is limited to a small range, which can be anywhere between 0.5 mm (0.02") and 1 mm.

On the downside, Miller said ER collets fall short compared with other toolholding options when it comes to gripping strength. As a result, he said, ER collets are not well suited for high-torque cutting. So his company mostly recommends them for finish milling, drilling and reaming applications.

A problem with ER collets in this regard is what gives an edge in flexibility to them over competitors: their compressibility.

“When you have a larger amount of collapsibility, there is more room for runout to be introduced and quite a bit more room for instability or chatter,” Moon said. “So for high-performance applications, especially being a milling guy, I generally do whatever I can to steer people away from an ER collet chuck.”

He added, though, that many people use ER collet chucks for light milling.

But even when customers come in with relatively light milling applications, Moon said, “if we can get them to move to a hydraulic, milling or shrink-fit chuck or even a side-lock holder, they can double their tool life because the tool isn’t moving around as much in the chuck and you don’t get the chatter.”

For shops set on using ER collets, he said the best way to optimize performance is to closely match collet size with tool shank diameter.

“If you need to hold on to a 1⁄8" endmill or drill, you want to use a 1⁄8" collet even though there is some flexibility in that size,” Moon said. “The more the collet compresses, the more runout you’re going to introduce.”

Shops that want to use collets but don’t want the compressibility of the ER type may want to consider FPC collets sold by Emuge.

“Our collets have a minimal amount of flexibility, following ISO H6-H9 standards,” Doiron said. “They are designed to fit one specific tool diameter.”

The company recently expanded its line of FPC collet chucks to include Slim Line models. Available in 2 mm to 14 mm sizes, the slim design and tapered shape of these models eliminate problems caused by a toolholder when trying to access work in confined areas or negotiate challenging angles.

“These are specifically designed to get into very difficult areas during five-axis machining,” Doiron said.

Other recent developments involve collet designs that depart from conventional shapes. Most traditional collets have a taper. As the toolholder nut is tightened, this taper is forced into a matching one in the toolholder. Hydraulic chucks, however, lack this taper.

Inside these chucks is “just a straight bore,” Miller said. “So you need a tightly toleranced straight cylinder to go inside these holders.”

For hydraulic chucks, BIG KAISER Precision Tooling has introduced straight reduction collets. One type, which is called Perfect Seal, seals the cutting tool shank so coolant can flow through drills at high pressure. The other, which is named Perfect Jet, lacks a seal but reduces the clearance between the collet and cutting tool to improve coolant delivery along the tool shaft.

“The idea is to keep the coolant focused down the shaft of the tool rather than fanning out,” Miller said.

When using collets, the things that shops do — and don’t do — can make a big difference in how collets perform and how long they last. One common mistake made with collets is over-tightening the collet nut.

“People get the idea that tighter is better, but that’s not the case,” Moon said. “When you over-tighten, you’re over-stressing the nut and collet, and the metal starts to yield and bend at some point.”

For best results, he recommends the use of a torque wrench for tightening. He said shops today can find tightening torque recommendations for different ER collet sizes.

Torque wrenches aren’t used to tighten collet nuts in most cases, Moon said. But shops can get satisfactory results using a spanner wrench.

Generally about 152.4 mm (6") long, spanner wrenches for ER collet nuts “are designed to keep you from imparting a giant amount of torque to those things,” he said. “But shops get into trouble when somebody torques down (the nut) by hand and then grabs a hammer and gives the wrench a couple of hits just to make sure the nut is really tight.”

To extend the reach of a tool an extra 12.7 mm (0.5"), “people will push that tool out to the very end of the holder,” he said. “It’s as if you were holding a stick with the very tips of your fingers versus holding it with your hand.”

Not surprisingly, overextending a tool in this manner increases the chance of failure.

Some effective practices for getting the most from collets are easy and obvious. For example, Moon recommends taking out and thoroughly cleaning a collet and collet chuck every time that a tool being held is changed out. Simply blowing off chips and any other debris with an air hose is all that’s required. He said if cleaning isn’t done regularly, debris will cause wear on the outside of a collet and the inside of a toolholder.

In addition, shop personnel should visually inspect the collet and chuck while a toolholder is out of a machine and disassembled.

“If anything looks like it’s all chewed up,” Moon said, “it’s probably best to throw it out and get a new one.” 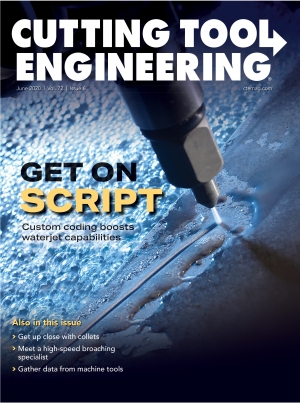