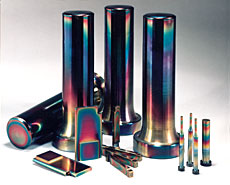 Tool coatings have come a long way since the introduction of TiN three decades ago. There’s no doubt that the coatings you’re using today are stronger and more cost-effective than ever.

But a new crop of coatings has emerged recently, promising better performance and higher profits for tough machining applications. Kind of makes it tempting to replace your entire coated-tool inventory, doesn’t it?

But wait! As with any new development, it’s important to weigh the potential advantages and disadvantages of the newcomers.

In the pages that follow, we’ll offer a brief update of several technologies, including multilayer, multielement and diamond coatings. We’ll also discuss how the recent push towards dry machining will affect coating R&D.

Everyone’s talking about multilayer coatings these days. They allow users to take advantage of the strengths offered by several different materials.

"We’re working on some multilayer coatings and have had some phenomenal success with tool-life improvements," said Wharton. "One particular coating that we’re playing with now shows the ability to prevent built-up edge."

Mike Graham, a researcher at Northwestern University’s Advanced Coating Technology Group, Evanston, Ill., agreed that multilayer coatings will play an important role in the near future.

"Multilayer coatings, in general, are very promising in the near term because they are easy to make and properties that are needed for an application [can be selected]," he said.

According to Graham, the coatings are twice as hard as traditional coatings such as TiN and TiCN. He has successfully used them on drills, endmills, inserts and gear-cutting hobs.

"Superlattice and other nanocomposite coatings offer the opportunity to design coating properties for specific application areas," said Graham. "[The user] has the ability to exert more control on the combinations of material properties—hardness, toughness, friction, electrical resistance—that will be advantageous for a range of applications."

SAC International Inc., Dayton, Ohio, has come up with a unique twist to multilayer technology: multielement coatings. Its Laser-Cut 964 "rainbow" coating is similar to multilayer coatings in that it incorporates several different materials. However, Laser-Cut 964 does not consist of layers. Instead, eight different elements are combined into one superthin coating.

This coating is produced during a process called ion sputtering. First, gaseous elements are injected into a vacuum chamber at 850° F. An electrical charge causes atoms in the gases to explode, then a thin rainbow-colored film is deposited onto the tools.

According to Daryl Blessing, SAC’s CEO, Laser-Cut 964 greatly extends tool life for endmills, drills, taps and other cutting tools. "It offers three, five or even seven times longer tool life than other coatings," said Blessing. "This coating is ideal for any tool where friction and wear are a concern."

Laser-Cut 964 is extremely hard, having a Rockwell hardness of Rc 90 to 92. In addition, the high-lubricity coating has a coefficient of friction of 0.027. Although the cost of the Laser-Cut coating is approximately 25 to 30 percent higher than TiN, users often increase productivity by 25 to 50 percent, according to Blessing.

Northwestern’s Graham feels that multilayer- and multielement-coated tools are powerful additions to any toolcrib. And, he expects these "multi" technologies to continue to improve metalcutting in the future.

"Multilayer and multielement coatings, as a class, have much promise because of the variety of materials that can be chosen and the different properties that can be designed in," said Graham.

Much has been written about the advantages of CVD diamond coatings: improved workpiece finish, lower cutting forces, less buildup and longer tool life. However, users have often complained that diamond coatings don’t adhere well to the tool substrate.

One response to this problem comes from Norton Diamond Film, Northboro, Mass. According to Brian Cline, a product engineer at Norton, its CVD diamond coatings provide excellent results without adhesion problems.

Cline said this is because of Norton’s proprietary coating technology, which creates a strong chemical bond and a tough, crack-deflection mechanism at the film-substrate interface. He also said that the strength and high wear-resistance of diamond coatings make them ideal for a wide variety of applications.

"[Diamond-coated tools] can definitely be used in graphite machining, ceramic and tungsten-carbide machining, abrasive or corrosive polymer machining and structural nonmetallic composites," said Cline. "In addition, they should be considered for metal-matrix-composite machining, silicon-aluminum machining, machining nonferrous metals, bimetallic machining and applications where PCD is routinely used but a superior finish is not necessary."

Thin-film diamond coatings are produced in a high-temperature vacuum chamber containing carbon. Hydrogen and methane molecules in the carbon are activated, causing pure diamond to "grow" on the substrate.

"There are several advantages offered by diamond coatings," said Cline. "These include the capability to coat complex shapes, longer tool life in a disposable tool and high-speed operation. Most importantly, it’s harder than other coatings—and the harder you make the coating, the better it performs."

"Coating performance in metalcutting still varies widely depending upon the vendor," said Cline. "The most dramatic performance variations observed in the marketplace tend to be related to adhesion. If the cutting forces exceed the adhesion strength between the diamond coating and the underlying substrate, the unique properties of the coating are lost."

Norton tends to design its coatings for specific applications. For instance, its DF500 coating was designed specifically for roughing applications. The company guarantees that DF500-coated tools will not experience adhesion problems.

"It’s a very rough coating—one of the roughest hard coatings you’ll find," said Cline. "That will limit its ability to produce a fine finish, but it’s ideal for roughing and intermediate finishing."

In addition to its diamond coatings, Norton offers another alternative: freestanding CVD diamond tips that are brazed to the cutting tool like a PCD tip. Cline said that the technology permits the use of vapor-deposited diamond in applications where diamond coatings do not perform well due to adhesion, tolerance or surface-roughness limitations.

According to Cline, diamond coatings will undergo even more improvements in the near future and will gain a bigger share of the market. "A higher level of attention is likely to be given to diamond-coating surface finish and lubricity," said Cline. "Since the most wear-resistant diamond coatings tend to be the roughest coatings, multilayer diamond coatings are likely to evolve."

"The Holy Grail would be the first CBN coating. That’s going to be a significant advancement, because we would be able to run very fast in very hard materials."

One of the driving forces behind coating R&D is dry machining. Jim Maassel, president of Macro Specialty Industries Inc., Napoleon, Ohio, feels that this trend will have a big impact on the demand for coatings in the years to come.

"The trend to run tools dry while optimizing tool life will greatly expand the influence of coatings in both the metalcutting and manufacturing industries," he said.

Graham agreed, adding that the pressure for ‘green’ engineering will continue. "Coatings that enable dry cutting or the reduced use of fluids will be more important," he said. "Cutting tool suppliers and users need to team with coating providers and independent R&D groups to provide the synergy for effective development of coatings for high-performance and cost-effective manufacturing."

SAC’s Blessing said that his company’s Laser-Cut 964 coating also is ideal for machining dry. "It works better with dry machining than other coatings because of its lubricity. It’s made for that," said Blessing. "You might have to lower your speed a little bit or test it through trial and error, but it works great."

The Future of Tool Coatings

With all of these developments currently on the table, it’s difficult to say what, exactly, lies ahead in the coating industry. However, our sources offered a few predictions.

"More choices will be available, along with much better tool performances," said Graham. "Users will [need] to have some coatings and process expertise so that communication with providers is effective."

Wharton agreed, adding that CBN coatings will be an important addition to the coating lineup. "I think that we’re going to see some significant advancements," he said.

Doug Bahun, an advanced manufacturing engineer at Delphi Harrison Thermal Systems, Moraine, Ohio, also believes that coatings will become increasingly important in the metalcutting industry. He envisions a more comprehensive array of coatings that will be usable with more materials and in more applications.

"I’m sure it will include a broader distribution of coated tools across the spectrum of workpiece materials," said Bahun. He projected, too, that coatings will play a vital role in solving many of metalcutting’s toughest problems.

"I think the future of metalcutting and manufacturing is extremely bright," said Bahun. "Engineers have such a wide array of possible solutions that the opportunities are almost endless. And I’m sure, too, that the creativity of chemists and materials experts will be moving forward at an ever-expanding rate."