The allure of aluminum

When a workpiece material is relatively easy to machine and a wide range of parts are made of it, a large number of part manufacturers will machine it. As a result, shops must achieve a high level of productivity to remain competitive, and that’s certainly the case with aluminum alloys.

“For the customer, it’s all about how many cubic inches of material they remove per minute,” said Mike MacArthur, vice president of engineering for RobbJack Corp., Lincoln, California. “The more chips they get out as fast as possible, the more money they are going to make.”

Selecting the appropriate cutting tool, such as an endmill, for an aluminum application requires optimizing the tool’s substrate, geometric features and coating, if one is deposited.

“It comes down to tailoring a tool to a specific part and getting the most out of it that you can,” said Mitchell Parker, process improvement specialist for LMT Onsrud LP, Waukegan, Illinois. “You just have to have the right combination.”

“You think, ‘It is aluminum, and anything can cut it,’ so you can use any tool in the drawer,” he added. “To stay competitive, there are factors in making that high-performance tool that will get the material removal rates up.”

One cutter doesn’t fit all aluminum machining needs, so end users must work with toolmakers that have offerings across the spectrum.

“Because there are such a high variety of parts that are made of aluminum, you have to have a high variety of tools to serve the market,” said Alyssa Walther, automotive specialist for Irving, Texas-based OSG USA Inc., who’s based in Bensenville, Illinois.

A plethora of aluminum alloys are available, but the two most common are 6061-T6 and 7075, which MacArthur said is used usually to make aircraft components.

“The big player is the aerospace market,” he said.

Walther concurred that 6061 is a popular choice.

“It is one of the material grades that we keep around our R&D facility for testing,” she said.

In addition to the aerospace industry, Kyle Matsumoto, automotive specialist for OSG USA, noted that the industry he covers is a major consumer of aluminum, with a focus on high-volume production.

“The big difference between automotive and aerospace is the size of the parts,” he said, “such as machining huge wings.”

Those types of large aircraft parts previously were made of potentially dozens of components that were riveted, bolted or otherwise mechanically attached to each other but now are produced as monolithic structures, MacArthur said. To produce them, aircraft manufacturers sometimes turn 98% or 99% of a workpiece into chips while removing 32 kg (71 lbs.) or more of aluminum per minute.

As a result, cutting tool manufacturers have risen to the challenge.

“We are constantly coming out with a better version of what we did,” Walther said. “Tools that can reach a longer length and still keep chatter and vibration down are constantly evolving as the years go by.”

In addition to the various alloy compositions, aluminum comes as cast or wrought workpieces. Parker said cast can be more abrasive depending on the percentage of silicon. Therefore, cast aluminum often is machined at a slower cutting speed than wrought. LMT Onsrud recommends starting at about 244 to 305 m/min. (800 to 1,000 sfm) when cutting cast 6061 aluminum and 457 to 610 m/min. (1,500 to 2,000 sfm) when machining the wrought variety. 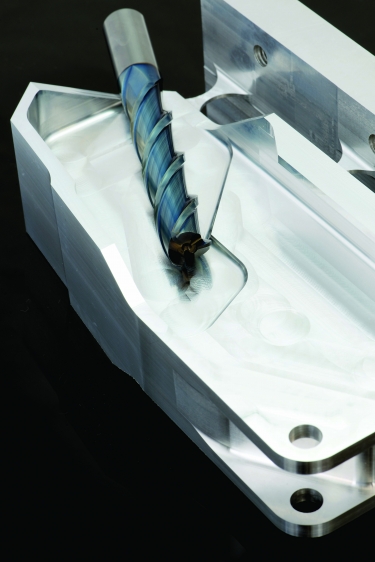 “Those numbers are fine and good starting points,” he said. “But at the end of the day, when you are trying to lead the market or beat the competition, you’re not going to be at a low surface footage or low chip loads unless the material or the part dictates it. It depends on how clean the material is in the casting.”

MacArthur agreed that 305 m/min. is a nice starting point when machining cast aluminum with high silicon content but said a starting suggestion is unnecessary when cutting wrought aluminum.

A tool well suited to cut aluminum starts with its substrate. An end user can apply an HSS tool, but carbide cutters generally are needed to boost removal rates and extend tool life. Parker recommends a carbide grade with less than 10% cobalt because it tends to stick to a tool when exposed to a high level of heat, resulting in built-up edge and dulling upsharp cutting edges. But a tool with too little cobalt might be too hard and therefore too brittle.

While a low-cobalt-content tool is fairly hard, to handle the high amount of horsepower needed to effectively cut aluminum, the tool also must be somewhat tough. That’s where grain size plays a role. MacArthur said the majority of tools with less than 10% cobalt have a submicron grain size.

“Because aluminum is easy to machine, you’re taking 149-kW (200-hp) cuts and removing 70-plus lbs. (32-plus kg) of material per minute, which generates a tremendous amount of force,” he said. “So you want the toughest tool that’s going to last the longest and give you the most wear resistance.”

When milling aluminum, the number of flutes on a tool is critical. Walther said a three-flute tool is common and effective for performing conventional roughing and semifinishing. Two-flute tools, however, provide an added benefit when slotting, deep pocketing and even finishing because their design enhances chip evacuation by providing the most amount of flute space.

“If you have a longer overhang and want a really smooth finish, typically the lower number of flutes will help reduce the amount of cutting vibration because there are only two points,” she said. “You’re basically indexing the tool 180° apart, so it gives the tool a chance to calm the chatter down.”

However, two- or three-flute tools are not the only options when cutting aluminum. Walther said end users performing high-efficiency machining, which generally involves running at high feed rates and taking deeper DOCs (step-downs) and a shallow WOC, are gravitating toward tools with four to seven flutes — or more.

“It depends on what the customer’s style of machining is,” she said.

“We have special five-flute tools that are going to be standard now that people can use to machine at thousands of inches per minute and max out their machines doing high-efficiency machining,” MacArthur said.

Nonetheless, pushing a machine to its limits doesn’t mean stressing it and shortening its life.

Regardless of flute count, flutes should be highly polished to help clear chips and avoid re-cutting them.

“You want the substrate to be as slick as you can get it so nothing adheres to the cutting edge,” Parker said, adding that LMT Onsrud polishes flutes before and after depositing a coating.

“The heavier the core your tool has is crucial,” Parker said. “You definitely need that because you’re applying a lot of forces on that tool by machining aluminum.”

When LMT Onsrud changes tool geometry to suit a specific application, the company bases the change on the horsepower and torque curve of a customer’s machine, he explained. He said the toolmaker can provide specials in about six days for uncoated tools and eight days for coated ones.

MacArthur said the most common helix angle for a rougher is from 35° to 40°. That design also can be suitable for finishing, which traditionally requires a slightly higher helix angle. RobbJack, for example, offers a combination tool for hogging and finishing.

“In the old days, you would rough with a two-flute tool and finish with a three,” he said. “We have the ability now with new geometry to hog with three flutes and finish with that same tool.”

A tool doesn’t necessitate the same geometry for each flute, and a variable helix and/or variable indexing is a well-established design to help minimize vibration.

“A significant portion of the newer tools that we’re developing and bringing in have a variable-geometry component to them,” Walther said.

A comparison is shown of the surface finish imparted when applying (left) and not applying (right) a Mirror Edge tool. Image courtesy of RobbJack

However, RobbJack reports that spring passes, which are cuts taken on a wall a second time or more that follow the same toolpath, might be needed to improve finish and deflection. Company test results show that up to four spring passes can be taken with specific tools without any negative effects.

“Normally, we do not recommend doing that, and we have tools and geometry to eliminate that,” Mac​Arthur said. “It normally reduces tool life and lengthens cycle time. However, when the tool is sticking out and contacting the entire wall at a 5-1 length-to-diameter ratio, the tool has more flex. So a spring pass is necessary to get rid of flexing and taper in the wall.”

“We are trying to reduce the friction so we can avoid chip welding on the tools,” he said.

The coefficient of friction for OSG USA’s DLC coating is approximately 0.1.

Tools that cut aluminum commonly are uncoated. In those cases, Matsumoto recommends much polishing of tool surfaces to combat BUE.

MacArthur estimates that about 30% of RobbJack’s customers order tools with a DLC coating for machining aluminum while the rest choose uncoated tools.

“If you have gummy aluminums, coatings tend to be used more because they add lubricity,” he said. “Most of our customers are using the DLC coating for roughing operations, where they want to get more minutes or hours out of the tool.”

“If your parts are ultrasensitive to having the most razor-sharp edge,” he said, “then the uncoated is a hair sharper.”

Applying coolant also helps reduce friction, resist heat and minimize microfracturing of a tool, Parker said. However, external coolant may not penetrate all necessary part features, such as in a deep pocket if a tool is against a wall. When possible, he recommends through-coolant tools to avoid re-cutting chips and putting unnecessary heat into a part.

To further lessen heat going into a part and tool and instead send heat into chips, end users should examine their machining strategies. He said one that aids with maintaining a constant chip load is trochoidal milling, which is circular milling that includes simultaneous forward movements.

“I know a lot of people are not using radial chip thinning, so they are underutilizing the tool,” Parker said. “More times than not, they are rubbing and not producing the chip thickness that’s desired for a specific radial depth of cut.”

When all elements correctly come together, end users cutting aluminum would be wise to have adequate hearing protection.

“We even have a customer that is cutting so much aluminum that they have cut holes in a wall of the machine,” MacArthur said, adding that the wall was replaced but not the machine. “It sounds like a machine gun going off when they’re cutting aluminum.”

For more information about machining aluminum, view video presentations by RobbJack and LMT Onsrud at www.ctemag.com by entering this URL on your web browser: cteplus.delivr.com/2fbm4 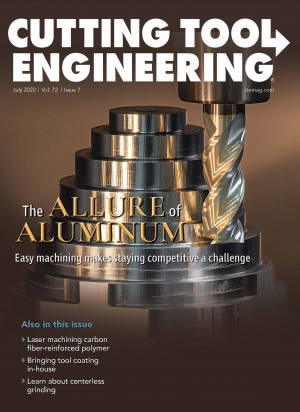