The age of aqueous cleaning

Here is a manufacturing story: In 1985, after a hole in the ozone layer was observed over the South Pole, the nations of the world convened in Vienna to discuss how to save the planet’s environment. In 1988, the Vienna Convention for the Protection of the Ozone Layer was ratified by nearly 200 different independent governments, including the entirety of the United Nations, making it one of the most successful treaties—in terms of participation—of all time.

The following year, agreed-upon, legally binding reduction goals for the use of chlorofluorocarbons (CFCs) were put into force in a second treaty, the Montreal Protocol on Substances that Deplete the Ozone Layer. As a result, the hole in the ozone layer is slowly recovering, and the United Nations Environment Programme projects it will return to 1980 levels sometime from 2050 to 2070.

So … what does this all have to do with manufacturing?

“In the 1980s, a lot of manufacturers cleaned their parts with chlorinated solvents,” said Lyle Carman, sales/technical director for Ransohoff, a parts-cleaning equipment manufacturer in Cincinnati. “Those gave off CFCs, and it was determined they contributed to problems with the ozone layer.” (He also said there had already been a move away from solvent cleaning within the industry before the Montreal Protocol took effect.) 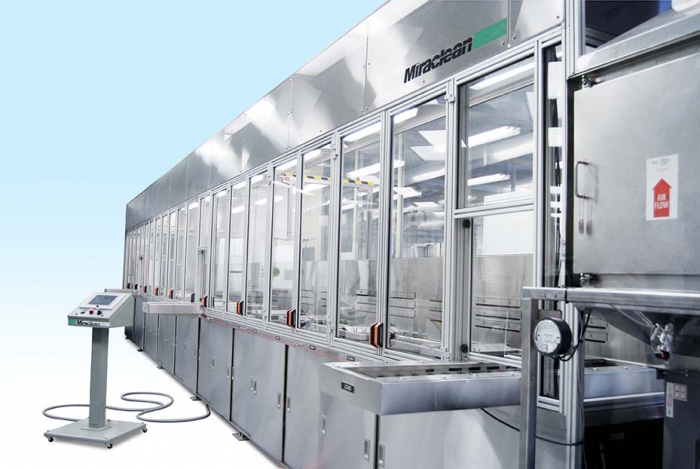 Aqueous immersion parts cleaners, such as this one from Miraclean, can offer multiple wash stations
and full automation. Image courtesy of Miraclean.

“Between environmental concerns and disposal costs, solvents were prohibitively expensive to use, on top of everything else,” said Ken Manninen, vice president of parts-cleaning equipment manufacturer Alliance Manufacturing Inc., Fond du Lac, Wis. Opening its doors in 1994, Alliance arrived on the scene in the middle of the push toward water-based systems, despite the widely recognized efficacy of solvents.

“Aqueous cleaning had been around for a long time, and it actually isn’t too dissimilar from the dishwasher you probably have at home,” Manninen observed. By adding an alkaline cleaning agent to break down the bond between oil and the surface of the part, the efficacy of the hot water is boosted tremendously.

“A lot of what [chemical companies] were looking to do was transition to biodegradable components,” said Kindra Hannig, Ransohoff process applications manager. “The real challenge has been, and continues to be, addressing contaminants that were easily removed by solvent-based cleaners but are more resistant to other methods.”

Carman and Hannig both worked on the development of water-based chemistries at Ransohoff, finding ways to get results equivalent to those achieved with solvents.

“In a lot of cases, we prefer spray washing,” said Alliance’s Manninen. Spray washing can be performed in either a batch or continuous process. “It combines chemistry and heat in a very different way, and the mechanical agitation is built in. The continuous-spray washing process offers an advantage in that it’s typically faster in terms of throughput, because the parts are constantly moving on a conveyor belt or other conveying method. In batch-based immersion systems, you can only have so many parts in the bath at a time and contaminants that are removed can be redeposited onto the parts.” 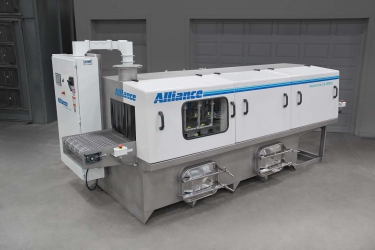 Miraclean, Ashville, N.Y., manufactures immersion systems, with an emphasis on automation and ultrasonic agitation. While the parts-cleaning approach a manufacturer takes has historically been determined by a combination of part substrate, type of soiling agent and part geometry, many companies today—especially in industries such as medical and aerospace—have validation specifications that must be factored into the process as well, according to Cheryl Larkin, marketing manager at Miraclean.

“As requirements get more sophisticated, the value of an automated system that controls everything and can track each part’s journey through the system … becomes more apparent,” she said. “That way, if there is ever a question about a particular lot of parts, you know exactly what they went through in your care.”

The interactions of the components that comprise a water-based system determine its efficacy.

Ransohoff’s Hannig said, “We have an acronym that we use among ourselves: WATCH.” The acronym stands for the five variables that determine an aqueous-cleaning system: water, agitation, time, chemistry and heat. Changing any of those variables changes how clean the part gets.

“A huge part of our job is overcoming all the different barriers that customers, by necessity, put in place,” Carman said. “They may have a part with plastic components that can’t handle high heat. They might have an aluminum part that certain chemistries will actually dissolve. We have to adjust the process to make sure it fits the customer’s needs and still results in a clean part.”

Virtually none of those obstacles existed with solvents, he continued. The comparative predictability of solvents was a struggle aqueous-system developers had to overcome. That doesn’t mean solvents were perfect.

“Solvents are very good at removing oil,” Carman acknowledged, “but they were never particularly suited to removing particulates. Generally speaking, unless a part was already free of particulates when it went into the vapor degreaser, particulates would still be there when the part came out. That is where aqueous systems truly excel, and, when combined with heat and chemistry, water can [remove contaminants] at a level solvents would never have been able to.”

Miraclean, a division of Chautauqua Chemical Co. Inc., also of Ashville, has taken advantage of the parent company’s ability to develop custom chemical formulations for its customers, Larkin said.

One customer discovered that the cleaning detergent used in its original cleaning line was a highly caustic, chelated solution (one which bonds its ions and molecules to metal ions). As a result, the solution sometimes failed to remove unwanted matter from carbide tools, which contributed to carbide leaching.

Miraclean developed and recommended a mildly alkaline, nonchelated cleaner that minimized leaching and split oils for easier filtration and more-effective cleaning. The product, called RD-531, was so successful that it’s become a mainstay of Miraclean’s catalog. 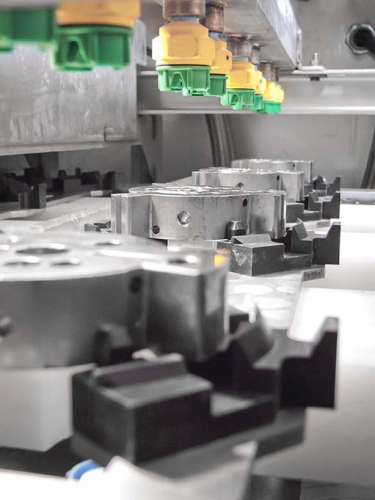 The conveyor belt on spray cleaning systems can be programmed to slow or stop at predetermined points
to ensure crucial surfaces are cleaned. Image courtesy of Alliance Manufacturing.

“We can customize a chemical agent, we can customize specific mechanical actions, we can even customize fixturing for parts going into the baths,” Larkin said. “In that way, we can present the soiling agent to the cleaning solution in such a way that even complex geometries can be cleaned in a production environment.” While it’s a simple concept in theory, she said something that is successful in small-batch testing frequently doesn’t work with high volumes of parts. Alliance, while also making use of advanced chemistries, has realized the potential of automated work cells in parts cleaning. In this way, cleaning can be accomplished unmanned.

“The biggest advantage to automation comes when you get into indexing,” Manninen said, which involves securing parts in fixtures and placing them on a conveyer. “The advantage to indexing is that, as the part moves along the conveyor, you can stop it at specific points to ensure certain facets of the geometry are hit with cleaning fluid. We have made huge advances in terms of fixturing and indexing, which allows us to achieve a very precise and critical cleaning process using, essentially, water.”

The best part about cleaning with water is that most of it can be poured down the drain ... right?

“You should not just assume you can dump your spent fluids down the drain,” Larkin said. “Some of the chemical additives are fairly pH neutral, but some can get as high as 13 on the alkaline side, which means the spent fluid needs to be pH-balanced before it is disposed of, and the same is true on the acidic side.” Ultimately, she said, it comes down to the user’s local sewer ordinances. 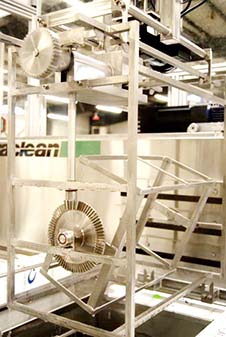 Parts can be moved from station to station in this rotating basket, ensuring fluid is able
to reach every interior and exterior surface. Image courtesy of Miraclean.

Alliance, Manninen noted, is part of the Water Council, a consortium of companies that collaborate to find ways to conserve water. While the company’s location in the Great Lakes region means access to water is typically not a factor, that’s not the case for Manninen’s colleagues in the Southwest, where water is a precious commodity.

“Since the early ’90s, so many great cleaning agents have been developed that are both environmentally friendly and incredibly effective,” Manninen said. “Sometimes that means you can just send the spent water down the drain, as long as the additive is not hazardous and your shop is in compliance with the local sewer authority in terms of parts per million of oil and grease.”

But filtration has come a long way too, so, in a lot of other cases, users can filter out a large percentage of contaminants, which makes up only a small percentage of the total cleaning solution, he added. This means the amount of waste they have to deal with is still small compared to using solvents.

“As with pretty much everything in our line of work,” Manninen concluded, “it all comes down to what is being cleaned off the part.”