Aerospace supplier lives up to challenges

Nothing stands still at Visioneering Inc., and its employees know they need to be ready to adapt to change.

The Auburn Hills, Mich., designer, manufacturer and installer of complex tooling assemblies for the aerospace, defense and space-systems industries got its start in 1953 as an automotive tooling supplier. By 1998, Visioneering had transformed into a full-service design and build company, primarily servicing the aerospace community.

As the aerospace industry has evolved to work with composites and difficult-to-machine materials such as Invar, the equipment that makes the components has become bigger and more complex. 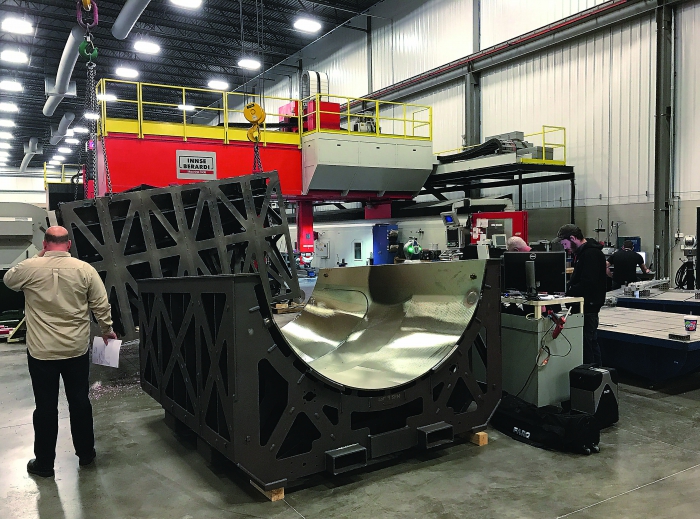 By 2013, the company’s assets were spread across three facilities in Fraser, Mich., creating delays and inefficiencies as jobs moved between departments in different facilities. The company’s response was to build a building large enough to house all of its departments while improving capabilities by adding larger machines.

Last year, the company put the dual-gantry machine to the test by manufacturing three Boeing 777X vent stringer lay-up molds—two 108' (32.9m) tools and one 88' (26.8m) tool. “The tooling requirements were so large that the stringers had to be constructed out of multiple Invar pieces and welded together prior to finish-machining the tool surface,” Elmes said.

The machine operators used the dual-gantry spindles simultaneously during the final machining phase of producing the stringer tooling. “By using the dual-gantry machine, we were able to machine each half of the tool at the same time,” cutting machining time in half on a date-critical program, Elmes said. 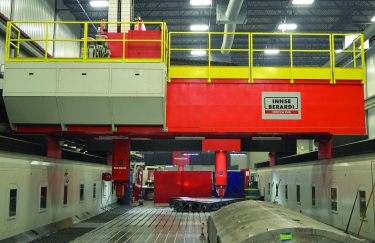 Finnigan described a culture that values open communication among different departments and hierarchies of the company. Without labeling it a gemba walk, he noted that “the CEO is regularly on the floor, I’m on the floor, and there’s an ongoing dialogue with the operators.”

While the company has conducted lean training and kaizen events, he said the emphasis is not on Toyota-inspired activities such as gemba, but rather on an atmosphere where anyone can speak up and everyone will listen to make things better. “Everyone feels vested in our successes.”

That communication style extends to the supply chain. “Our tooling suppliers regularly deal with me, but when they come into the shop, they go directly to the guys in charge of the different machines,” Finnigan added.

Visioneering has repeatedly been recognized by its aerospace OEM customers for its quality and delivery practices, for which the company credits its workers. But the best demonstration of how the team communicates and learns may not be with new equipment but with its older gear. That’s according to Steven Schienke, Visioneering’s maintenance manager, who put everyone—including Finnigan—to the test by getting the company to stop applying coolant in only conventional ways. 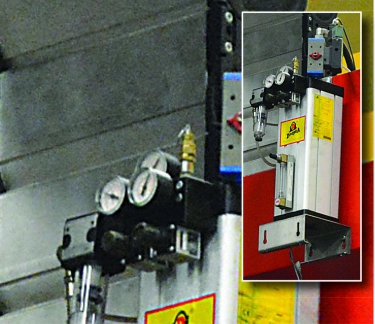 The DropsA MQL system on a Innse Berardi milling machine.

Visioneering routinely cuts aluminum, stainless steel, carbon steel, Invar and copper. The shop has 15 machining centers, ranging from the big Innse Berardis to “our little 5' Hurcos,” he said. At the company’s old facility, the machines were set up for traditional through-spindle, external coolant or both.

As the person charged with machine maintenance, Schienke was well aware of the challenges associated with coolant. “Using coolant required constant maintenance—skimming oil off of it, keeping the pH right,” he said. “The guys were getting rashes, and it smelled. And the operators would often have problems with their injector-style lubrication setups.”

Coolant would drip and sometimes get under the way covers and into the bearings, Schienke added. “Those seals don’t last forever. On my Hurcos, if I pulled back the covers, I’d sometimes see a swimming pool. I thought, ‘There’s got to be a better way.’”

Schienke wanted to try a system without injectors or moving parts. As an experiment, he worked with lubrication-system company DropsA USA, Sterling Heights, Mich., to equip a couple of machines with a minimum-quantity-lubrication, or air-oil, system, which operators could try while retaining the option of applying coolant. 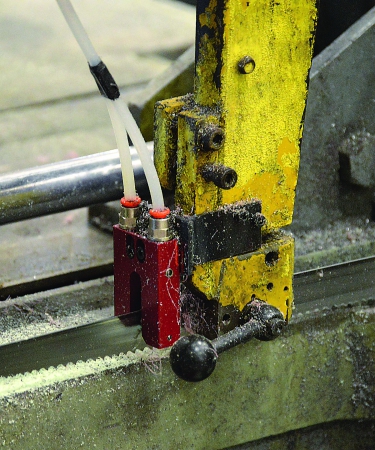 The challenge in developing MQL was in getting it to be easily adapted to all kinds of cutting equipment, said DropsA’s Jason Craft. Here, an external MQL system has been added to a bandsaw at Visioneering.

Schienke said he noticed that the operators using the machines that were set up with both systems tended to stick to traditional coolant for roughing and general-purpose cutting, but “they would always use air-oil whenever they wanted their finish cut to be its best.”

After observing this pattern for a while, he thought, “If we’re getting a better finish with it, why not use air-oil all the time—for every cut?”

DropsA product specialist Jason Craft emphasized that unlike air oil systems such as DropsA’s, mist-lubrication systems pulverize the lubricant. “When you say ‘mist’ in Detroit, you will be walked out of the building,” he said, adding that parts
manufacturers believe they will then need mist collectors and other auxiliary equipment. “We’ve been fighting that confusion for a long time.”

MQL systems have much more finesse, he said, whether they are an external or through-spindle system. DropsA’s MQL system transforms the lubricating oil into an aerosol made up of droplets no larger than 0.5µm in diameter.

“If the droplets aren’t that small, they get pushed together and you get big drops” that will create a mess, Craft said. But when that 0.5µm size is maintained, the result is an easily directed, minimal spray entirely consumed by the lubricating process, and the air stays clear.

In a through-tool MQL system, the aerosol spray goes right into the cut and no farther before it burns away, he said. In the external system, “the oil is a solid in the tube, and the air is there to push it down at a constant velocity.” In each system, “your unit is metering the amount of oil, and it’s a very small amount.”

To better evacuate chips in deep pockets, Schienke added a second air line that blows out the dry chips.

“Visioneering was unusual in the way that they were open-minded enough to work with us to solve chip issues,” Craft said. “It’s a whole journey: getting the unit; getting the air adjusted so that it’s clean, dry air; using the right oil; getting the tools and toolholders changed around; getting the machine prepped; and then getting your operators involved.”

Schienke’s challenge was to first convince Finnigan, and the operators of the modified machines, to let go of a decades-long practice and give MQL a fair shake. 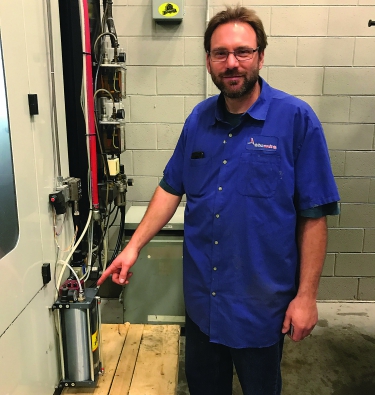 Visioneering Maintenance Manager Steven Schienke has replaced traditional coolant systems with air-oil systems on machines such as the one he’s pointing to.

“That was the biggest battle, myself included,” Finnigan said. “Those operators didn’t see their coolant and all they could think was, ‘I’m going to be breaking tools.’”

“The first guy whose machine was changed over to the MQL system, he wasn’t really happy about it at first,” Craft recalled.

However, the Visioneering culture of open minds and open communication prevailed, according to Schienke and Finnigan.

“The machine operators like that they can see the job—there isn’t all of that spray in the way. And the table is dry, the chips are dry,” Schienke said.

“This change wasn’t pushed on us from the top of the company,” Finnigan said. “It came from middle management and from buy-in from us, Steve [Schienke] and I, and the operators. We put it on a unit, brought people over and showed them how it worked. That’s what it took. Once you get through the transition, our experience was that tool life is better, your part finish is better, and the bronchial problems, the hand irritation, the rashes, all those were eliminated. It didn’t need to be forced down anybody’s throat.”