Edge finders, center finders and wigglers have been used for decades to touch off workpieces during machine setup. They’re inexpensive and simple to use.

Simply mount one in a machine spindle with a collet or drill chuck, engage the spindle to around 600 rpm, and gently touch the device to the workpiece or vise until the finder end “pops off.” Subtract half the diameter of the finder’s tip to determine the zero position for that axis. Repeat the process in the other axis direction. Aside from finding the top of the workpiece, which is something conventional edge finders cannot do, you’re now ready to make some parts. 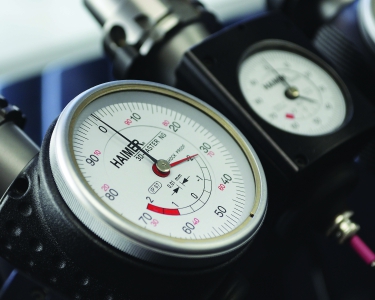 Yet some might argue that these old-fashioned devices are a bit too analog for today’s digital world. Drew Strauchen thinks so. The vice president of marketing and business development at Haimer USA LLC, Villa Park, Ill., said the company offers an assortment of 3D-Sensor measuring instruments that not only simplify the edge-finding procedure, but   also find the top of the workpiece.

“In addition, a lot of our customers use them to measure parts directly in the machine,” he said.

The setup process is similar except for two things. First, the machine spindle is idle when using a 3D-Sensor. As a result, there’s little risk of inadvertently entering too high of an rpm and watching the edge finder tip go zinging across the shop. Second, because the probe-tip diameter is precalibrated, there’s no chance of scrapping a part because of a math error. (Raise your hand if you’ve ever done this.)

“Visit most any shop in Europe and you’ll find a 3D-Sensor on each CNC machine tool,” Strauchen said. “Machinists start using them in trade school and carry that practice forward after graduation.”

Strauchen added that the instruments are catching on in the  U.S.  “People find them on our website or hear about them from another shop,” he noted, “and once they start using one, they fall in love with it.”

According to Strauchen, 3D-Sensors save users considerable time and are accurate within 0.0002"(0.005mm). “It’s waterproof and shock-resistant, so you can leave it in the tool magazine,” Strauchen said. “And if you have an accident, the tip is designed to break away without damaging the probe itself.”

Strauchen said four models are available, and the most popular—the Universal 3D-Sensor—sells for around $435, with standard replacement tips selling for $42 or $72 for the extra-long version.