We all know that as grinding wheels wear and get smaller, they eventually stub out, requiring replacement. But what really happens as they wear? Does performance change? Do wheels act or behave differently as they wear? Do we need to change the grinding or dress parameters throughout wheel life to compensate for these changes?

These types of questions arose while testing a new wheel specification with one of our customers. The company was having issues keeping the wheel at a set dress frequency throughout the wheel’s life. At Norton | Saint-Gobain Abrasives, we believe that a wheel should wear the same from new through stub and that other factors must be affecting wheel performance.

The customer disagreed and felt that what they were experiencing was due to how the wheel changes as it wears. “What we set for an initial dress rate and expect the wheel to do when it is new, cannot be the same near stub,” the customer said. “We need to adjust the dress rate at certain points during the wheel’s life based on its diameter and how it wears.”

They felt that we needed to change how we judged the wheel’s performance, that we cannot expect the dress frequency to be the same from start to finish. Therefore, they felt we should consider an average, not maximum (or initial), dress frequency as a way to judge how well the wheel actually performs.

It is true that a grinding wheel gets smaller as it is applied, and as it does, the surface speed changes.

In addition, wheel wear occurs mostly while dressing, and a softer wheel generally needs to be dressed more often to hold form, geometry or face profile, and will eventually find itself in what is commonly called a “vicious circle.”

This is especially true on older machines and manual grinders where the machine typically does not compensate for wear and the spindle speed is constant, meaning the "softening" of the wheel will continue and increase, as the diameter approaches stub. However, if the grinder does compensate for wear and adjusts the spindle speed to maintain a constant surface speed, this softening is somewhat mitigated.

The performance or behavior of a wheel will change as it wears based on the surface speed changes previously mentioned, but these changes are offset to some degree when the wheel speed is compensated for by the controller on the machine. The customer’s machine compensated for spindle speed, so these speed changes should be considered negligible.

Figure 1a. A grinding wheel can be viewed like a saw blade or a round cutting tool with multiple cutting points, or teeth, along its circumference. All images courtesy of Norton | Saint-Gobain Abrasives

Figure 1b. If we opened up the wheel and laid it flat to make it into a handsaw, the blade length would be the same as the circumference of the wheel. A new wheel would provide a much longer saw blade than a used wheel.

Figure 1c. As we use the wheel, the circumference will continue to get smaller or, in our example, as we keep cutting the material, the blade will continue to get shorter and shorter. The saw with the long blade will need less effort, remove more stock and cut faster than the saw with the short blade. The small saw will need more strokes and take more effort to do the same work.

On the surface, it seems that what the customer said makes sense. How can a small grinding wheel do the same work as a large wheel? How can we expect the same performance and results near stub diameter as we do when we first install the wheel? Clearly, we will need to adjust how the wheel is used–right?

The short answer is no. When we look closely at what is really happening, we will see that the changes to the wheel based on wear are negligible, and that maybe other factors are affecting this particular operation.

Let’s first look at how surface speed changes that result from wear affect the wheel.

For the purposes of this article, we will work with the following parameters.  The wheel is 42 x1½"x12" with a straight face (no profile) and is dressed with a 5"-dia. diamond roll that has a 0.197"-wide diamond segment, running at 1,600 rpm with a dressing traverse rate of 8.00 ipm. The part diameter is 3.797" and, because most wheel wear occurs when it is dressed (wheel wear from grinding is considered zero), we will use a DOC equal to the regular dress depth of 0.030mm (0.0012").

Based on what we know by convention and experience, the grade or hardness of the wheel is controlled by increasing the spindle speed as the wheel wears. So the wheel behaves the same at the new-wheel diameter as it does when it approaches the stub diameter. The amount the grade changes, or how much softer it will act as it gets smaller, has never really been studied in detail. (The rule of thumb is that the wheel will shift approximately one grade for every 1,000 SFPM change in wheel speed.)

At some point, the spindle will not be able to keep pace to maintain the surface speed of the wheel and, at that time, the wheel will keep acting softer and softer until it stubs out. On grinders that do not compensate speed for wear, this softening happens more quickly and consistently.

Knowing that grinding wheels are designed to behave consistently from new to stub, all our experience supports that the dress frequency of a given wheel or set should remain the same throughout its entire usable life. Any subtle changes in the wheel’s grade or its tendency to act softer as it wears, are being offset or compensated for by the slight increase in the “effective” hardness created by how a wheel is dressed (i.e. due to the increased overlap ratio, which close the wheel face). As a result, the wheel should perform the same throughout its entire usable life.

To explain changes to the wheel’s performance because of reductions in the contact length, we need to take a close look at the process. Analogous to making cuts with a saw, on the surface a longer saw will cut better with less effort, but it isn’t just the length of the blade that needs to be considered. We also need to look at how much of the blade is in contact with the material being cut or, in our case, how much of the wheel is in contact with the part. To calculate the contact length of the wheel, we need to look at the equivalent diameter of the operation.

Again, for the purposes of this article, we will work with the previously stated parameters. 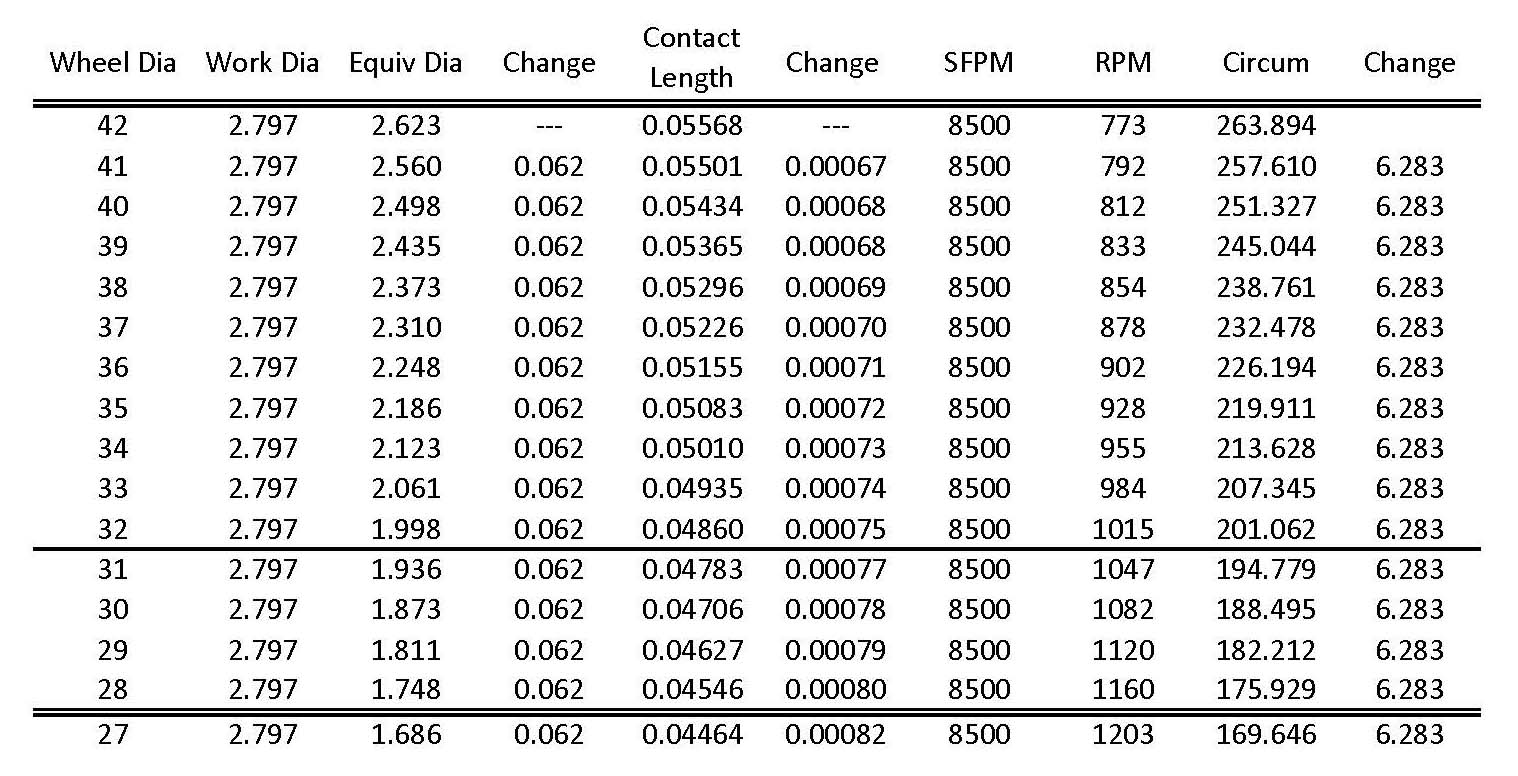 A 42"-dia. wheel would require a 14" flange based on ANSI Standards. That means the absolute minimum wheel stub diameter would be 28". However, most grinders have the wheel stub out an inch or two from the flange, meaning the stub diameter is more likely around 32" (indicated above by the single and double underlining).

The above calculations show that the equivalent diameter and contact length of the wheel does get smaller as the wheel wears. This would suggest that the wheel should act softer as the customer’s engineer suggested, but the amount and rate of change is so small and steady that any significant change in the wheel’s behavior or performance is unlikely.

More likely, the minor softening of the wheel caused by the changes in the contact length is offset by the changes in how the wheel is dressed. We know that as the wheel wears, the overlap ratio of the dresser changes, resulting in a more closed and harder-acting wheel.

When we take everything together, it is proven that in a grinding system that maintains a constant wheel speed, a properly specified and designed grinding wheel should behave and perform the same at its stub diameter as when it was new.

Therefore, unless there are other factors influencing the wheel’s behavior, the grinding wheel should not require any adjustments or changes to maintain its performance. It should be noted, however, that in a system that does not compensate for wear, the wheel will wear more quickly and therefore, its performance will be altered due to the changes in surface speed and the continual softening of the wheel.

Finally, in most systems, the controller may only adjust wheel spindle speed (rpm), and not adjust for dresser wear or increases in dresser speed (rpm) as the wheel wears. Even though we can show that in a speed-compensated system, the wheel behaves consistently through its whole usable life, as would be expected. To truly optimize and maintain the system, the grinding program should also adjust or compensate for the dresser speed and overlap ratios to maintain wheel face and dress conditions.