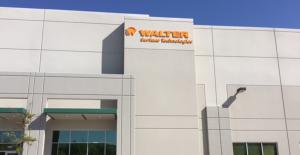 Walter Surface Technologies, Dallas, in March announced the opening of a 22,000 sq. ft, distribution and training center in Dallas. Located at the Freeport Corporate Center, the new facility directly serves 20 states throughout the Southern and Western United States.

“Walter is excited to open the Dallas facility to support our business expansion in the Southern and Western United States as well as provide dramatically improved service to our distributor partners and customers in those areas,” said Jim Welch, president of Walter Surface Technologies USA. “The warehouse will specifically stock Walter’s most in-demand products for the region, putting the goods much closer to where the work is being done.”

To further support the growth of the Walter business, part of the facility will be a dedicated advanced training center for Walter’s distributor metalworking specialists and sales teams. Local training facilities make it easier for national distributors in the South and West to gain hands-on access to Walter trainers and products.

“Walter has doubled the size of its sales organization in this area, and the Dallas location will provide additional support to our partners and customers,” said Welch.

Dallas is strategically located in relation to Walter’s other distribution centers and offers many logistical advantages.  The Dallas Forth-Worth airport is the third busiest airport in the world and is less than 10 minutes away from the facility.  Many major carriers are located nearby, and Dallas is a major road transportation hub. Further, the ports of Houston and Galveston will allow deliveries direct from Walter European facilities.

The facility’s warehouse and training centers are already in full operation.