Productive Times: Getting a grip on automation

CHALLENGE: Cost-effectively integrate automation into the production of eyewear frames.

SOLUTION: A collaborative robot tooled with an easy-to-use, flexible gripper.

Since the 1980s, foreign interests have bought U.S. eyewear manufacturers that produce high volumes of acetate frames, temporarily halting domestic production in the process. Two years ago Brian Vallario, an architect, and Gerard Masci, a finance worker, decided to help bring back U.S.-made acetate frames. They launched Lowercase in New York and began production in January.

From the beginning, the two founders understood that automation offered an avenue to lower production costs without sacrificing quality. They researched a variety of different robots, including some highly industrialized offerings. However, they quickly realized that purchasing a robot and integrating it into production carried two different price tags.

“The cost to automate was extremely high, but we were always able to get our heads around that because of the value that the robot would add to the process,” Masci said. “The main problem was that the integration cost of most robotic solutions was three to four times the cost of the solution itself.” 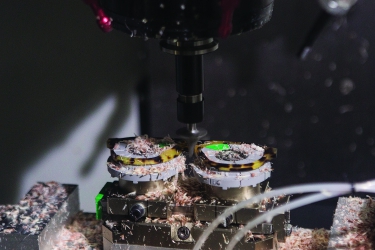 Integrating an industrial robot can cost hundreds of thousands of dollars, according to Vallario. “That wasn’t really possible for us.”

The high-cost scenario changed with the assistance of Axis Inc., a Somerville, N.J., distributor of industrial automation equipment. “When Lowercase came to us with their design concept, our automation engineers put together a cost-effective solution that was flexible enough to be redeployed as their business grew,” said Cynthia Kradjel, account manager for Axis.

She said Axis recommended a UR5 collaborative robot from Universal Robots USA Inc., Ann Arbor, Mich., because it is easy to program and change how the robot is deployed. For the end-of-arm tooling, Axis chose a two-finger gripper from Robotiq, Lévis, Quebec. “We felt that it can accomplish the types of movements in a very repeatable and practical way,” Kradjel said.

Lowercase ordered custom fingers and added rubber padding at the contact points to more effectively hold the acetate parts. The relatively soft plastic doesn’t require a lot of TLC, Vallario noted. “You can be pretty rough with it until it goes through the finishing process.”

Flexibility and ease of use were the gripper’s two primary attractions, Vallario said. Programming the gripper is done on the same touch pad with graphic interface that is used for programming the robot. “The gripper is priced great, but being able to make adjustments on the fly and make changes to its fingers are big benefits. It integrates right in with the robot.”

Axis also introduced Lowercase to automation integrator Jeff Richlin, president of Richlin Manufacturing Inc., Farmingdale, N.Y. He designed a platform where the robot stands and a solenoid-based solution so the robot can communicate with the CNC machine, placing parts in the machine and removing them as needed. In addition, Richlin set up the wiring and pneumatic controls.

The integration took a week and cost about 25 percent of what Lowercase paid for the automation equipment, Vallario said, who programmed the robot’s movements. “I don’t come from an engineering or robotics background, yet, within a couple days, we had it up and running. It’s quite simple.”

To machine the frames, Lowercase mounted two custom vises onto a rotary indexer in the machine. The robot picks up the raw material and loads it into the vise that clamps along the part’s outside edges so the machine can cut the shapes of the lenses and their grooves, closes the door and presses the “go” button. It then removes the part, the indexer flips over, the robot places the part in the second vise, which has two lens-shaped discs that expand to hold the part from inside the frame, and the machine cuts the exterior profile. The robot then removes the finished part and places it in a bucket.

Each production batch in the CNC machine averages 500 units, with around 30 to 40 units of each frame style.

Next, the eyewear goes through numerous finishing steps before it is packaged and shipped, Vallario said. This includes four different barrel-tumbling processes, with each tumbling consuming 22 hours, and a manual buffing operation.

Even though part volume is under the capacity of the three-person shop, Vallario said automating work is important.

“Eyewear production is a very labor-intensive process, and we are such a small team that any improvement we can make on our efficiency is huge,” he said. “Having a product that allows me to sit at the computer and work on design or go work on the more labor-intensive stuff that can’t be done by machines is a big plus for us.”

CHALLENGE: Cost-effectively integrate automation into the production of eyewear frames.

SOLUTION: A collaborative robot tooled with an easy-to-use, flexible gripper.