Craig Brosius, president and CEO of American Concepts and Technologies Inc., said his job shop focuses on “innovation and diversity.” ACT, Anoka, Minn., serves customers in numerous industries, including companies such as TorchLAB, a maker of compact flashlights.

Tom Goetzen, TorchLAB owner and engineer, said his modular, high-performance flashlights, trade named Moddoolar, are virtually “future proof” because they have interchangeable bodies, switches and heads. “As technology changes and as people want newer technology and even more power in a flashlight, we can fit anything they want to our standard platform,” he said.

The lights incorporate three advanced LEDs with a total output of 800 to 1,100 lumens, roughly equivalent to that of a typical low-beam, halogen automobile headlight. The flashlights have a maximum diameter of 1.25" and overall lengths from 3.75" to 7.75".

Goetzen approached Brosius to machine the tubes that hold the lithium energy cells. Brosius produces five different versions of the cell tubes, all identical except lengths range from 2" to almost 6".

The machining process begins with 1⅛"-dia. 6061-T6 aluminum bar stock, cut into 3 '-long sections and fed through the 2"-dia. through-hole spindle of a 2010 Mazak QTN-150 CNC lathe. Brosius first faces and OD turns the bar with a Kennametal CNMP431 coated carbide insert. He noted that nearly all of the shop’s metalcutting tools are from Kennametal, and all the cutting tools referenced in this article are from Kennametal.

Then, instead of applying a conventional knurling tool to form the knurl pattern into the workpiece surface, Brosius employs an efficient, controllable and repeatable method to knurl the central section of the cell tube. That’s because Goetzen was dissatisfied with the consistency of common knurling techniques.

“It is very difficult to specify an exact knurl pattern, depth and feel,” Goetzen said. “Sometimes it is too sharp, sometimes it’s too smooth, and the depth of the impressions and the width of the diamond shapes can be difficult to control. It can vary from one run of parts to the next, even from the same shop. Beyond looking nice, the body of the flashlight is what you hold in your hand, and how it feels and the grip it provides is really important.”

Goetzen said he experimented with different patterns and depths on ProEngineer Wildfire CAD, and “eventually came up with something that looks great and performs well also.” Five-axis milling with a ball endmill can produce a knurled surface, but that typically creates unwanted deep valleys and sharp corners, he noted. “I wanted something that was a little more aggressive without the typical abrasiveness of a deep knurl,” Goetzen said.

Goetzen and Brosius decided to turn the knurl on the Mazak lathe. “To get the diamonds to the right size and figure out what kind of tooling to use, I started playing around with the threading options offered by the Mazatrol conversational CNC,” Brosius said.

The chosen pattern was a 12-entrance thread with a 1½" pitch. Instead of cutting a single path around the bar, as in a simple screw thread, the toolpaths start at 12 points around the bar circumference. Each toolpath creates a spiral entirely around the part. Twelve threads are cut with a Top Notch 0.125"-wide, full-radius, right-hand grooving insert. Then the lathe spindle is reversed, and a Top Notch left-hand tool cuts 12 threads the other way. The reverse set of spirals on top of the first set produces the diamond-shaped knurl pattern. Each spiral is cut in a single 0.010"-deep pass.

Typical threading speed for an aluminum bar of this diameter would be 300 to 400 sfm, but with the 1½" pitch of the spiral, the tool is “moving pretty quickly” at those speeds, Brosius explained. So, to minimize stress on the machine tool, he slows the cutting speed. “I got the best finish at 100 sfm,” he said, “and it mimicked about 50 percent of the speed of my rapids, kind of an even flow back and forth over the part.”

The low-force nature of the knurling process enables Brosius to produce the knurl on the three shorter tubes without the use of a tailstock. For the two longer versions, after facing and OD turning the part, he center-drills the bar face and brings in a programmable tailstock for support during knurling.

Brosius noted that the knurl starts and ends in the middle portion of the cell tube. “By doing some calculations and changing the starting points and end points for the thread, I am able to keep that accurate within a couple thousandths.” 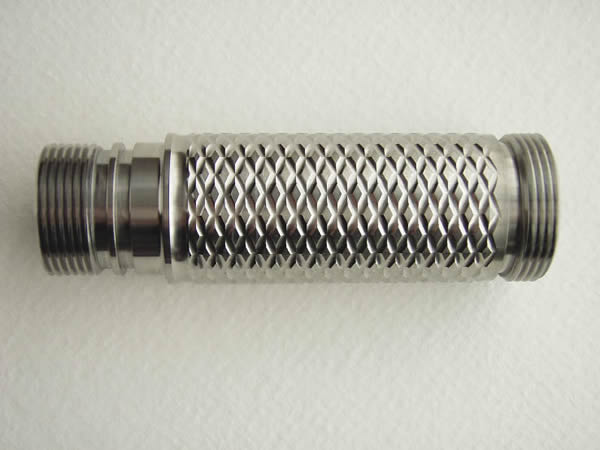 American Concepts and Technologies machined all details of this aluminum cell tube for a TorchLAB high-performance flashlight, including its unique "Diamondback" knurl pattern.

After cutting the knurl, Brosius machines three O-ring grooves around the OD, one at one end of the tube and two at the other. Rubber O-rings later seated in the groove guarantee sealing against the elements.

Brosius cuts the O-ring grooves with a Top Notch 0.031"-wide coated insert run at 800 sfm and 0.007 ipr. He then machines a 1-20 thread at one end of the tube and a ⅞-20 thread at the other end, for the flashlight end cap/switch and head, respectively.

The tube ID is drilled with a Kentip 0.720"-dia. modular drill, run at 1,000 sfm and 0.015 ipr. The drill does not penetrate the entire finished length of the tube and leaves about 0.008" excess per side for finish boring to a diameter of 0.736". The no-peck drilling cycle takes about 9 seconds for the longest tube.

A ⅝"-dia. boring bar tooled with a CCGT2151 indexable insert finishes the bore and leaves a 0.04"-wide shoulder at its bottom. A 0.650"-dia., solid-carbide, through-coolant drill then completes the bore through the full length of the tube.

Tolerances for the O-ring grooves are ±0.001". According to Goetzen, Brosius “really has the process dialed in. The parts are looking fantastic.” Goetzen has trade named the tube pattern “Diamondback” knurling.

Brosius machines the tubes in lots of 500 to 600 pieces, after which the tubes are tumbled and hard-coated by TorchLAB. CTE