Tim St. Martin knew there had to be a better way of fixturing parts on his company’s 5-axis machine tools. “We’d visited some of our suppliers and saw how they were holding parts on their 5-axis machines,” said the senior manager of manufacturing engineering for Carlsbad, Calif.-based orthopedic implant manufacturer Alphatec Spine Inc. “They were mounting the blanks into a ‘picture frame’ and then screwing that frame to a tombstone-mounted fixture. This basically limited access to one side of the workpiece per operation. Many in our company thought we should hold them the same way.”

Management charged St. Martin with finding the most effective way to produce a family of titanium spine plates. Alphatec had purchased a pair of 42,000-rpm Mikron HSM 400U LP 5-axis machining centers to bring machining of its Trestle-Luxe anterior cervical plating system in-house.

In particular, Alphatec needed an optimal way to fixture the parts because it would be making a family of 33 different part numbers with production volumes of more than 1,700 pieces per month. While the company considered making its own fixtures, contacts at GF AgieCharmilles, builder of the Mikron machines, suggested Alphatec look at workholding from 5th Axis Fixtures Inc., San Diego, which specializes in workholders for 5-axis machines.

St. Martin focused on the PY6420D1151S clamping system, which utilizes a dovetail-shaped clamp to grip premachined workpiece blanks from one edge, allowing access to five sides in one machining operation. The operator places the material in the fixture, tightens an Allen screw and the clamping system draws the material down onto the ground face of the fixture, ensuring repeatability in the Z-axis.

St. Martin said: “I told the other team members there are a hundred different ways to present the workpiece to the tool so let’s give this one a shot. If it doesn’t work, we’ll try it with a picture frame. But we hit the ground running with this thing. It fit perfectly with what we were trying to do.”

Before selecting the PY6420D1151S, Alphatec had examined several different workholding methods. The shops that previously made the spine plates for Alphatec located the blanks with a pair of precision-ground holes onto fixture pins, machining one side, flipping them over to hit the back and then clamping them down to cut away the web of material they had used to hold the parts. “Even on the small plates, it was a long cycle time, plus all the handling,” St. Martin said. 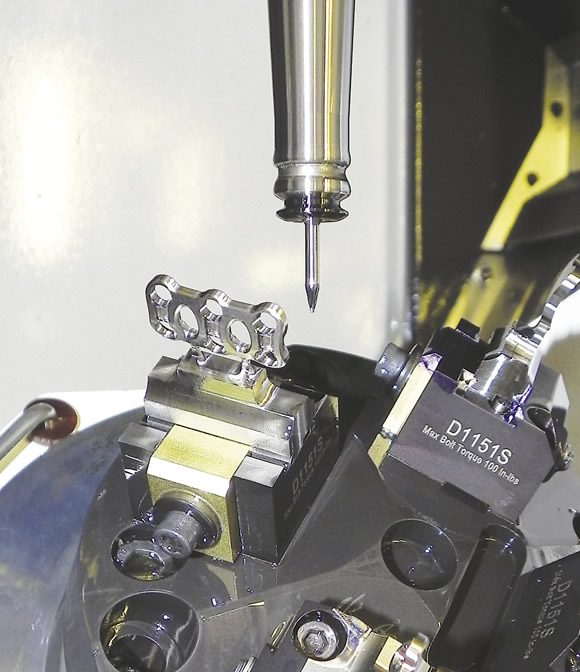 Initial results with the 5th Axis workholders were excellent, reducing the number of operations on the Mikrons from three to one. Since then, the process has been further improved. “We’ve taken a lot of machining time off the Mikron spindles by moving the roughing operations to our Haas vertical machining centers,” St. Martin said. This simple step eliminated 25 minutes of cycle time on the most expensive machines in the shop and significantly reduced overall manufacturing time.

“The shop was using the Haas VMCs to machine dovetails and locating features on the workpieces so they could be held by the 5th Axis system, so we threw in an endmill rougher. It only takes a couple minutes to rough 1/8" or so of material from each side of the part that we now don’t have to remove on the Mikrons.

“For the most part, it’s one and done off the Mikron,” St. Martin continued. “Prepped material goes in and finished parts come out. There are just two small areas that need blending afterwards, from the tabs that hold the part during machining. Snap the part off the blank, throw it in a Haas machine for a little finishing work, and you’re done. Overall, we’ve increased process efficiency by 45 percent.”

What about setup time? St. Martin said the shop is doing a fair amount of changeover, with lot sizes ranging from four to 64 pieces. “We use the same 5th Axis base fixture for everything. The parts run from 10mm to 69mm long and the material all uses the same origin point.” As a result, setup time is almost zero. “You just load the program up and start cutting,” he said. “The longest part of setup is measuring the first piece on the coordinate measuring machine so we can release the machining center for production.”

Better yet, the majority of that production is unattended. Alphatec Spine runs three shifts. Each machine has three fixtures, and cycle times run from 20 to 40 minutes per piece. After a pallet is loaded, the machine runs unattended. As a result, the shop gets 8 to 12 hours of lights-out machining each day.

St. Martin and the Alphatec team pursue continuous improvement and plan to begin using the P4344D051251WM, a taller version of its current fixture. “Six months ago we tried the taller pyramid and were really impressed with it,” he said. “With the fixturing we’ve been using, the angle is so low that, on the longer plates, the material hangs over the edge of the pallet. You run the risk of hitting the B-axis, and it can interfere with the pallet changer. The new one lets us machine completely around the part without going outside the diameter of the pallet.” Alphatec recently ordered six more P4344 fixtures.

Mathew Evans, director of sales and marketing at 5th Axis Fixtures, noted the company is working to improve its existing fixtures with additional features. The company is also a machine shop and uses its workholding in-house.

“As a result, we’ve come up with a lot of trick features,” Evans said. “There’s a removable locating pin on the top, so you can take the whole clamping mechanism out to check your part or move it from machine to machine and know you’re going to repeat within a half thou every time. There are also two removable dowel pins if you want to stick it on a tombstone or incorporate it into a different system.” CTE